When you think of ranunculus, you probably think of a plant with green foliage and yellow single flowers. But now, more appearances are on the market. A German breeder invested years in breeding new varieties of this species with new colors of foliage and flowers. Next to the expansion of colors, it also flowers earlier than many regular ranunculus varieties. In 2017, US broker Fleurizon supplied the first young plants of these new ranunculus varieties to German growers and were completely sold out soon in that year. For this year, the German ranunculus breeder triples the production of young plants and together with Fleurizon, they are eager to expand markets to the Netherlands, Denmark, UK and France. 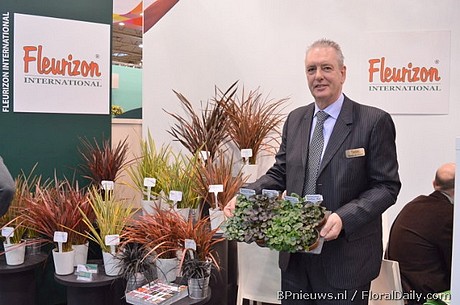 Yoko Sun
Yoko Sun is the name of this new ranuculus series. The series consists of 10 varieties that differ in foliage color, flower color and flower type. "Usually, ranunculus is a plant with green foliage with a single yellow flower.", explains Frank de Greef of Fleurzon. "These ranunculus series, however, consist of varieties with light green leaves, dark green leaves, blackish leaves, yellow single flowers, double flowers, orange, white flowers and so on. It is really something different as we have not seen ranunculus as a series like these before."

Next to the different color combinations, another important characteristic of this variety is the fact that it can flower earlier than regular ranunculus plants; around two to three weeks. "When grown in a greenhouse, growers can finish them in late February, the beginning of March." Triple production
Last year, Fleurizon started to supply German growers with the first varieties of the Yoko Sun series. "We sold all young plants that our German breeder produced, which was around 60,000 young plants." The reactions on the varieties were very positive and the breeder and De Greef therefore decided to increase this year's production. "For 2018, we will have around 200,000 young plants available." And next to supplying the German growers, they are also eager to expand markets and supply growers in the rest of Europe."