The heat in Europe is not only affecting many European growers, it is also impacting growers elsewhere - the ones who are exporting their products to this continent. Kenyan rose farm Uhuru Flowers, for example, feels the heat in the export figures. "In the rest of the world, the sales are OK, only in Europe, the sales are down", says owner Ivan Freeman. 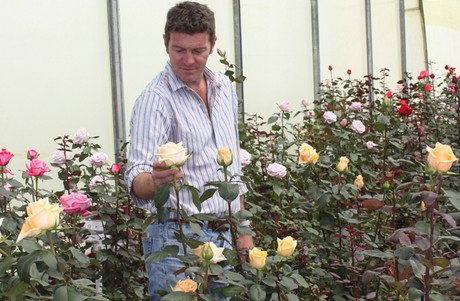 Ivan Freeman in the greenhouse
Lower production volume
In contrast to Europe, it was not that hot and dry in Kenya. In June and July, quite some rain fell in many parts of the country and it affected the crop of several farms. The production volume of Uhuru Flowers also went down a bit. Their roses are grown on the northern slopes of Mount Kenya at an altitude of 2600m above sea level, making it one of the highest rose farms in Kenya. "As well as many other farms, we have had to deal with a little botrytis and downey mildew." But according to Freeman, the impact of this decrease in production was matched by the low demand from Europe.
Chinese Valentine's Day
Now, Uhuru Flowers is back on track again. "It stopped raining and it is starting to warm up again, which enables our crop to recover." And this is just in time, as Freeman is busy preparing shipments for Chinese Valentine's Day, which will be celebrated on Friday August 17 this year. Uhuru Flowers supplies flowers directly to over 60 countries all over the world, and China is one of them. "It is not our biggest export country, but we have some nice orders." And in contrast to Valentine's Day in the US and Europe - that mainly demand red varieties - for China, Uhuru Flowers is supplying a broad range of roses, particularly the special and different colored roses and garden roses.
Looking ahead
After Chinese Valentine's Day, the demand for roses will decrease a bit and will really start to increase from October onward, towards the end of the year. "In August, we will have to supply some roses for weddings in Europe and afterwards, when the weather gets colder and Christmas nears, the demand will increase again."
For more information
Uhuru Flowers Ltd
Ivan Freeman
Email: ivan@uhuruflowers.co.ke
www.uhuruflowers.com