All current ornamentals and varieties in one app : Flowerbook

During the IFTF in the Netherlands, the Flowerbook app was launched. Currently, the app is being used by 4,000 people all over the world. “Initially, the app was introduced to support florists and event planners, but the app turned out to be very interesting for flower breeders and growers too”, says Robin Hesselberth, who invented the Flowerbook app with Fabian van Dijk.

Hesselberth is a buyer at a floral wholesaler in the United Kingdom and came up with this idea after receiving many questions from florists and event planners about finding the right flowers for particular projects and designs. In the app, each flower listed is matched to a colour guide and all the information about the flowers including pictures, if it is grown all year round and where it’s grown can be found. The app contains over 5,000 high quality images and one can search by variety, type or colour of flower. 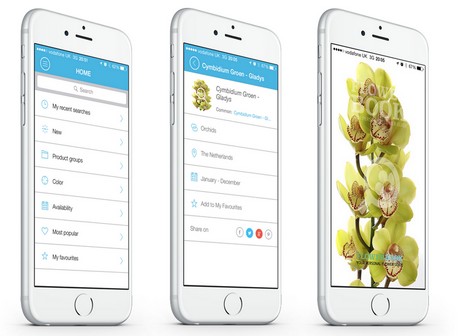 By reaching a large number of users in just a couple of months, the app already proved to be a success. This, however, does not prevent Hesselberth from introducing new innovations and improvements. At the moment, innovations that will attract a wider audience are waiting to be introduced. These innovations will be interesting for flower breeders and growers in particular.

For flower breeders, the app will be an interesting tool in the future. There are plans to make a ‘showroom’ in which flower breeders can present their new varieties. Then, the Flowerbook app users can grade these varieties and give comments. Afterwards, this info will be supplied to the breeders. "It enables the breeder to form a clear picture about popular varieties, colours and shapes in different countries."

Also possibilities for floral growers are investigated. For example, a connection between the flower and the grower can be made by adding the growers' name underneath an image. "We would like to enhance the experience of the product and this can be done by adding more images and probably also videos", says Hesselberth.

Currently, the app is in English, but 6 languages will be added this week. So, then, the app will be available in English, Spanish, Polish, Russian, French, German and the Czech language.