"A lot of our technology and knowledge that we have comes from Europe," says Ted Oorsprong of Northend Gardens in Jordan Station, Canada (ON). For years now, this medinilla grower has been working with European companies to enhance their quality and the productivity of their crop. 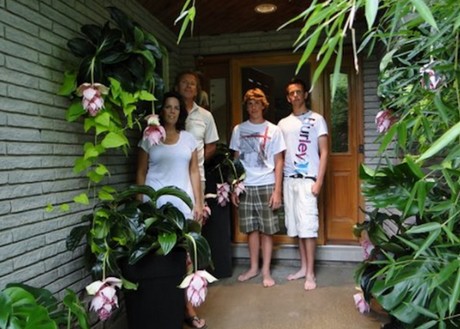 European technologies
Northend Gardens is the only weekly flowering year-round medinilla grower in North America. In order to realize a year-round production, modern techniques are required. Interestingly, most of their techniques come from European companies. For example, their shading system, which is very important when having a year-round production, comes from the Swedish company Ludvig Svennson. "We are working closely with the Swedish shading company Ludvig Svennson to optimize our shading system. They advise us how and which shading materials to use and afterwards we order the products at the Canadian Company called VRE Systems who imports and installs them in our greenhouse," says Ted. Also their automatic transportation system comes from Europe. "Recently, we bought a used transportation system from the Dutch business Debets Schalke. This transportation system was once used in a greenhouse in De Lier, the Netherlands. This company went bankrupt, so we purchased their transport system. Last year, Debets Schalke shipped the transportation system to Canada where we installed it ourselves in September of this year. With this installation, our farm went from 50% rolling table installation to 100%," says Ted . 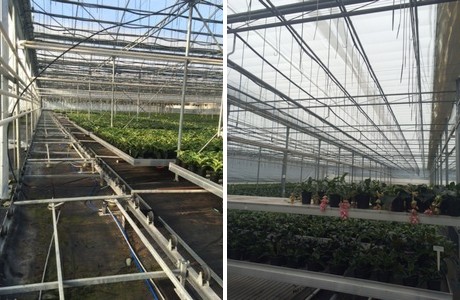 A photo from the installation of the rolling table system which is an integral part in medinilla production.

Dutch Knowledge
Besides the techniques, also the knowledge comes from Europe and from the Netherlands in particular. Regarding the shading system, they communicate on a weekly basis with the Dutch advisers of Kwekerij Atlantis. "Once or twice a year they will visit us. However, we also go to the Netherlands to visit growers and to learn more about their greenhouses and the techniques they use," says Ted. Regarding the cultivation of the medinilla crops, they have close contacts with a Dutch medinilla grower Kwekerij Atlantis. "Atlantis' Rob Scheffers supported us with the startup of our medinilla production in 2012, and still, he is putting a lot of effort into helping us to grow a high quality crop," says Ted. Also regarding introducing and trialing new varieties, Ted has close contacts with a Dutch breeder and grower. "Last year we started up a partnership with Corn Bak, a Dutch bromelia grower and breeder of medinillas. We started trailing new varieties of their medinillas. So, in the next year or two, we hope to come up with three or four new colours."

Northend Gardens
Currently, around 50% of their 2 ha sized greenhouse is used for their medinilla production and 50% for spring bedding plants and hanging basket plants. Two medinilla varieties are being produced, namely Medinilla Dolce Vita and Medinilla Magnifica. In the future, they are planning to expand their medinilla assortment with the help of Atlantis and Corn Bak.