Together with Timbuk Farms, Landmark Plastic designed a new tray. According to Timbuk Farms' co-owner Jim Gibson, this new tray is a big labor saver. Currently, they are using the so-called Accordion tray for the young plant production of several crops. Steve Beall holding the Accordion Horticultural Tray at the Cultivate '16, when they launched the tray.

Time-consuming
Timbuk farms is a finished bedding plant grower and a rooting station of young plants for Dümmen USA. One of the crops they are growing to young plants is the Rieger Begoina. And the cultivation of this young plant was a bit more time consuming than the other crops they have. This mainly had to do with the trays they were using, which were strip trays. "In general, begonias need more space to grow and develop. When using the standard strip trays, we remove every other row to give the crop that extra space to grow. And when they are ready to be shipped, we put them back again to save space during transportation. All in all, it is a quite time-consuming job", explains Tim Gibson. 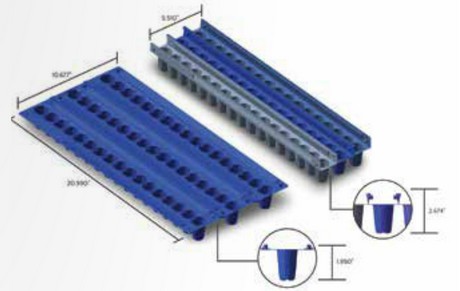 Accordion tray
In order to save time on doing this, Timbuk Farms decided to invent a new tray. So, together with Landmark Plastic, they designed a tray, the so-called Accordion tray, that not only saves labor, but also provides a better micro climate for the Rieger Begonia production. "As the name indicates, it works like an accordion", says Beall. "It is a collapsible tray; the strips are connected to each other and can easily be broadened due to the retractable strip in between the rows. In this way, not every other strip needs to be removed to give the plants more space to grow. And afterwards, when they are ready to be shipped, the tray can be folded in again which also saves space during transport", says Beall.

And saving time means saving money. According to Gibson, the labor savings they calculated at Timbuk could be as much as $.30 a tray in the whole production process between sticking in shipping.

In addition to labor savings, it is also more efficient to not have to handle individual strips. Now with the new accordion tray everything will be handled as a tray of 51 cells. So when the two are closed together they will equal 102 cells in a tray which is a standard in the US industry", says Gibson. 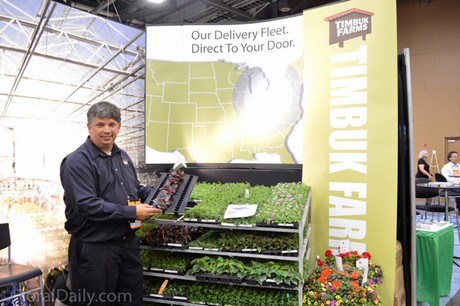 Also Jim Gibson of Timbuk Farms was exhibiting at the Cultivate. In the photo he is holding the Accordion Horticultural tray.

More crops
Initially, the tray was designed for the Rieger Begonia production of Timbuk farms, but they noticed that the tray is also good for any crops needing the extra space. Currently, Timbuk farms uses the trays for their geraniums and XXL dahlias. And since the launch at the Cultivate' 16 the trays are also available for other growers through Landmark Plastic.