While still experiencing the joy of running a successful hydroponic rose and berry farm on the Central Coast of New South Wales, Australian greenhouse growers Nicky and Wade Mann will soon be forced to look at other opportunities. After leasing the greenhouses to the couple for more than 14 years, the landlord is looking to sell the property, forcing the Mann's to re-invent themselves.....Again.
Nicky and Wade Mann's greenhouses are located on leased land for which they have a contract till the 18th of December, depending on the plans of the landowner. "There are many things changing, going on with zoning and regulations as a result of the mergers of local councils and shires. Due to this most of the local zoning plans are on hold till at least next year, so we are quietly confident that we will have one more year. Hopefully this will give us more time to look at other opportunities."
Whether they will need to move this year or next year, Nicky is quite confident that they will continue their horticulture adventure, on which even bigger challenges crossed their path in the past. The couple once ran a 6 hectare rose farm in their home country Zimbabwe. During the violent era of president Robert Mugabe's political reforms, the couple was forced to leave their beloved farm and employees behind and seek new opportunities elsewhere in a new country.
And that country happened to be Australia; the couple managed to prove to the Australian government that they were worthy of citizenship and started a new flower business on leased land on the Central Coast of New South Wales. They started with a small 3000 m2 multispan greenhouse which they soon expanded with another 3000 m2. Fourteen years later the couple operates a local flower business with three stores, a webshop, plus they successfully added a whole range of hydroponic berry crops. 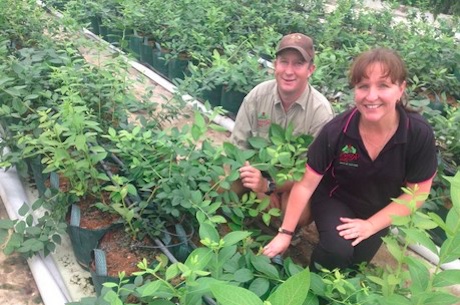 Wade and Nicky between their hydroponic berry crop
Now that the lease of the land is ending, the couple is again forced to re-invent themselves. They have scheduled meetings with companies to talk about joint ventures and possibilities to see how they can translate the experience they gained with their hydroponic soft fruit cultivation onto a bigger scale in Australia.
"The hydroponic berry cultivation at the rose farm has been our playground, our learning, our school." said Nicky, who has been a berry enthusiast ever since she got to travel the world analyzing the global berry industry as part of a Nuffield Scholarship. "We see huge chances for berry production here, especially with good opportunities in nearby export markets."
Nicky referred to the fact that there is much happening in Australia and many people are gearing up to increase the domestic horticulture production in order to target easy accessible export markets, such as Hong Kong and Singapore.
"Yes, airfreight might be expensive, but in the end it is all about having a high value crop and a high paying market. Therefore many people are excited about soft fruit production. We also see these opportunities and it is our dream to be part of this and grow berries on a much larger scale."

The couple between their rose crops.
According to Nicky, the climate in Western Australia is extremely suitable for growing berries. See is specifically looking to the area North of Perth. "Those areas have a climate which is comparable to Portugal and Spain. It is quite dry, there are many hours of sunlight and it has a low humidity."
But before that dream can come true, the couple will need to meet and convince the right people. "We now have meetings coming up and are making proposals to investors to discuss our plans and reviews our proposals to establish either 2, 5, 10 or a final scale of 20 hectares of fruit production."
Nicky explained that they are looking at quite a diversity of crops and supply. “We are are discussing the possibility to grow a wide array of crops and build a brand around that. Berries are a good market, but within five to ten years that industry will be getting under pressure too. Hence it will be foolish to put all of our eggs in one basket. With our scholarships we have been lucky to see what is happening around the world and realize that a consistent market and supply will be key."
Click here to contact Nicky by e-mail.