If you are planning to attend the International Floriculture and Horticulture Trade Fair (IFTF) and/or FloraHolland Trade Fair in the second week of November, you might also consider visiting some companies that open their doors or are organizing trials. One of the companies that is organizing trials is French cyclamen breeder Morel Diffusion. From November October 31-November 30 and from November 7-10, they are showcasing in 's-Gravendeel, the Netherlands.

If you are not able to visit the trials that week, no worries. Later that month, from November 13-24, they will open their doors of their location in Frejus, France.

31 October - 3 November in 's-Gravendeel, the Netherlands
The first opportunity to visit the cyclamen production trials of Morel is from October 31- November 3 at their new location in 's-Gravendeel. At this location 49,000 cyclamen are presented. The trial location is open from 09:00 - 17:00 and can be visited by appointment.

Click here to register for the trials at www.cyclamen.com. 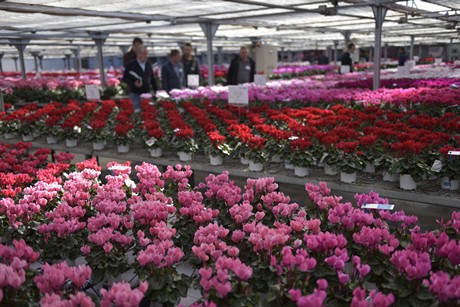 Morel Diffusion
The company is established in the south of France, Fréjus, and has been specialized in the breeding and seed production of cyclamen for almost 100 years. Everything, from research to production and harvesting is carried out in Fréjus. The reason for this is to have total control over quality during the entire process. The F1 hybrid seeds are produced in the subsidiary SCEA de MONTOUREY. The seeds are mainly supplied to Europe, but also to North/South America, Asia, Middle East, Australia and New Zealand.

The plants from Morel are characterized by their resistance to heat conditions during growing, tolerance against Botrytis, long shelf life at consumers’ and striking colors. At the moment they have 6 series; Smartiz®, Metis®, Tianis®, Premium, Latinia®, Halios®, which range from mini to maxi flower- and pot sizes.