“Customers like to have more varieties from one company so that they only have to deal with a few suppliers”, says Denis Kolpakov of Da!Rosa. This Russian grower of potted roses grows several Kordana varieties (a variety of German rose breeder Kordes Roses) and is expanding their range. Their ambition is to become Russia's largest producer and supplier

When talking about the Russian ornamental sector, Kolpakov explains that in the last five years, the quantity of the farms has increased and is now bigger than 10 years ago. Just like in other sectors, Russia wants to become more self-sufficient and therefore offers benefits to growers that are eager to expand. 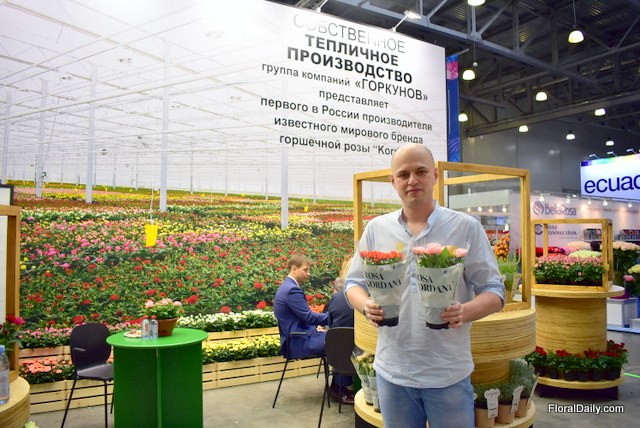 Denis Kolpakov of Da!Rosa presenting two of their 12 Kordana potted rose varieties. This Russian grower is broadening its assortment with imported flowers and is planning to increase their production as well. They will open two new greenhouses next season.

“When we started, just over a year ago, we produced 8 varieties of Kordana pot roses. Now we produce 12 and we are testing more varieties. Last year we exhibited with the pot roses at the Moscow FlowerExpo for the first time. Over the last year, we have had very positive reactions to these plants, particularly on the quality. Now we are testing the Kordana Grande. This variety is known for its large flowers and while testing them in our greenhouse, we discovered that the flowers of our Grande are even bigger than the regular ones.”

Expanding greenhouse
On top of that, Da!Rosa is going to expand. Their ambition is to become Russia's largest producer and supplier. They are currently building 2 new nurseries. “We try to explore the markets and start growing varieties that are easy to grow and high in demand. Next season, the greenhouses will open their doors.

However, even though there are benefits offered from the government to invest in expanding the greenhouse, it still is a challenge for a company to succeed, Kolpakov says. “Within Russia, it is still difficult to find good qualified and specialist staff. Therefore, in order to learn growing and achieve a good quality product, Dutch growers are invited at the farms to give advice.” On top of that, the devaluated ruble against the euro also makes importing greenhouse materials and licensees to grow a bit more expensive. But according to Kolpakov, they could avoid a price increase towards their customers.