Trials till November 10 in the Netherlands and from November 13-24 in France:

Everyone is looking for something new and special. Also for Morel Diffusion, "What are your special varieties?" is a more often heard question. Again this year, at their trials there was a good amount of interest in their special varieties and particularly the new Indiaka cyclamen caught the eye of many. According to Johan Huisman, Promotion and Development for the Netherlands at this French cyclamen breeding company, increasingly more growers and traders are looking for a niche product to add to their existing regular assortment. 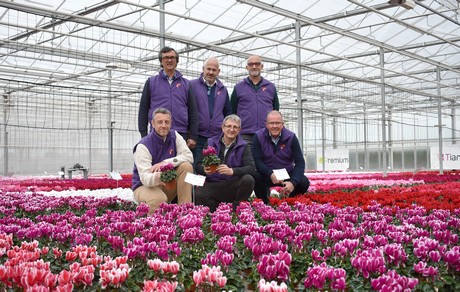 The team of Morel Diffusion at the Trial location in the Netherlands.

49,000 cyclamen
Every year, during this time, Morel organizes trials in the Netherlands and later this month in France. Last week, the Dutch trials took off on October 30 and a lovely colorful sea of 49,000 cyclamen attracted growers and traders from all over the world to their trial location Preesman Potplanten in 's-Gravendeel. "Every country has its own preferences, so the trials is a great opportunity to show what we have and what we are working on." The trials in the Netherlands will last till November 10 and the Trials in Fréjus, France, is set between 13-24 November. 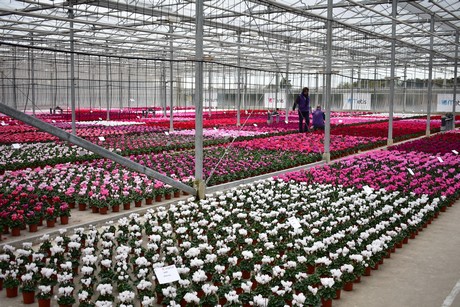 Existing and improved varieties
The set-up at the trial location ranges from small to large varieties and are divided in their six series; Smartiz (smallest), Metis, Tianis, Premium, Latinia and Halios (largest). Each series has its own characteristics, colors and lines. At the trials, the varieties that are currently in the catalogs are on display and are compared to their new varieties that are being trialed. This year, there are 15 new varieties on display. "As a breeder, you always want to improve the existing series. So, together with the opinion of the growers and traders, we decide to continue with a new variety or not." 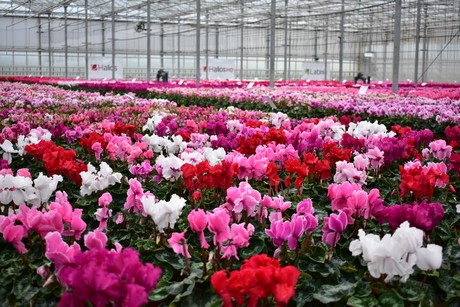 More special varieties
The bulk of the cyclamen presented at the trials are Morel's regular and the experimental improved varieties. However, the special varieties are catching the eye of many of the trial visitors and are therefore taking in more space each year. "The base still consists of the regular colors, but in order to make a display eye-catching, traders more often ask growers to put something special on the trolley", says Huisman. And in order to get the end consumer familiar with this 'special' variety, time is needed. "This special variety seems to be on display at least 15 to 20 weeks to really catch the attention of the end consumer and seduce them not only to buy this special one, but the existing regular colors as well."

Huisman receives requests for special varieties from growers increasingly more often and during the trials, they can show the growers and traders the specialties they have and the ones they are trialing. 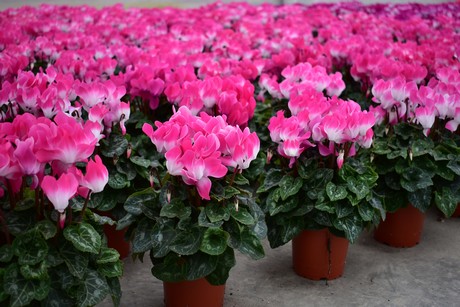 Indiaka - "The world upside down"
A variety that attracts the attention of many growers and traders is Indiaka. After 10 years of research and more than 3 years with different tests, it is now ready to put on the market. "It is the world upside down", says Huisman when referring to the bi-colored flower. "It has the color on top and white at the bottom, which creates this unique contrast." On top of that, the consumer can also put this variety outdoors. "It is an extra plus." 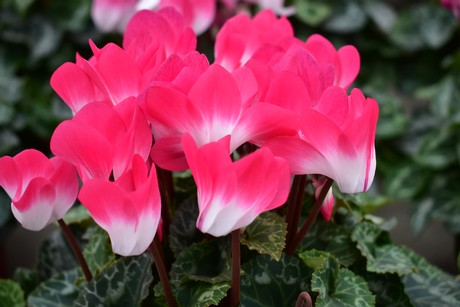 Together with their growers, Morel foresees a bright future for this variety. However, they do not want to over-flood the market with it. "Together with our growers, we decide if the number of plants that we put on the market meets the demand and if more or less plants are needed. Over the last year, as the demand is so high, we only decided to increase the number of plants and growers think the demand will continue to grow further." 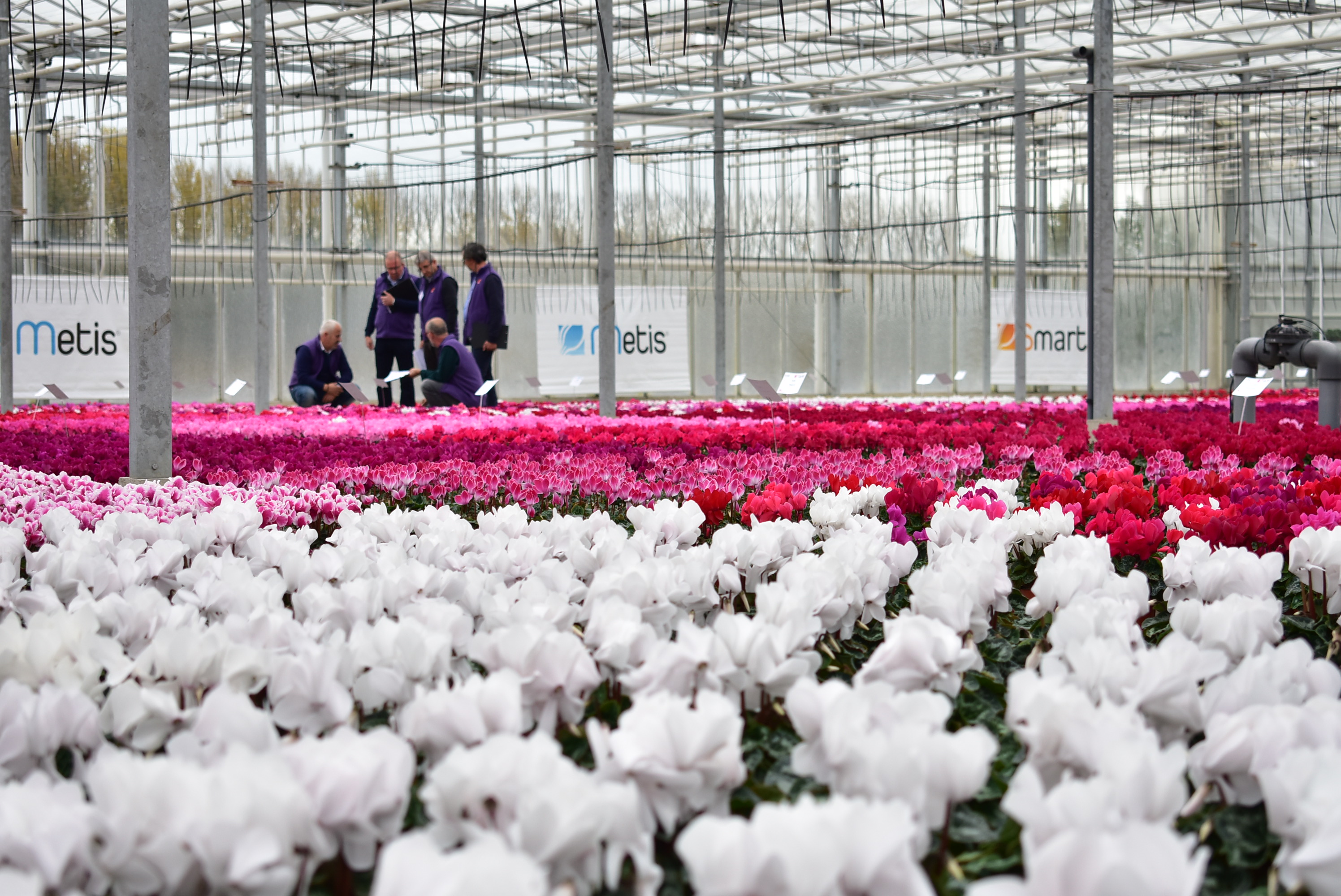 Morel Breeding team checking and comparing the new with the existing varieties.

The new big flowered red
Red is an important color for cyclamen - particularly for Christmas season - and is therefore great to produce year round. At the trials, they were showcasing two new and one experimental red varieties in their big flowers series Halios HD (compact range of Halios) and Halios. The two new red in this series are both named Red Rebelle. Special about this variety is, amongst others, the centralized 'bouquet' of flowers, strong stems and flower petals and less sensitive for burns.

Another red - that will do very well in the winter- is being tested and will probably be introduced next year. "Then, one can start with the HD red Rebelle in summer, Rebelle towards winter and this new one that is being trialed during winter."

A completely new series that is currently being trialed is Metalis. It has a thick silver edge on the foliage leaves. The series consists of 6 colors and they all have the same thick silver colored edge. 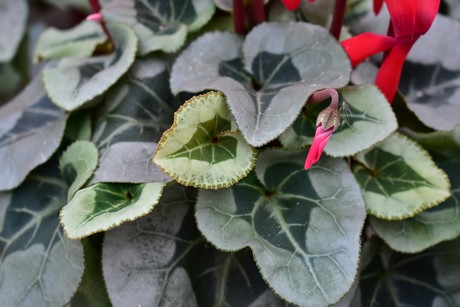 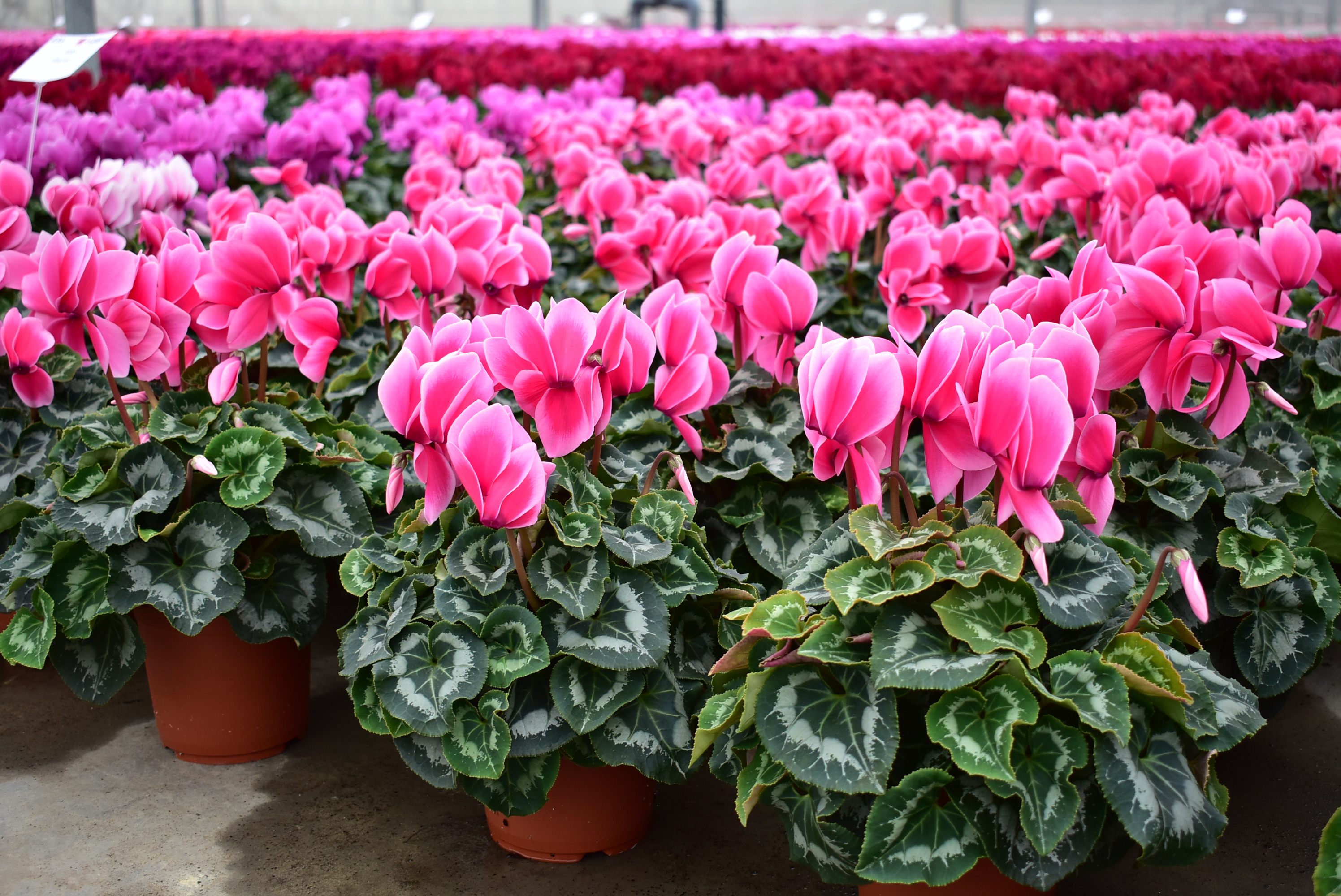 In the Halios series: Litchi Rose experimental. "This variety attracts the attention of many. The color is bright pink, like a Candy Cane." 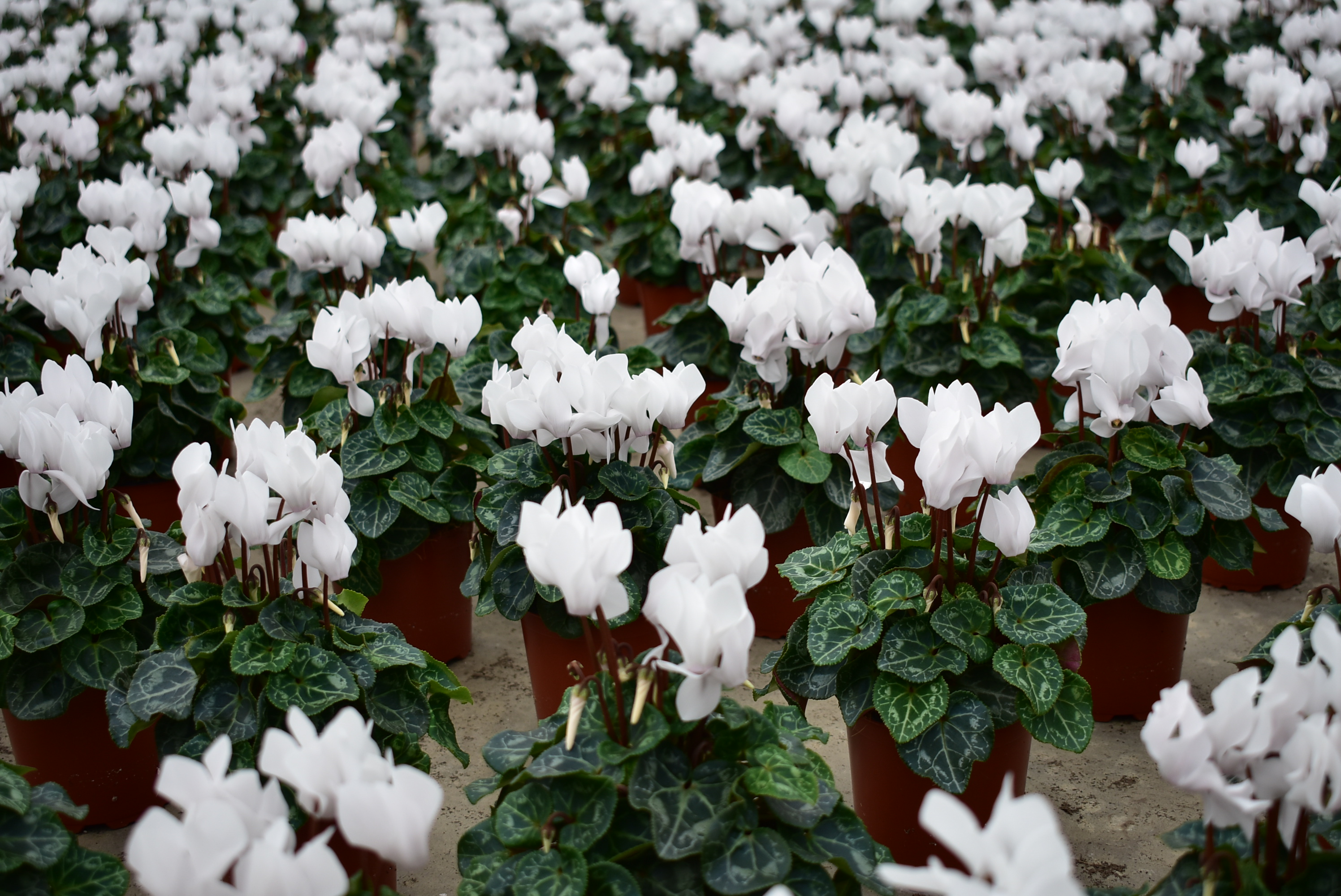 In the Metis series the Pure white. It is a scented cyclamen. 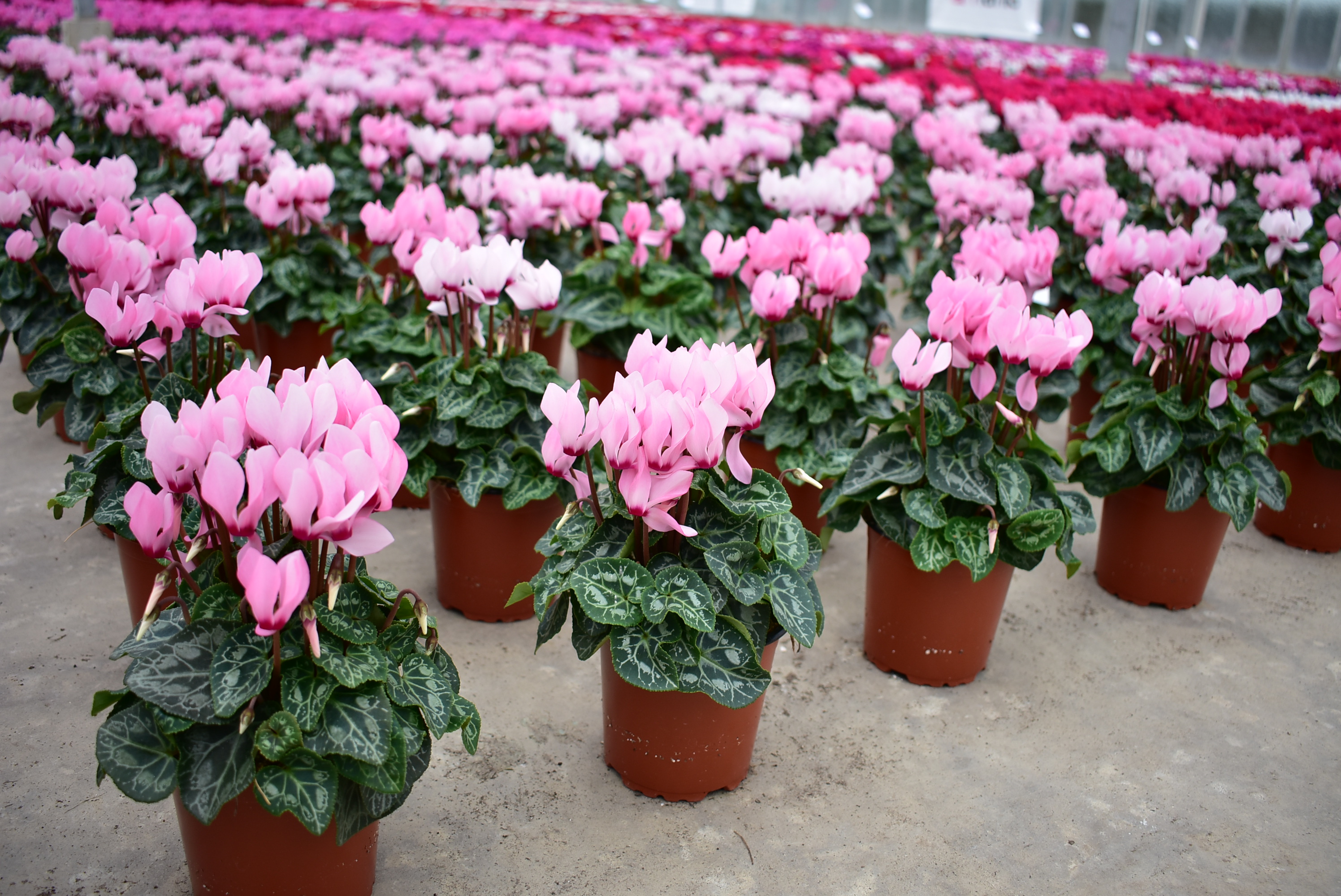 In the Metis series: Light pink with eye. This pink cyclamen has a dark pink center. 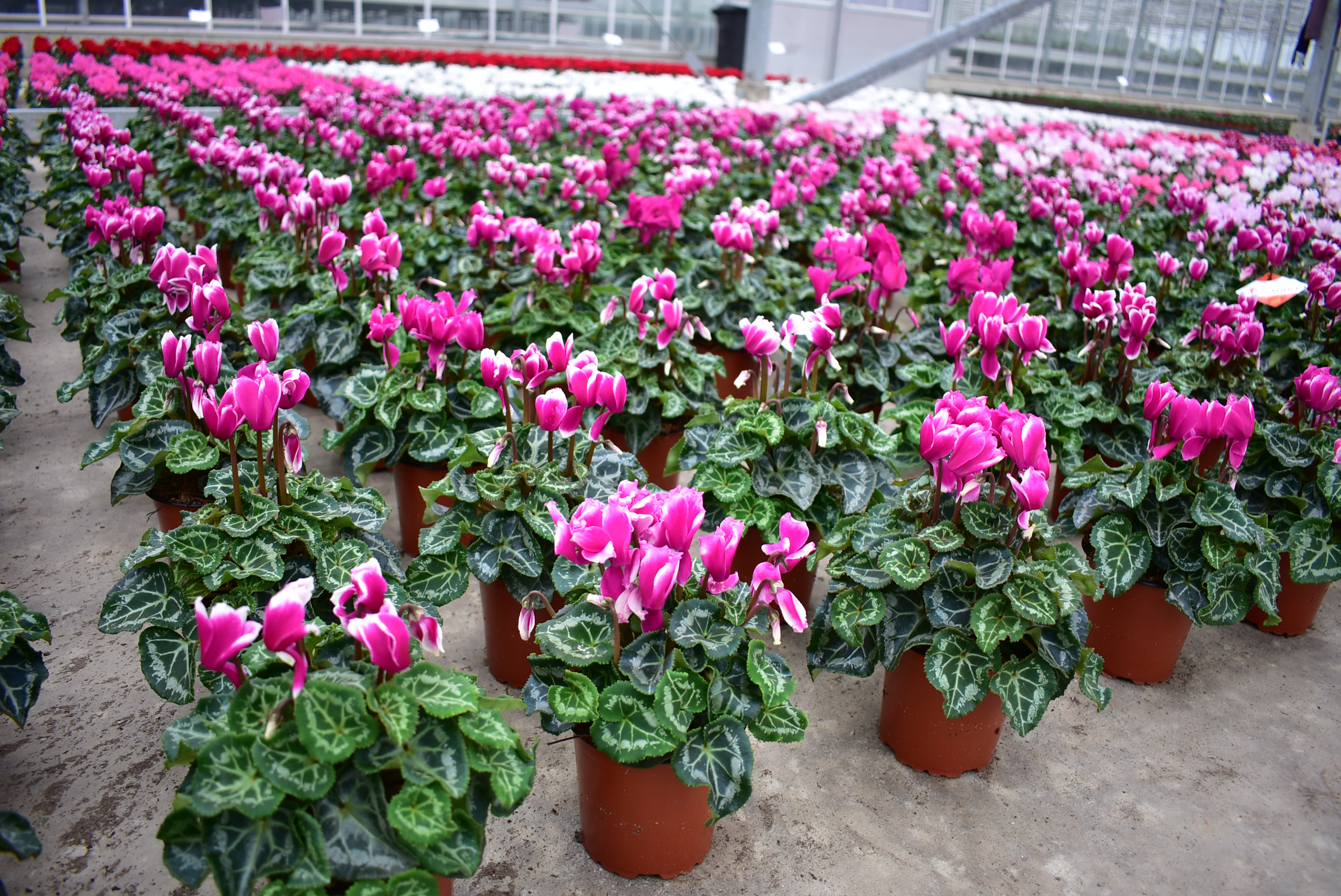 In the Metis series: Lilibelle Purple experiential. It is a combination of the Fantasia (the white edges) and Victoria (the crow). Together with the color Magenta, they are still trialing this variety. 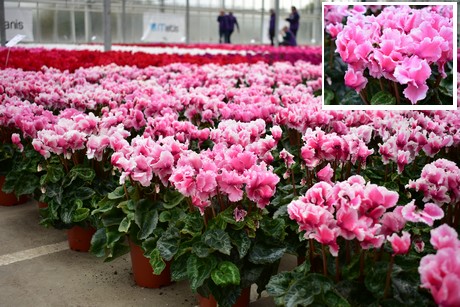 In the Premium series: Abanico Salmon, "a variety loved by florists." 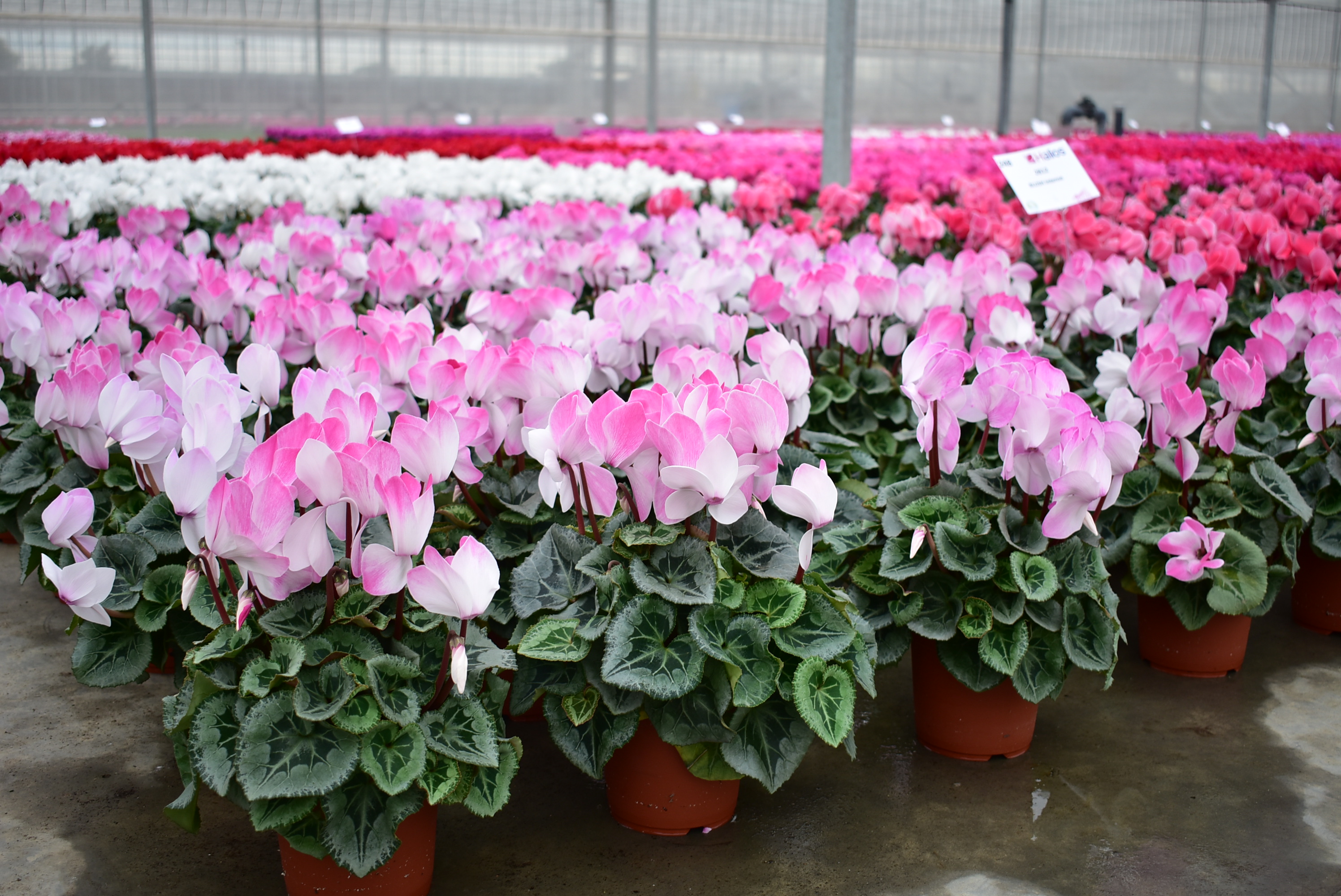 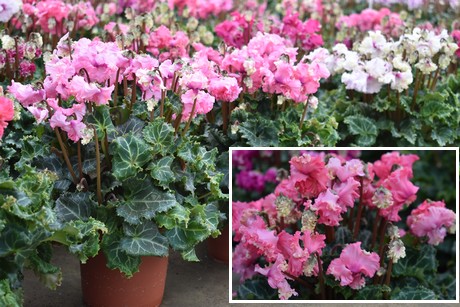 In the Halios series: Pipoca. It is a real niche product and the unique feature of this variety is that some of the buds retain an acid/yellow green colour that softens when the flower blooms. On top of that, the blooming flowers are long lasting. Next to a plant, the flowers can also be used as cut flowers.