Between October and November 2018, botrytis problems occurred in almost 10% of the Ecuadorian rose exports. But what was the reason for this problem? According to Gonzalo Luzuriaga of BellaRosa and RoseConnection, it was probably due to the significant increase in rainfall in November compared to 2017 and 2016. This is revealed by monitoring the rainfall in the Tabacundo area - something this Ecuadorian grower has been doing since 2003. So, when having more than 16 years of data in your hands, what catches the attention? 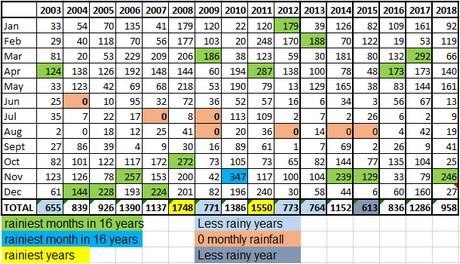 When looking back, Luzuriaga notices that November 2018 has been one of the rainiest November's over the tracking period. More rainfall was only seen in November 2006 and 2010 - which was the rainiest month of all the tracked years. In general, November can be characterized as a rainy month. In 16 years of follow-up, there are two marked peaks of precipitation, and these are in the months of November (with the highest rainfall data), closely followed by April.