"Save labor with Supernova liners"

The Supernova liners were developed more than 20 years ago in cooperation with researchers at Michigan State University to ensure that small container crops have consistent and faster flowering for market. To do this, Four Star treats regular sized liners with a treatment of intensive lighting, spacing to encourage growth, pinching, PGRs and heat — all of which help the liners flower faster and on time.

Bourdon explains, “These are not larger plugs with bigger soil volume. We don’t want that because you’d need more PGRs. This treatment is meant for Grande small containers, allowing each plant to have more branching and more flowers, in a much quicker time period.

Faster to market
“A standard sized liner typically would take 7 to 10 weeks to be ready to market in a 4-in. container,” he says. “And growers who don’t use PGRs on them would have to deal with the plants growing into each other.” 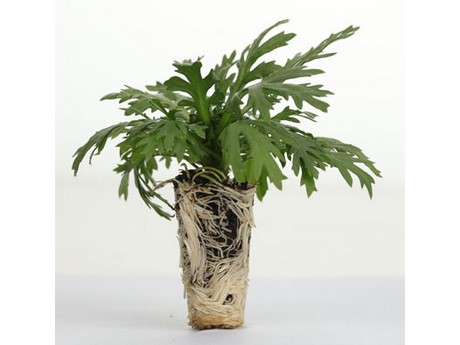 Like all Supernova Liners, the Golden Butterfly Argyranthemum plug shown here is a regular-sized liner that receives special treatment for faster flowering.

In contrast, Bourdon says the Supernovas are ready for market much more quickly. “They cost more initially, but the biggest payback is in time. The Supernovas take only 4 or 5 weeks to finish, and need no pinching or PGRs. Those labor expense savings more than offset the initial price.”

Because the crops finish more quickly, many growers also have been able to finish plants early and add an extra turn every season, which can be a considerable advantage, he adds.

More flowers, on time
Two of the main advantages of using Supernova liners is that they are faster to flower (saving production time) and they need less attention from workers (saving labor). Because these liners are pinched at Four Star, they do not need further pinching by the grower.  In fact, pinching is not recommended because it would remove the initiated buds.

The Supernova treatment is only used on those plants that can benefit from it, Bourdon says. “Some plants just don’t need it, so we don’t use it on them. Bacopa is a good example. They do just well alone as a 104 Liner in a Grande container. As we introduce new varieties, we determine which ones can benefit from the treatment.”

The difference in a Supernova treated vs. standard liner plant can be seen in comparative photographs like those shown here. Supernova treated liners have thicker branching and faster, more consistent flowering. This allows growers to have beautiful crops ready for market with every turn.

Supernova liners are offered as 52s, 50s and 28 Thrillers. The Supernova 52s are available in several popular varieties such as Angelonia, Calibrachoa, Petunia, Nemesia, Salvia, Verbena and others.  Supernova 50s are offered in Infinity New Guinea Impatiens and SunPatiens Impatiens. The 28 Thrillers are developed to support a larger, well-developed root system for larger containers.

Try the new Supernova 52s
When Four Star switched production from 84 to 104 Liners, it also changed from the production of Supernova 42s to Supernova 52s. “It was the same transition,” Bourdon says. “They have the same soil volume as the 104 Liner but are spaced every other plant in a tray to encourage more branching and flowers.”

Supernova 52 Liners like these Supertunia White Charm Petunia have the same soil volume as a 104 Liner but are spaced every other plant in the tray to encourage more branching and flowers.

Another advantage is savings on shipping. “This new system is nice because those growers who receive plants shipped to them now save 20% on their shipping costs and have fewer trays to handle on arrival,” he notes, because the Supernova 52 format provides more plants per tray and allow more plants to ship per box.

Growing Supernovas is easy
“I am often asked for my advice, and I would recommend growers make sure to maintain warmer temperatures in their greenhouses to finish Supernovas on time.  I recommend mid- to upper 60s to keep the flowers developing on schedule.  Otherwise, if it is too cool, they will grow more slowly.” 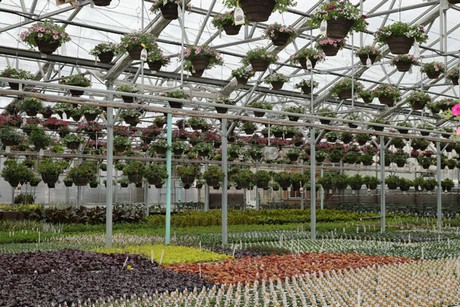 Grow Supernova Liners on in greenhouses heated from the mid- to upper 60s to finish on time, with full flowers and branching.

“With every order of Supernova liners, Four Star provides cultural information,” says Bourdon. “You can also find a lot of information about Supernova culture on our website.”