Lily: March Houseplant of the Month

The lily (Lilium) is a real feature in the home thanks to its beautifully coloured flowers that sometimes also have an exquisite fragrance. The potted lily is characterised by the long buds on the stem and the leaf that grows along the whole stem. The choice of colours with potted lilies is extensive: from red, yellow, orange and pink through to bi-coloured cultivars and pastel shades. 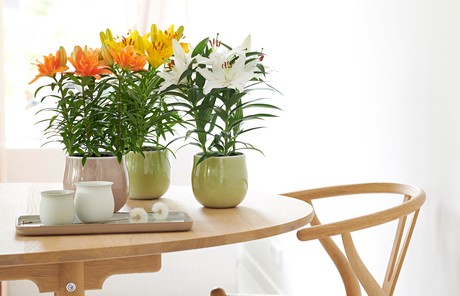 Origin
The lily is a herbaceous plant which is part of the lily family. The plant grows from a bulb and consists of more than a hundred species, of which most can be found in the northern hemisphere. The original plant probably came from China - the plant still grows in Korea, Japan and parts of Siberia - and spread via the Caucasus, the Balkans and the Alps to Europe, and later America. In the wild, lilies usually grow in a woodland setting or on grasslands.

Potted lily range
The range of potted lilies is growing. Well known varieties come from the Asiatic Group, often with brightly coloured flowers, and from the Oriental Group, with large flowers with a strong scent. In addition, there are double-flowered lilies in pink and white, without pollen and with a light sweet fragrance. There are also compact varieties in pink or white with round leaves and a light fragrance.