“We want to turn waste into a supply”

A lot of flowers in Toscana are being produced on peat but in the future they may be skipping the peat for dredge remediated sediments from the port of Livorno. At least that is the aim for the project SubSed that Flora Toscana is working on with the support of the LIFE program of the European Union. “We want to demonstrate that it is possible to convert a waste into a supply”, says Maria Castellani, responsible for the project on behalf of the coordinator Flora Toscana. 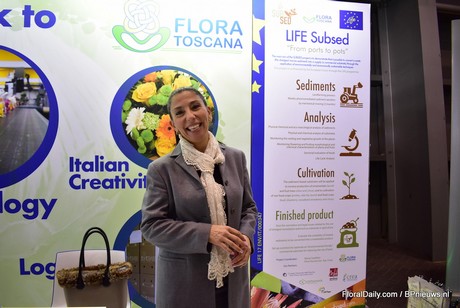 Maria Castellani of Flora Toscana at the IPM Essen 2019. The project started off in October with a kick-off meeting with all the beneficiaries at the headquarters of Flora Toscana in Pescia. They have since visited several places in Europe to talk about their ambition, one of which is Essen for the IPM.

How to grow on waste? “Due to the application of environmentally and economically sustainable techniques we convert the dredged marine sediment into a commercial substrate, which then can be applied to nursery production of ornamentals like laurel and fruit trees like olive and citrus. It also will be usable for cultivation of protea, calla lily and food crops like basil, blueberry, woodland strawberry and citrus.” 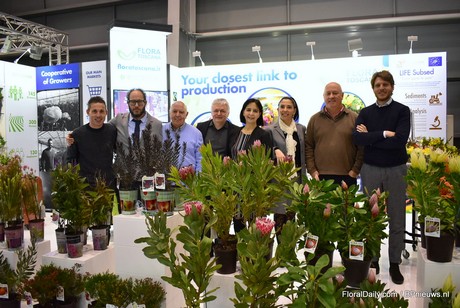 The team of Flora Toscana at the IPM Essen 2019.

The performance of the new substrate will be demonstrated at farm scale in Italy and Spain by comparison with the typical production of the same crop cultivated on a peat-based commercial substrate. “During this test phase we take a close look at monitoring the rooting, the vegetative growth, the flowering and the fruiting of the plants. Next to extensive testing we also have to figure out the legal issues on sediment re-use, preparation and packing. After several pre-commercial we will start distribution to nurseries and growers”, says Castellani.