Mexico is often named as one of those countries having a huge untapped potential for high-tech floriculture production. Climate, availability of all possible resources, infrastructure, huge markets around the corner, all is at hand. It is, therefore, as if the market is waiting for something to get the ball rolling. Hoping to initiate this floriculture boom, the first major floriculture business fair in the country, the Ornamental Plants & Flowers México powered by IPM Essen, will be organized in the Centro Citibinamex exhibition center, Mexico City, September 18-20.

This fair will be organised in close cooperation with Messe Essen, and what better moment to present this new initiative than at the IPM ESSEN itself? Back in January we were lucky to meet with initiators Torben Brinkman of Messe Essen and Enrique Arias Velazco of Ornamental Plants & Flowers (OPF) Mexico. 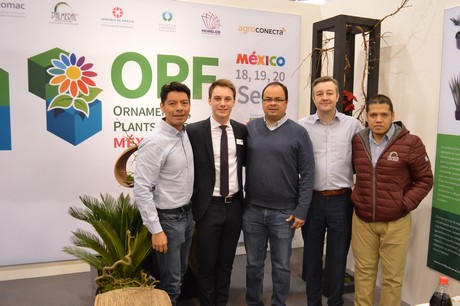 With over 23,000 hectares of floriculture production, quite a large business is already in place. In Mexico one can find almost every existing climate zones. The country hosts a huge biodiversity, (young) labour is abundantly present, roads and infrastructural hubs are in place, and space is abundantly available. However, the market is not on the international industry’s mind, and vice versa Mexican floral producers hardly present themselves abroad. At the IPM ESSEN, for example, only three Mexican parties were present. Today, the fruits & flowers of large scale domestic production of both vegetable and floriculture crops is largely destined for the local market.

“Based on these findings we believe Mexico is ready for an international horticulture business fair”, Torben says. “Local producers are eager to benefit from knowledge and supplies of major international players within the greenhouse industry, while the market itself is offering commercial opportunities. Especially in terms of potted plants the Mexican market has huge possibilities. Cut flowers are produced in Colombia and Ecuador, but (finished) plants on the North-American market are either home grown or not grown at all.”

“Besides, this trade would offer new perspectives for restoring the troubled trade relations with the US” Arias Velazco adds. “Apart from a new largely barrier-free trade relation with the European Union, the timing is especially fit with an eye to the recent signing of the new trade deal USMCA  - the United States-Mexico-Canada Agreement. This deal replaces NAFTA, a similar deal but with some restraints now aborted. For example, for Mexican producers it should now be easier to ship out goods to the North America.”

Lastly, everyone interested should definitely seize the opportunity to come, for simultaneously it offers a great opportunity to be introduced to the local market as well. According to Arias, no less than 70 percent of the floricultural production is located within two to three hours driving from the City.

After China, Russia and the United Arab Emirates, the IPM in Mexico will be the organisation’s fourth offshoot. At the fair, four different sub sectors will be represented: flowers and plants, (greenhouse) technology, floristry and decorations, and garden & landscaping.