Hillier Nurseries has recently completed a major redevelopment of the Despatch facility at the company’s nursery site in Hampshire. A significant extension to the existing building, plus changes to the whole despatch process, have streamlined work and allowed for better quality control. These modifications will help achieve a faster delivery and turnaround time for customers. 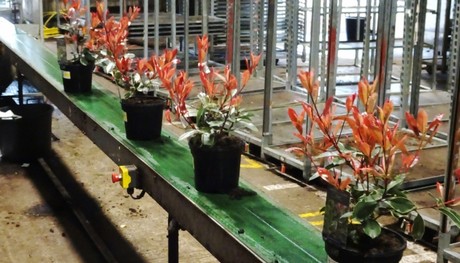 Work concluded on the redevelopment of the whole Nurseries Despatch facility in mid-February 2019, with the project taking several weeks. The improvements include a 325 m2 extension to the building, bringing the total facility size to 1850 m2. The larger structure allows for increased capacity of people and plants. At the same time, the whole despatch process has been changed to make it more effective, with improvements to accuracy and quality control.

As part of the development, modern LED lighting units have been installed throughout the facility, replacing the old high-pressure sodium lights. The LED lights will improve the working environment for the Despatch team, giving an additional 66% of light. They will also reduce electricity consumption by 75%, which ties to the company’s ongoing commitment to the environment. Within the facility, the conveyors have been extended. By making them longer, with better lighting, workflow has been improved and the line made more efficient.

Charles Carr, Head of Wholesale Nurseries, commented. “We despatch 1.5 million quality shrubs and perennials annually to a range of garden centres throughout the UK, so these improvements to our Despatch facility should make a real difference for our customers. With the bumper early spring weather, meaning a number of late nights for our production team, it has been fantastic that this updated facility has already come to the fore.”