Danziger rolls out the red carpet for CAST 2019

Elvis was in the building at the Danziger CAST display in Gilroy, CA on Saturday. The surprise visit by the King of Rock and Roll kicked off the start of the Spring Trials event, highlighting the newest variety in the unique petunia series, Amore King of Hearts. Danziger’s North American team enlisted the King’s help as a surprise to customers and company executives. The night was filled with flowers and fun, including pictures on the red carpet, songs and dancing. 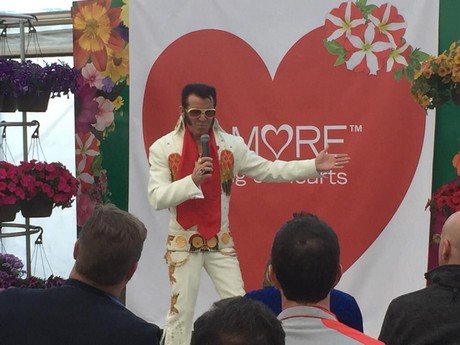 The event was a unique way to introduce a unique petunia series. The blooms of Amore Petunias each feature five distinct heart shapes, outlined in bright hues. For 2020, the series expands, adding three new varieties including King of Hearts, Fluttering Heart and Pink.

Amore fits well with any petunia program. The Amore series is well matched in flowering response. Quarts and 6-inch pots will finish in 13 weeks from stick. 10-inch and 12-inch containers with three or four plants per pot will also finish in 13 weeks from a URC. This series can also be finished for early season sales under high light conditions.

Amore is recommended for quarts, hanging baskets and unique combos.