The Geothermal Development Company (GDC) posted Sh 2.1 billion [20.8 million USD] profit before tax for the Financial Year 2017/18. This is a sharp increase from Sh 896 million posted the previous year. 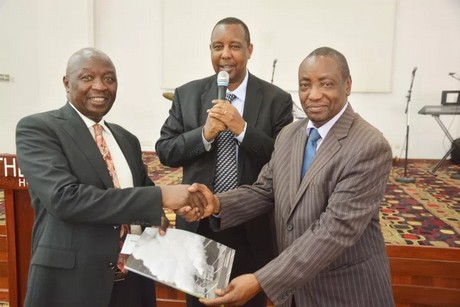 The increase in profits is attributed to a boost in steam sales from our geothermal wells in Olkaria. The steam is sold to KenGen for electricity generation.

GDC made the announcement on Friday March 22, 2019 during the Company’s Annual General Meeting (AGM).

“The increased revenues are an indication that we are stable and that the fortunes of the company are getting better,” said Eng. Johnson P. Ole Nchoe, the GDC Managing Director and CEO. 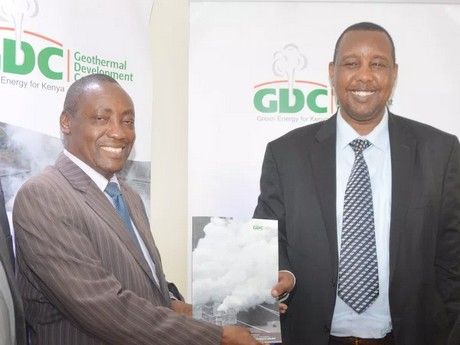 Mr Gershom Otachi Bw’Omanwa (left) the Chairman, GDC Board of Directors receives a copy of the GDC Financial Report for the year 2017-2018 from the company’s Managing Director and CEO Eng. Johnson P. Ole Nchoe. GDC has started to make profits mainly from steam-sales to KenGen

The PS noted that a huge chunk of Kenya’s geothermal potential is yet to be explored. Kenya, Eng. Njoroge noted, is only exploiting 600 MW of geothermal out of a potential of 10,000 MW.

“Geothermal is our base-load. It‘s the key enabler for the Big4 agenda and Vision 2030. It’s only with affordable and reliable electricity, such as geothermal, that we can become an industrialised mid-income nation,” the PS explained.