Over the last week, we’ve kept you up to date with pictures and info on the California Spring Trials. Now, it is almost time to publish the full photo report, including more information on the products on display. Curious what it will look like? Below a preview of the photo report that will be published on Monday April 1.

Later on, in separate articles, we will publish even more pictures and information on the varieties that were on display. 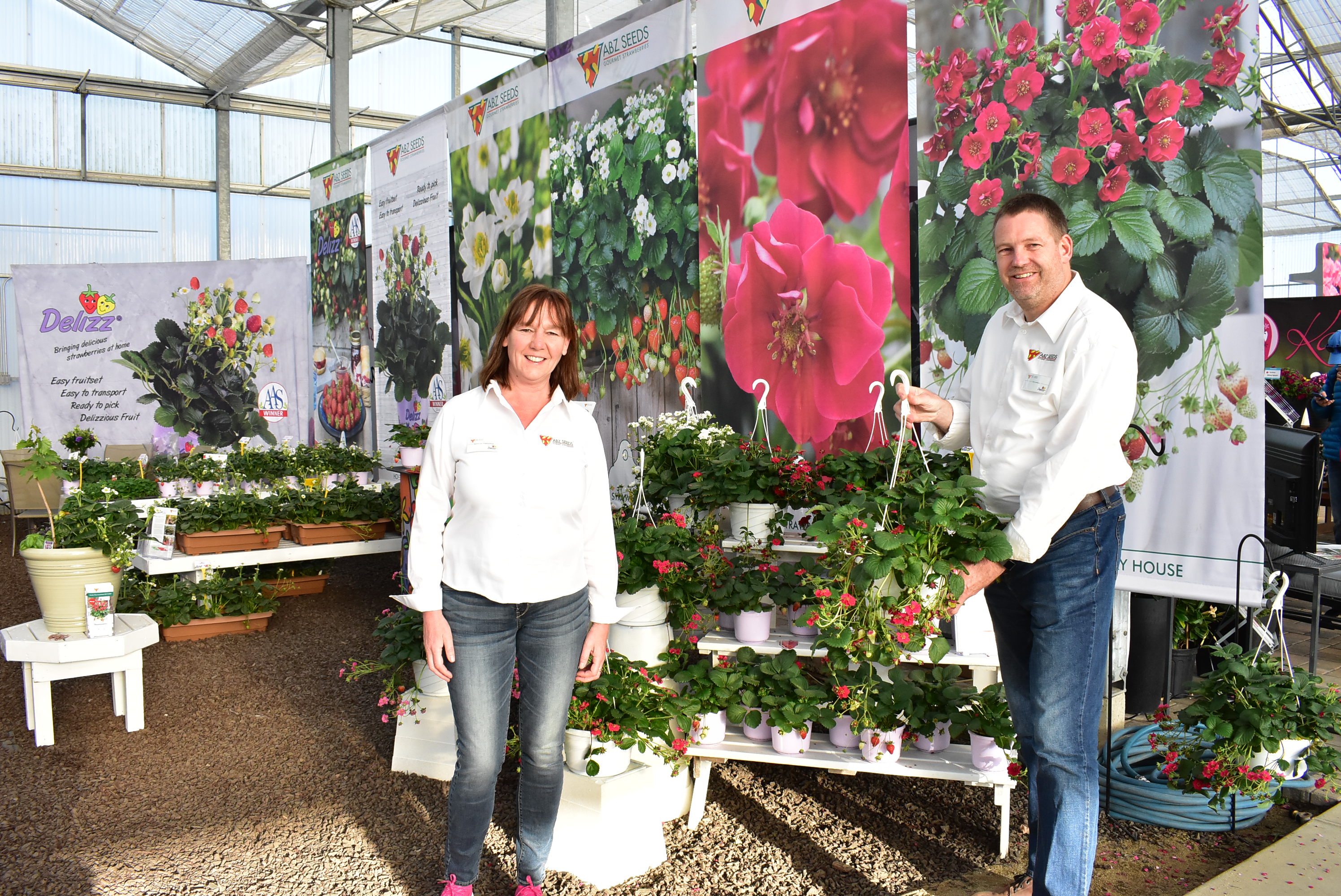 Jorien van Engelenburg and Eric Juckers of ABZ Seeds presenting the Summer Breeze rose. It was introduced last year and will be on the market this year. It is one of the double flowered strawberry varieties. It has a deep pink color and a lot of flowers", explains Juckers. On top of that, the flower stems are sturdy and are standing above the plant; it is a real ornamental edible and the demand so far is good.” 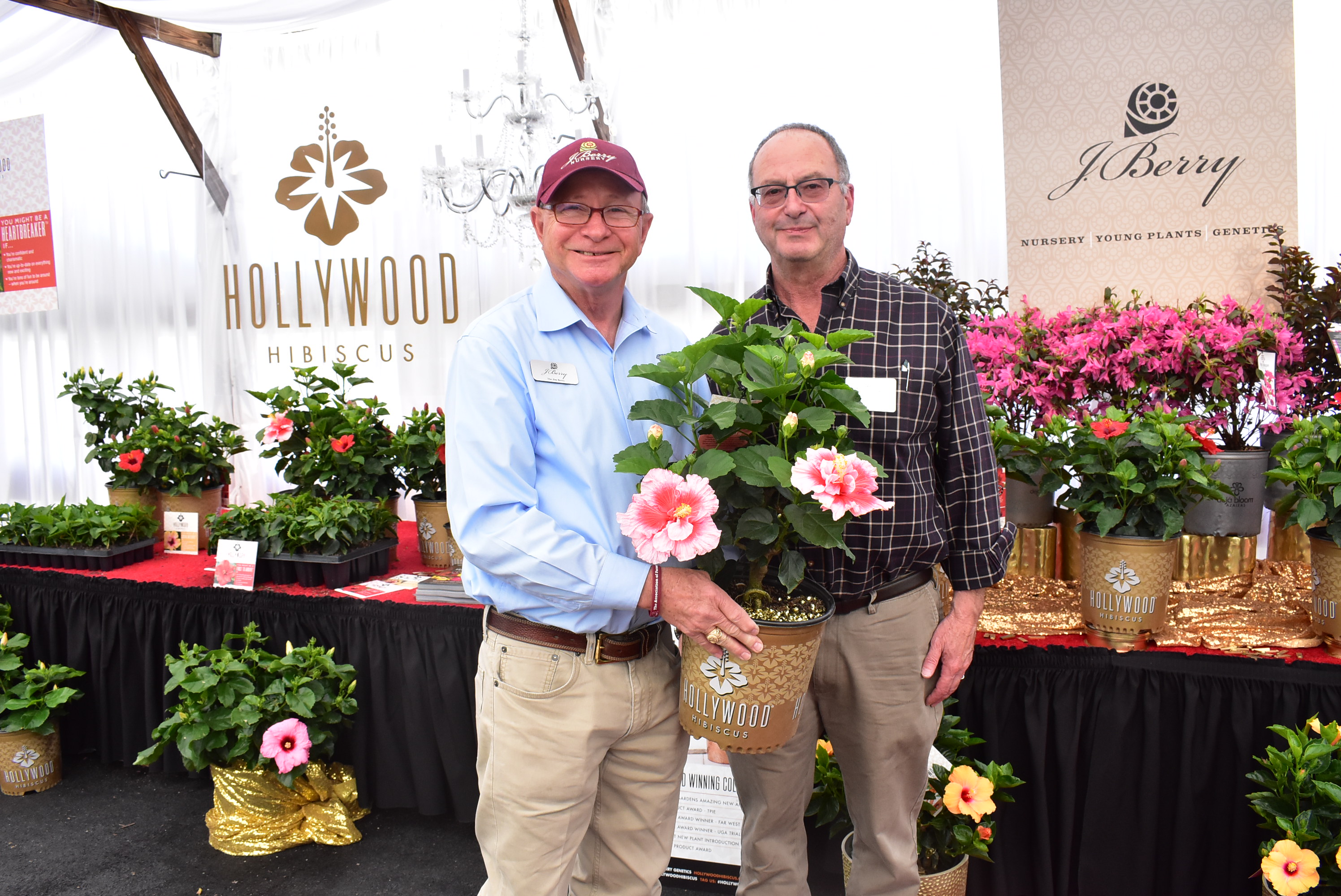 Jim Berry of J. Berry with Mitch McDonald of Botany Lane Greenhouses, one of their largest young plant producers. They are presenting Hollywood hibiscus Runaway Beauty. This new variety that is added to the Hollywood collection has large bi-colored pink and almost semi double flowers. Funny to tell is that you can do a personality quiz on hollywoodhibiscus.com. It will show you what character suits you in your landscape best. 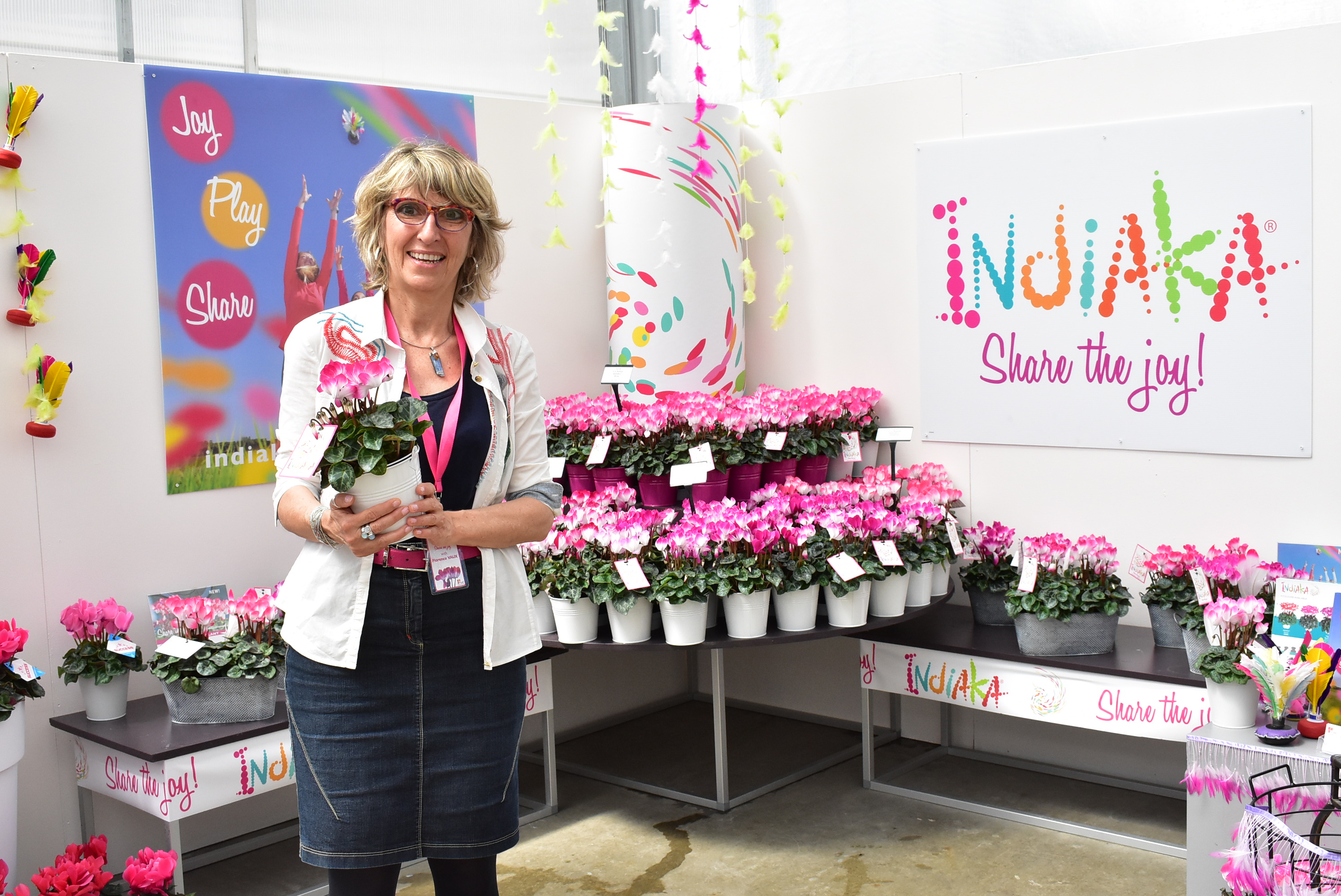 Florence Vaux of Morel presenting Indiaka, a new bi-colored cyclamen series. The series has more heat resistance with an intense coloring. “The contrast between the petals’ white base and its vibrant color at the tip of the flower makes a stunning show.” Also nice to mention is that this French breeding company is celebrating its 100th anniversary this year and that they received the MPS certificate A+ at the end of 2018. 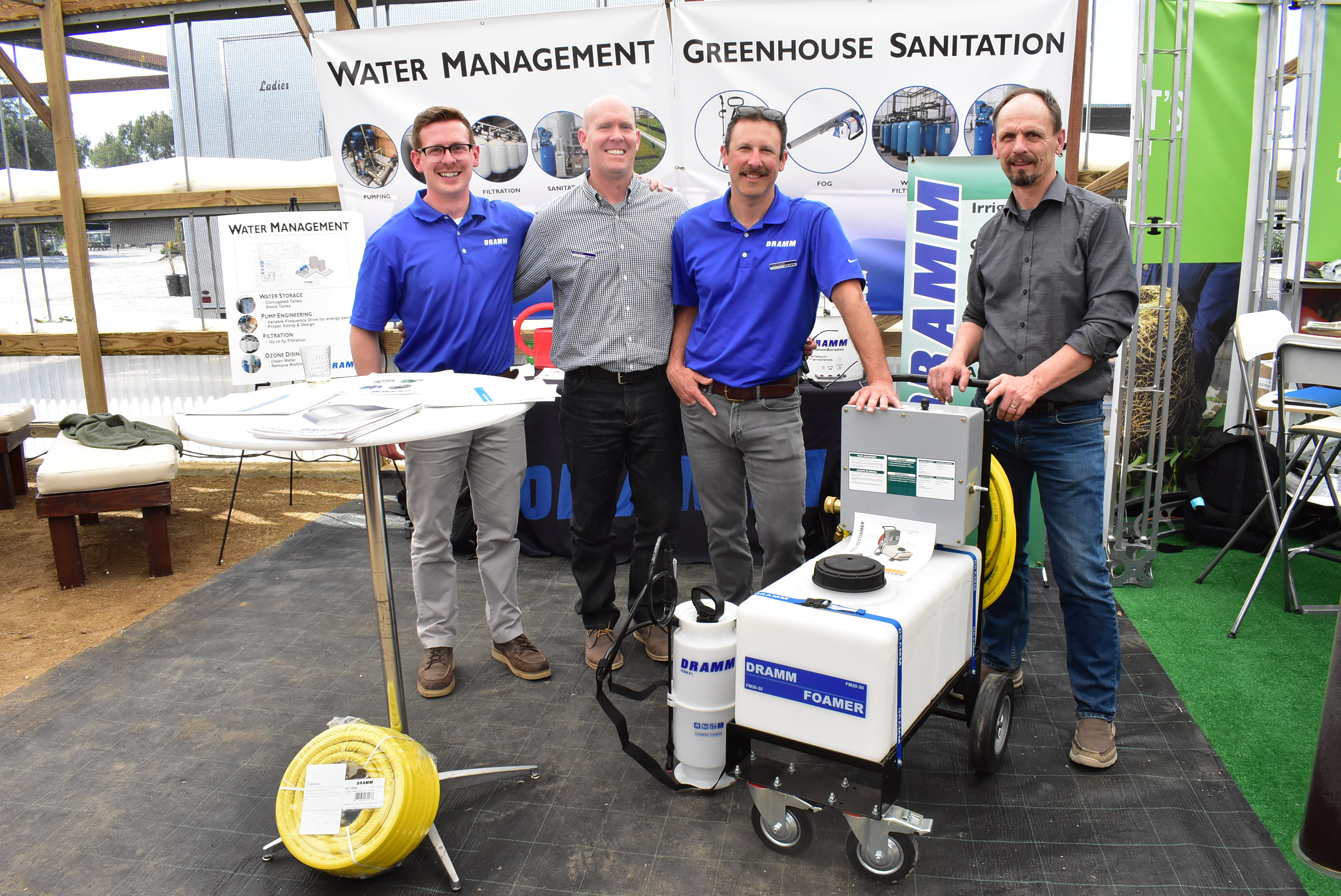 Besides new varieties also other solutions were on display. At Dramm, for example, the team (from left to right: Tim Reusch, Les Evans, Hared Babik and Louis Dramm) presented their water management and sanitation solutions. On the picture two sanitizers; a smaller and larger one. It will work with any sanitizer and foaming agent. “The difference between this product and others is that we put pressure on it. Often much air is added and then, the foam does not hold well. Now, it holds better.” 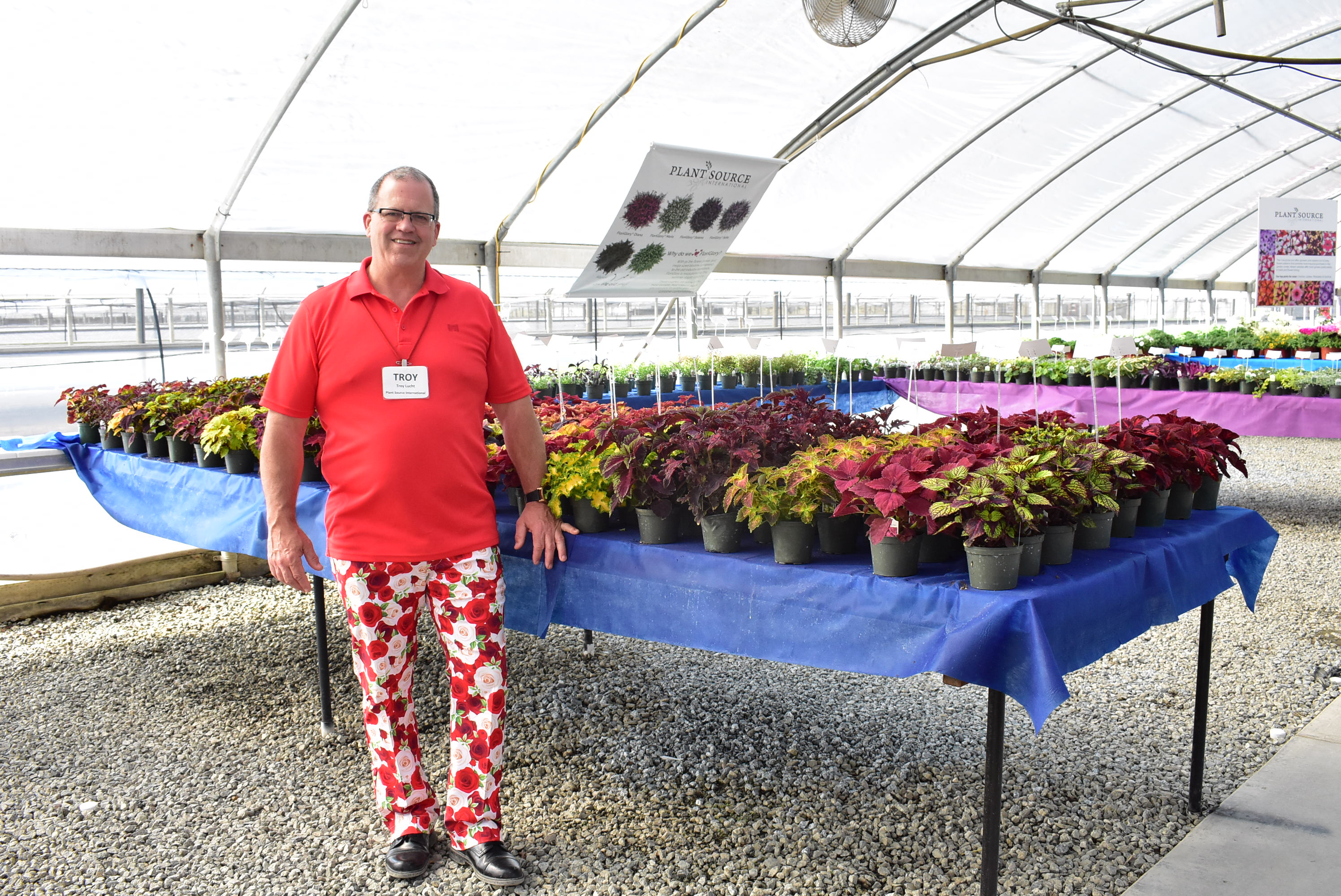 Troy Lucht of Plant Source International in front of the Heuchera varieties they grow. They grow unrooted cuttings for the North American market and have production sites in Mexico and in the U.S. This year, they will add the Suntory breeder line to their list.