An older celosia variety – New Look – has been named the latest Texas Superstar release based on its superior performance across the state, according to a Texas A&M AgriLife Research expert. 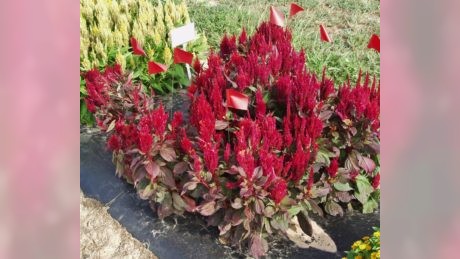 New Look celosia was a hit among visitors at the annual East Texas Horticultural Field Day in Overton, as indicated by the flags placed by attendees. (Texas A&M AgriLife Research photo by Dr. Brent Pemberton)

To be designated a Texas Superstar, a plant must not only be beautiful but perform well for consumers and growers throughout the state. Texas Superstars must be easy to propagate, which should ensure the plants are not only widely available but also reasonably priced, said Dr. Brent Pemberton, Texas Superstar executive board member and AgriLife Research ornamental horticulturist, Overton.

New Look celosia is a warm-season annual with bright red plumes that soar above the dark, bronze foliage, Pemberton said. Plumed flowering types are also commonly called “feathered amaranth” or “feather celosia” due to their characteristics.

“The contrast in the red and the bronze foliage is an eye-catcher,” he said. “It just has an exotic look that blends well with any landscape.”

Flowers are very long lasting and continually produce throughout the summer season up until the first frost, Pemberton said. The plant and its flowers tolerate light shade and dry conditions when established and will stand up to a Texas summer much better than other celosias of this type.

“This variety has been reliably tough in high temperatures,” he said. “It can take whatever the Texas summer throws at it.”

New Look celosia can be used for bedding, in containers and as a cut flower, Pemberton said. It has been on the market for many years and stood the test of time in trial gardens across the state.

Return flowering can be enhanced by removing old flowers just below the bloom, Pemberton said.

Pemberton said buyers should make sure and look for the name New Look Celosia because similarly named plants are being marketed.

“We have tested a lot of celosia over the years and this one continues to be the best,” he said. “It’s been around a long time, but sometimes you just have a plant in the garden year after year and might take it for granted. Then it catches your attention and you’re like, ‘dang, that is a good plant.’”

More information about other Texas Superstar plants and a list of wholesalers and retailers who stock them can be found at http://texassuperstar.com/.