What was on display at Ball Horticultural during CAST?

New, existing and improved varieties. They were all on display at the California Spring Trials, that took place from April 14-19. Also at Ball Horticultural Company in Santa Paula many varieties were on display. In this article, we will highlight the novelties of Kieft Seed, PanAmerican Seed, Darwin Perennials, Ball FloraPlant, Selecta One, Burpee, Ball Ingenuity, Morel Diffusion and Star Roses and Plants. 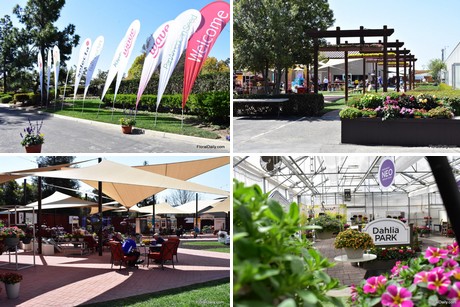 Some shots of the Ball Horticultural site in Santa Paula. Varieties were showcased indoors and outdoors. 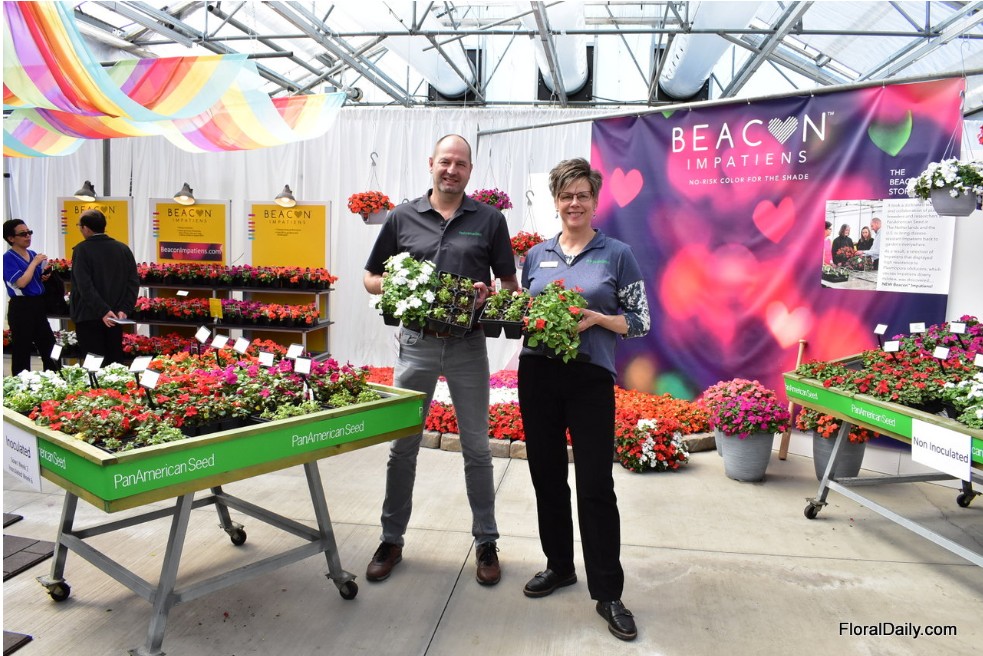 Ruud Brinkkemper and Lisa Lacy with PanAmerican Seed presenting their new Impatiens Downy Mildew resistant series Beacon. In the photo, they are comparing it with Super Elfin XP. Its plant structure, flowering time, flower size and crop culture is similar to Super Elfin, however Beacon impatiens exhibit high resistance to the currently known and widely prevalent populations of Plasmopara obducensm which cause impatients downy mildew.” 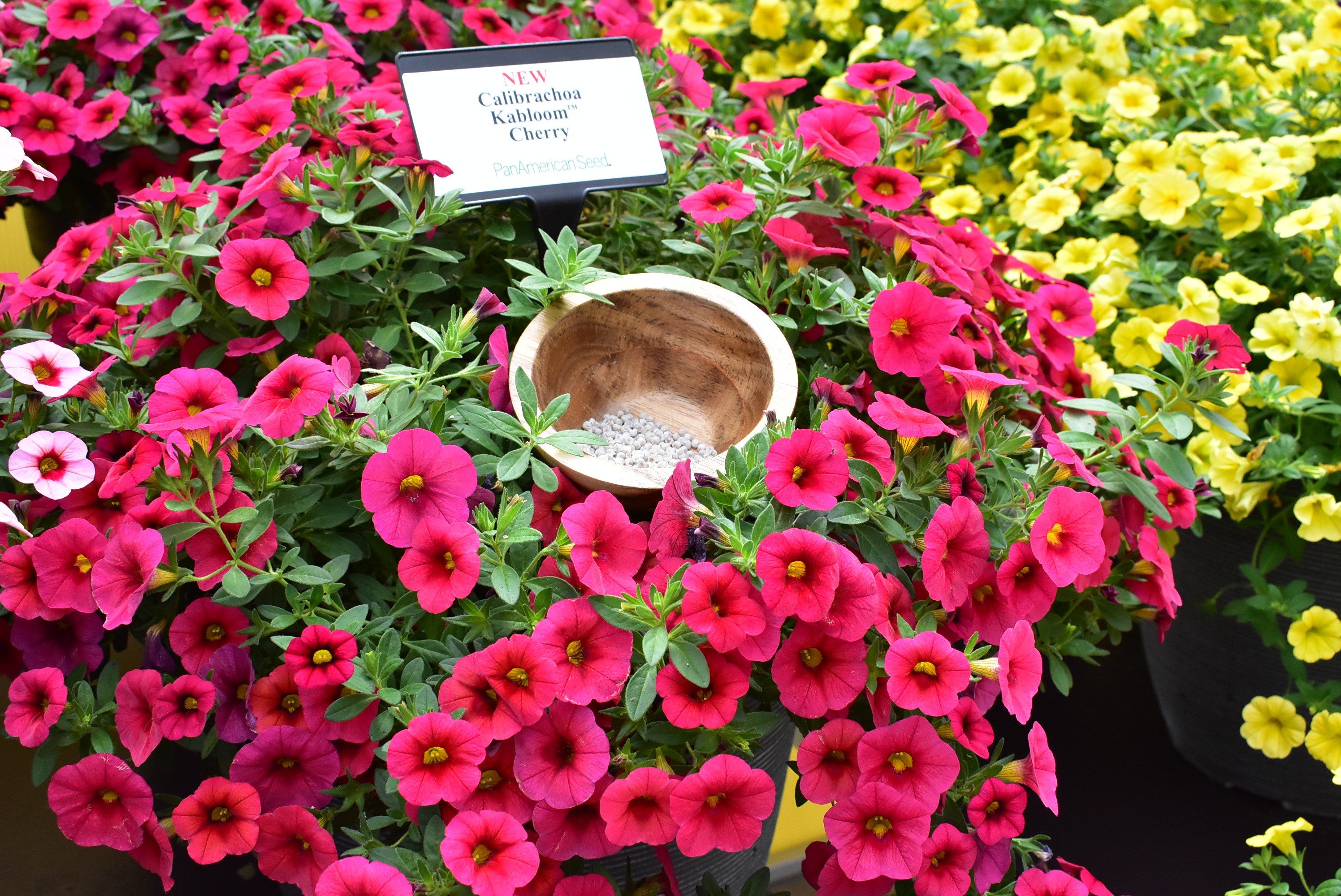 Calibrachoa Kabloom Cherry is one of the 6 new (and 1 improved) varieties added to the Kabloom series, which is characterized by its bushy trailing habit with bright blooms in solid colors. All varieties in the series are offered in their Precision Multi-Pellets. "Ideal for grower choice premium quarts as well as 4 to 6 inch / 10 to 15 cm pots, hanging baskets and mixed combos." 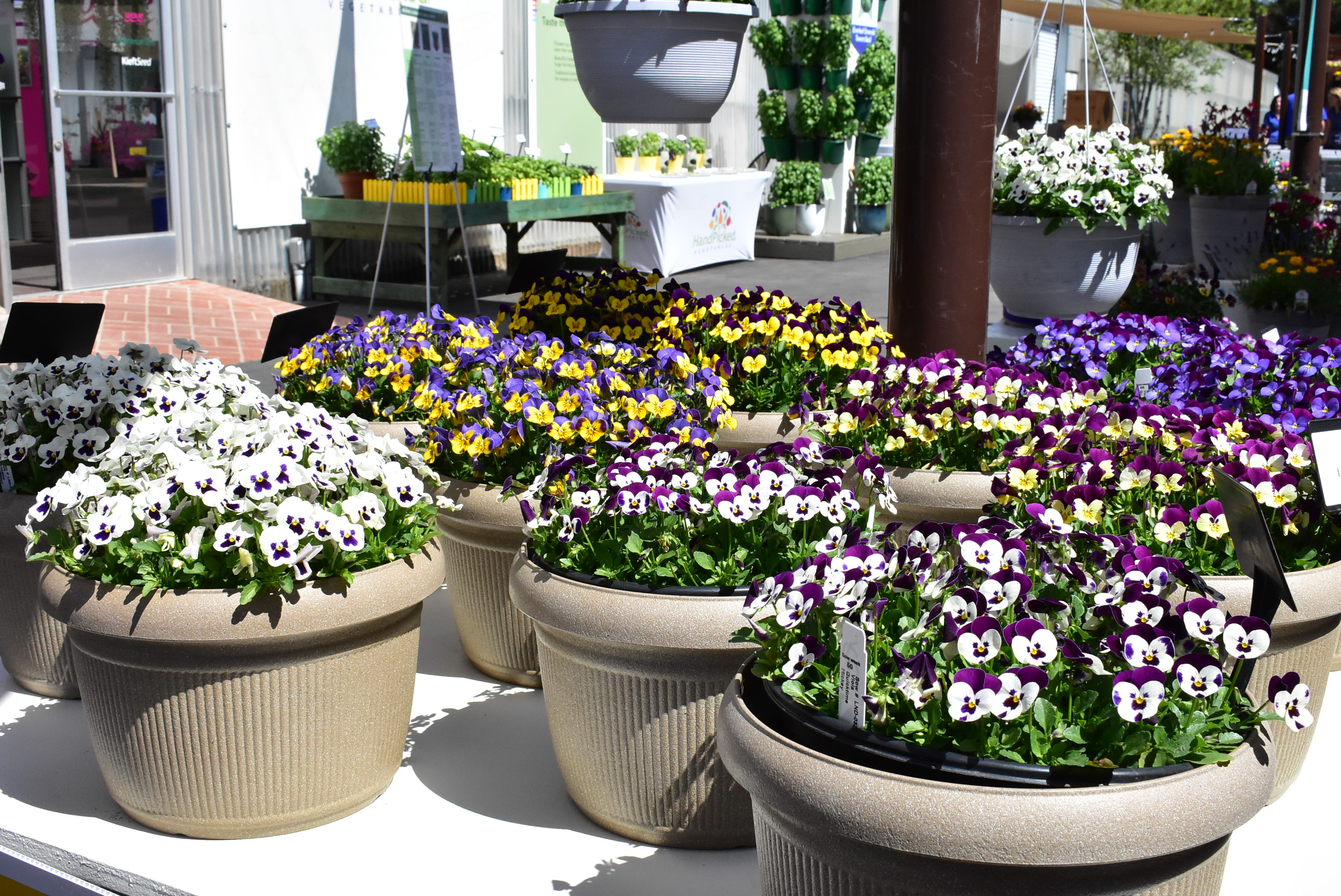 Quicktime F1 Viola is a new early-blooming, almost day-neutral, and free-flowering viola series. "Almost day neutral and free-flowering selection criteria make Quicktime Viola the best option for cold-grown, overwinter-produced viola crops." The series currently consists of 6 varieties and the time from transplant to finish is 5-6 weeks in spring and 3-4 weeks in fall. 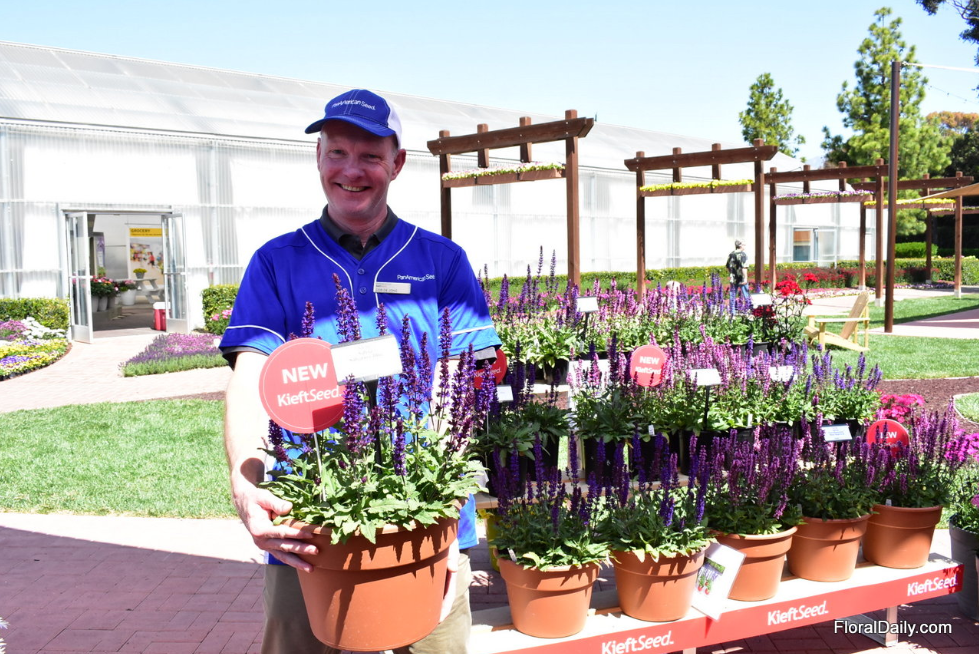 Cor de Jong of Kieft Seeds presenting Salvia Salvatore Blue. It is claimed that this salvia features the largest spikes and the deepest colored calyx, spikes and flower in Salvia nemorosa from seed. "It is more vigorous than New Dimension Blue, so it is better suited for gallons." 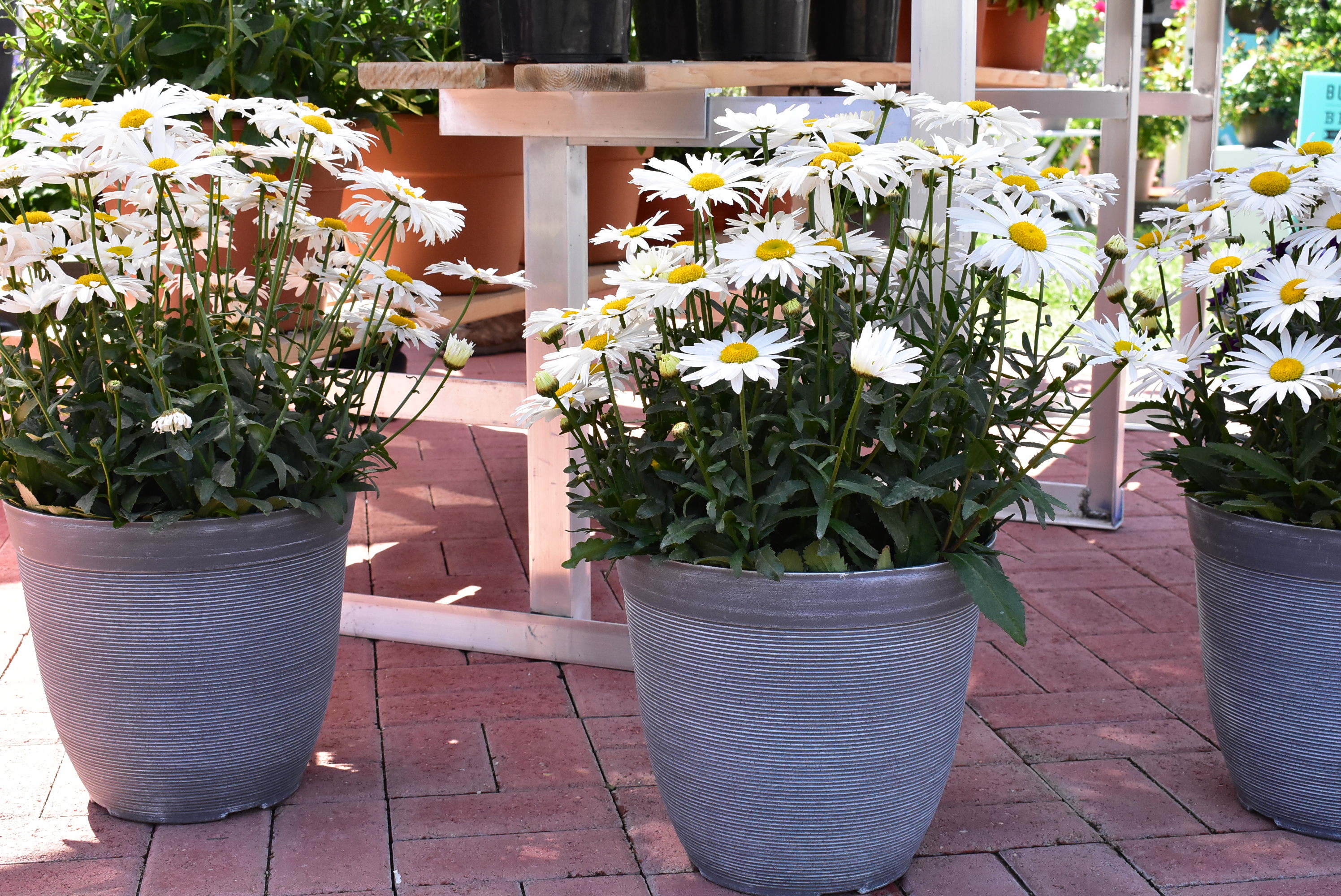 Leucanthemum Madonna is a new Leucanthemum that claims to offer better uniformity in height and habit over the competition. On top of that, it is said to be an alternative to vegetative varieties as it does not require vernalization and has no risk of bacterial infection. “It also offers a reduced percentage of 'too small' plants compared to standard varieties and up to 15% of the petals may have laced-edge petals for a unique look." 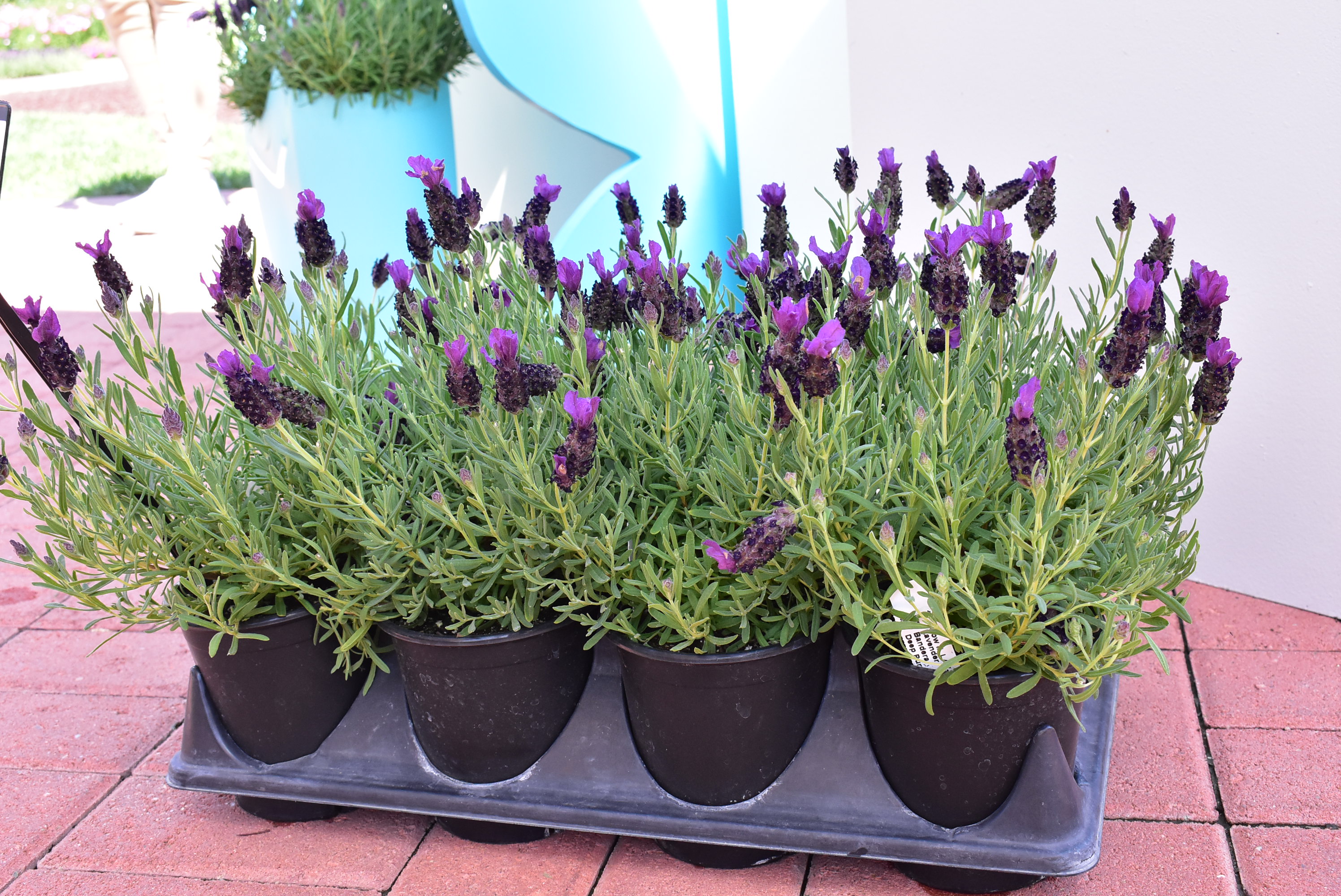 According to Kieft Seed, Lavendula Bandera Deep Purple is a true breeding breakthrough. "The first professional-quality seed L. stoechas series produces quality comparable to vegetative varieties. It has a compact to medium habit with good branching, is uniform, flowers heavily and long, is self cleaning, holds dense, mounded habit in the garden and has a good secondary flush of flowers. On top of that, it flowers 1-3 weeks earlier than the competition." 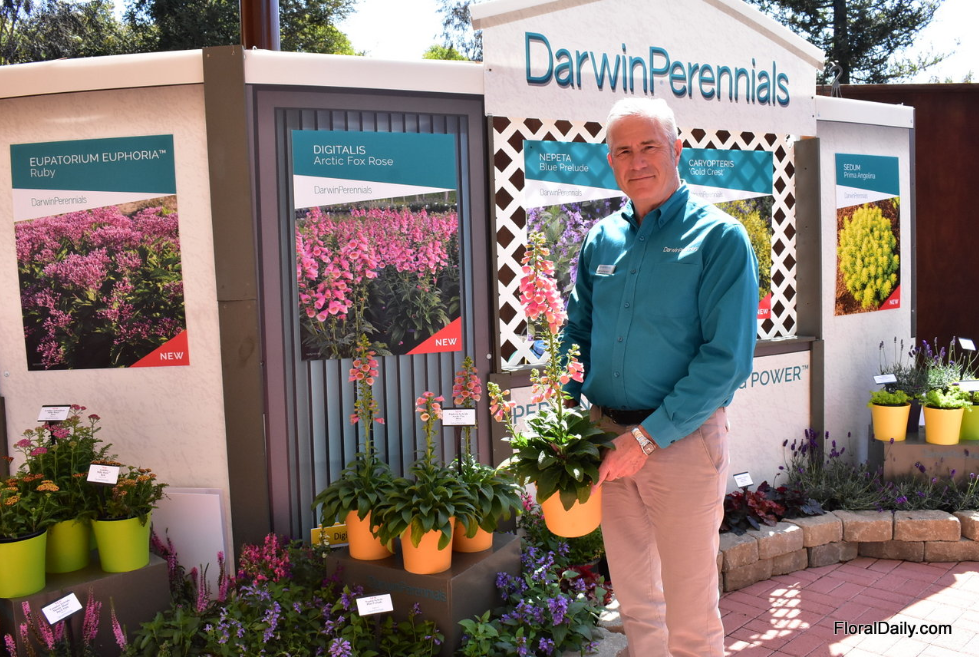 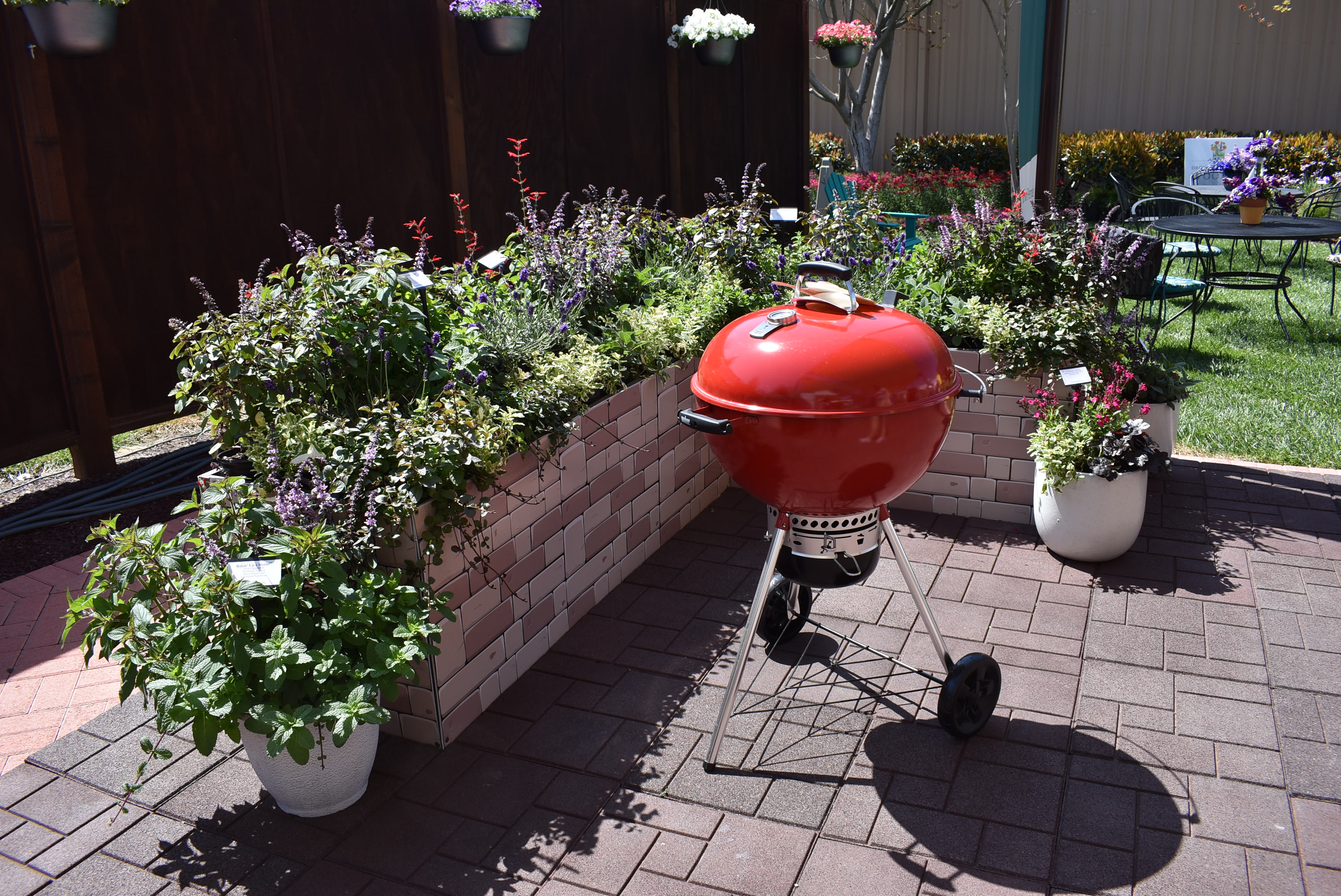 Herb-A-Licious Combos is a new concept, which contains plants with a purpose. This new line currently consists of 6 combinations. 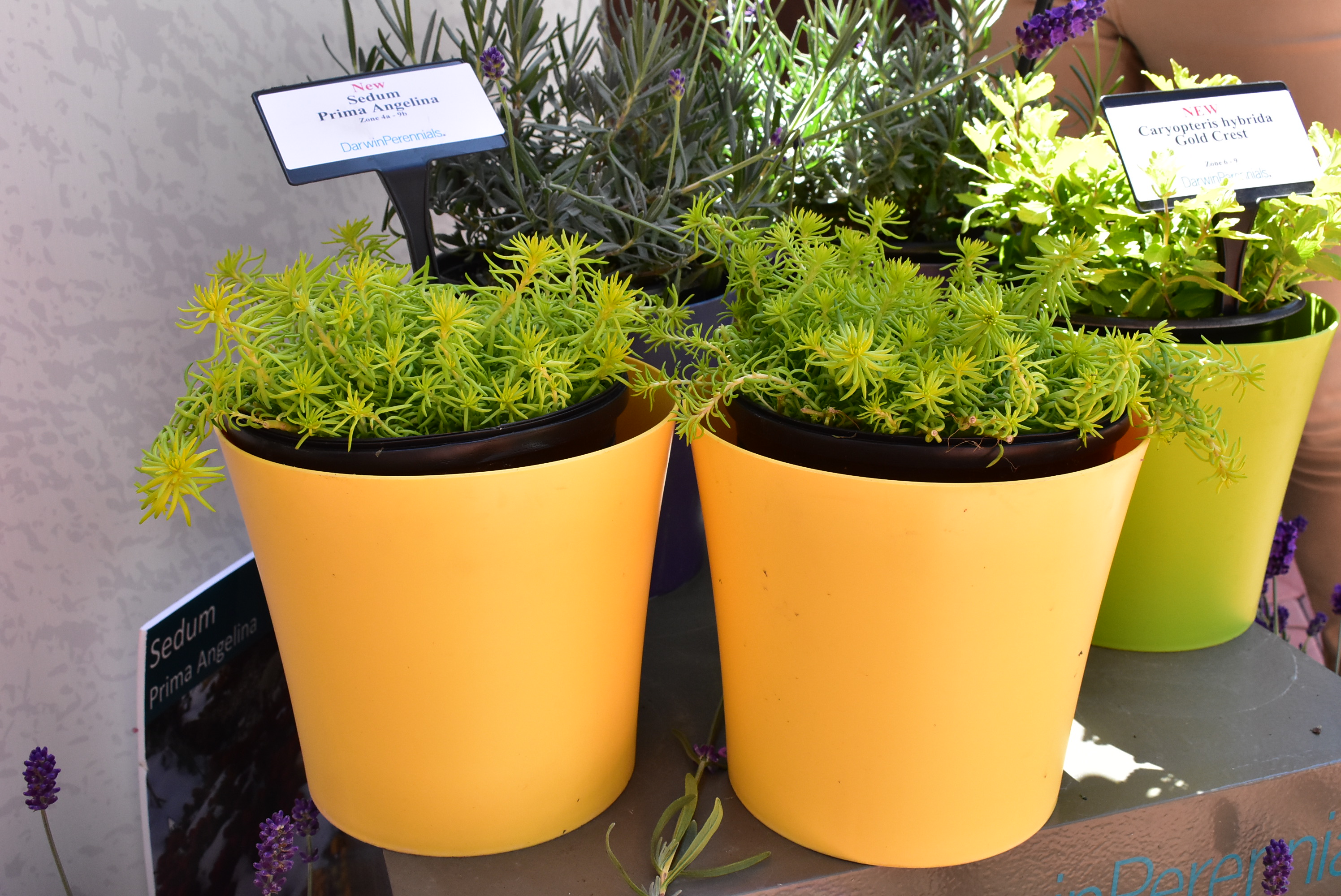 Sedum Prima Angelina is a sport of Angelina and is denser and more compact that Angeline. "On top of that, it has a more vivid golden color, that holds throughout the season." 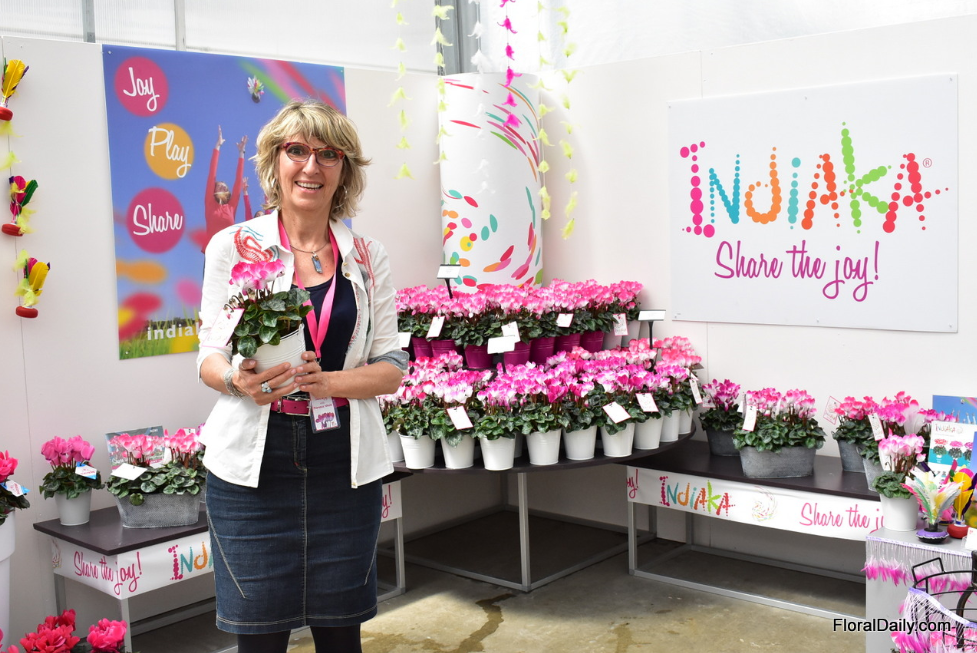 Florence Vaux of Morel presenting Indiaka. A new bi-colored cyclamen series. The series has more heat resistance with an intense coloring. “The contrast between the petals’ white base and its vibrant color at the tip of the flower makes a stunning show.” Also noteworthy to mention is that this French breeding company is celebrating its 100th anniversary this year and that they received the MPS certificate A+ at the end of 2018. 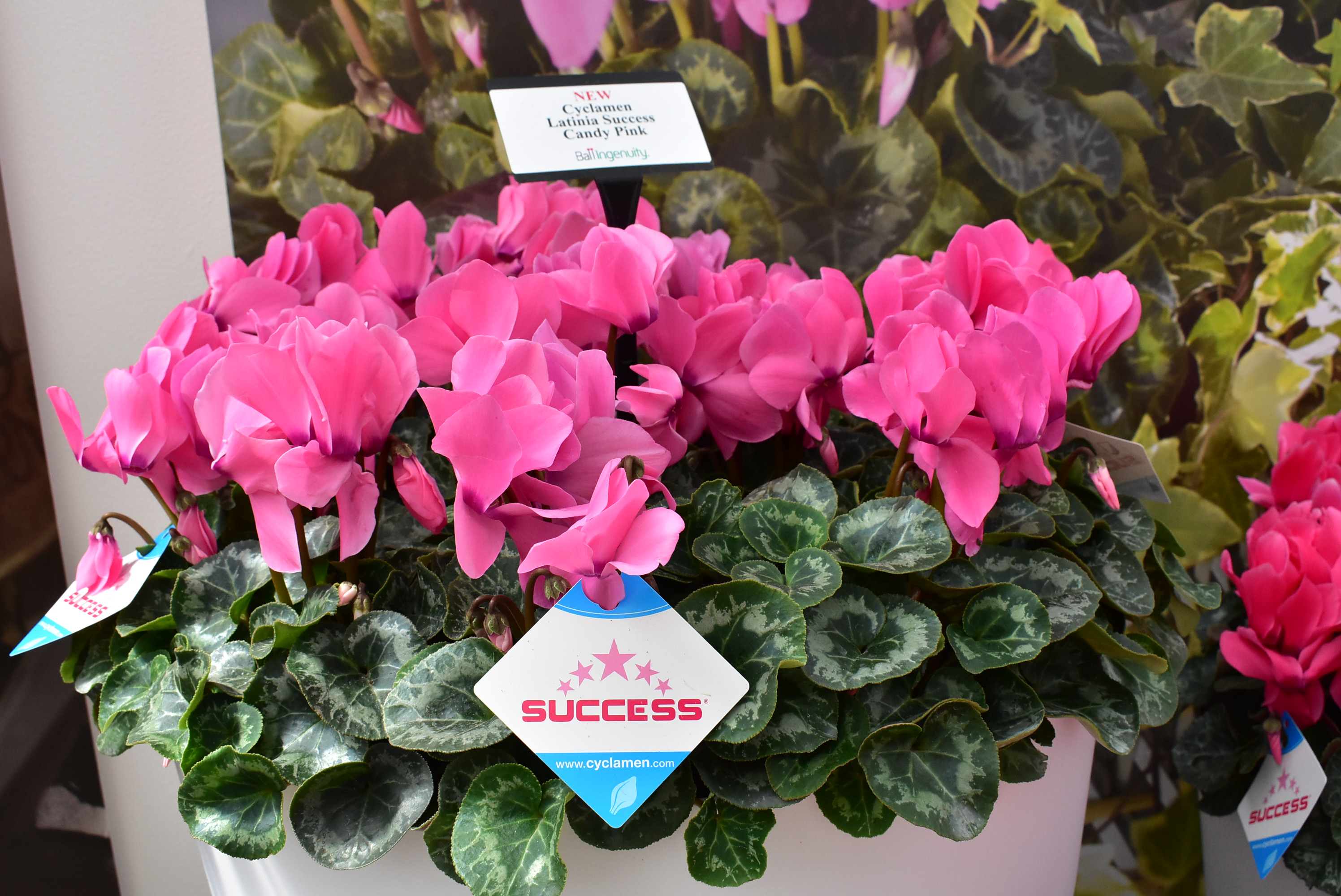 Cyclamen Latinia Success Candy Pink is one of the three new colors in the Success series. The series is characterized by its big flowers, earliness and strong growth, even in high temperatures. 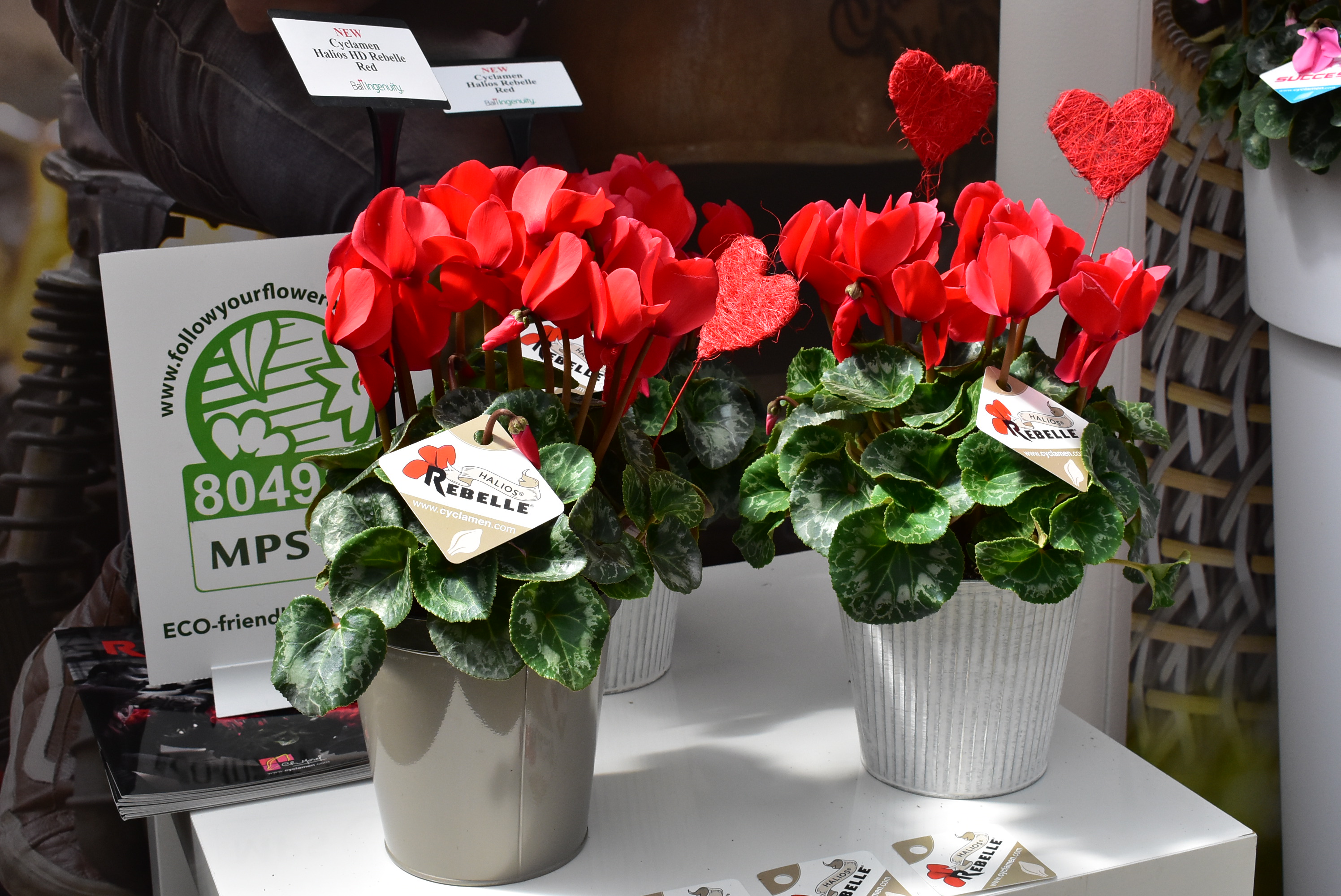 Cyclamen Halios HD Rebelle Red. Halios HD (High density) means that it is more compact compared to the other Halios. "Special about the Red Rebelle is, amongst others, the centralized 'bouquet' of flowers, strong stems and flower petals and less sensitive for burns." 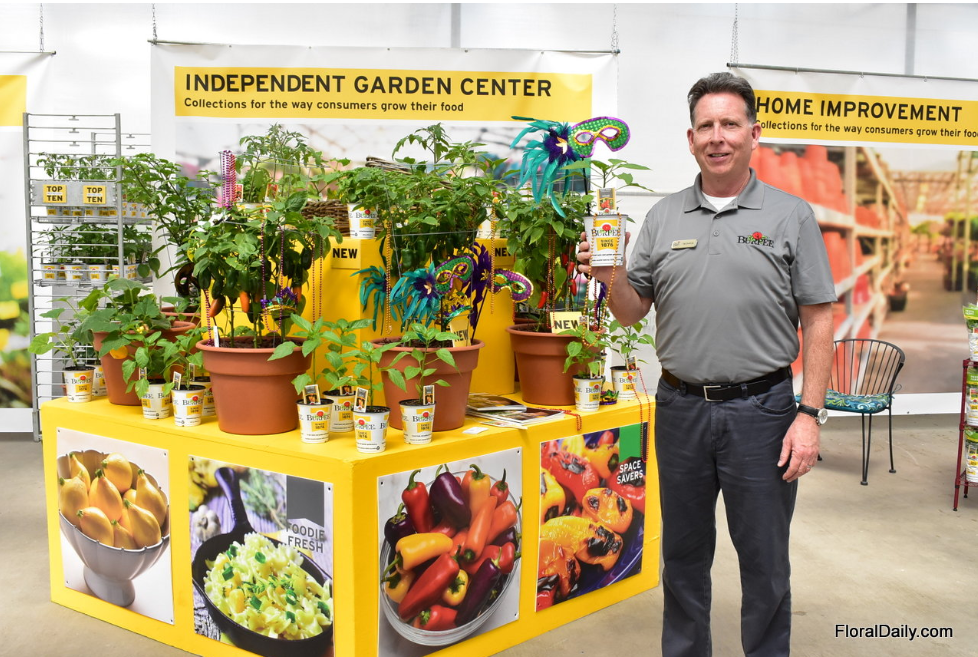 Tim Duffin of Burpee presenting Sweet Pepper Mardi Gras Fun Orange. The Mardi Gras Series offers four colors that can be grown together in one large container for a colourful patio display. “They are well matched in habit and timing across all colors.” 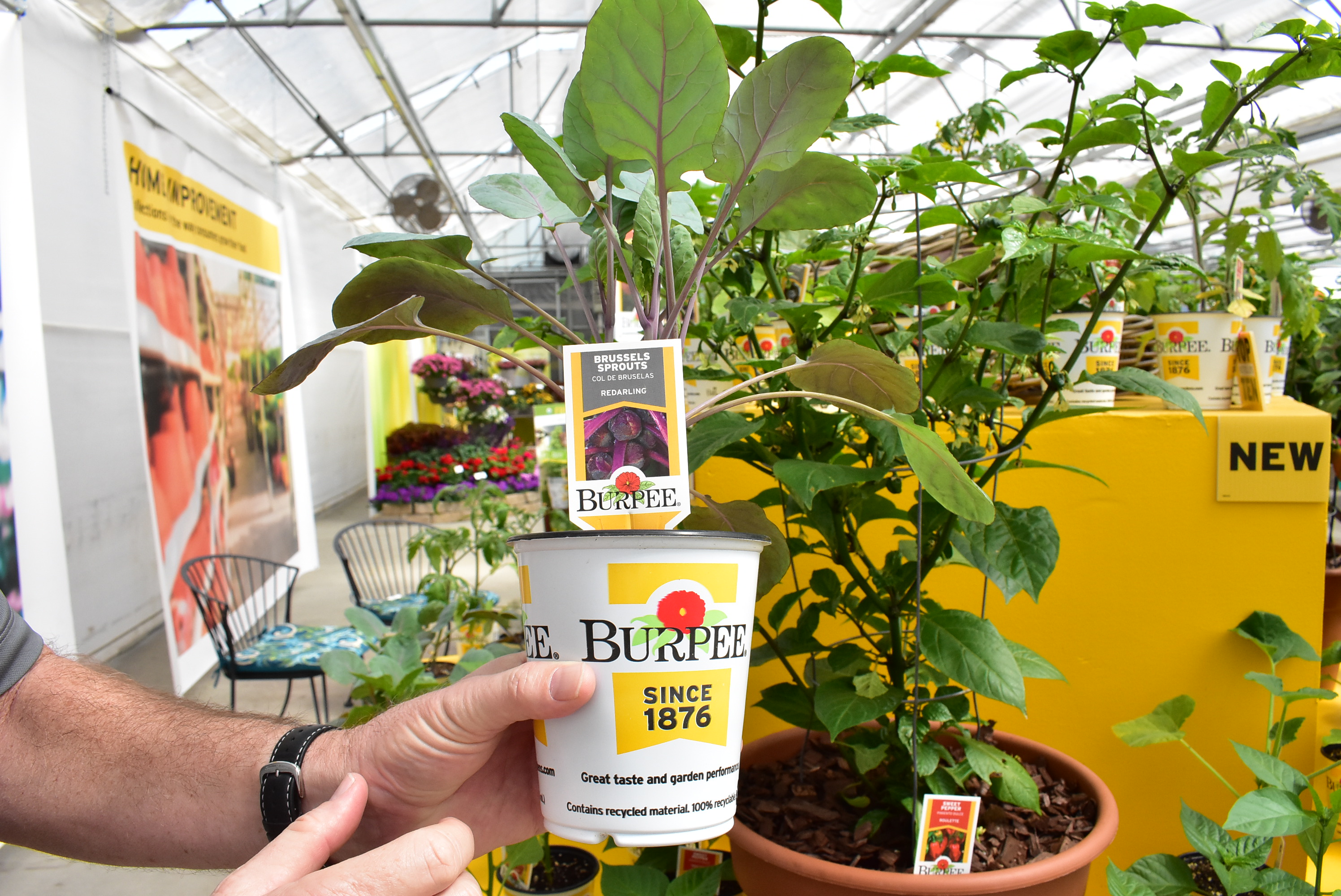 Brussels Sprouts Redarling produces red-purple Brussels sprouts which are said to have a sweeter flavor than most green varieties and are a rich source of Vitamin C and folic acid. On top of that, it is a high-yielding plant that stands up to cool nights and frosts. 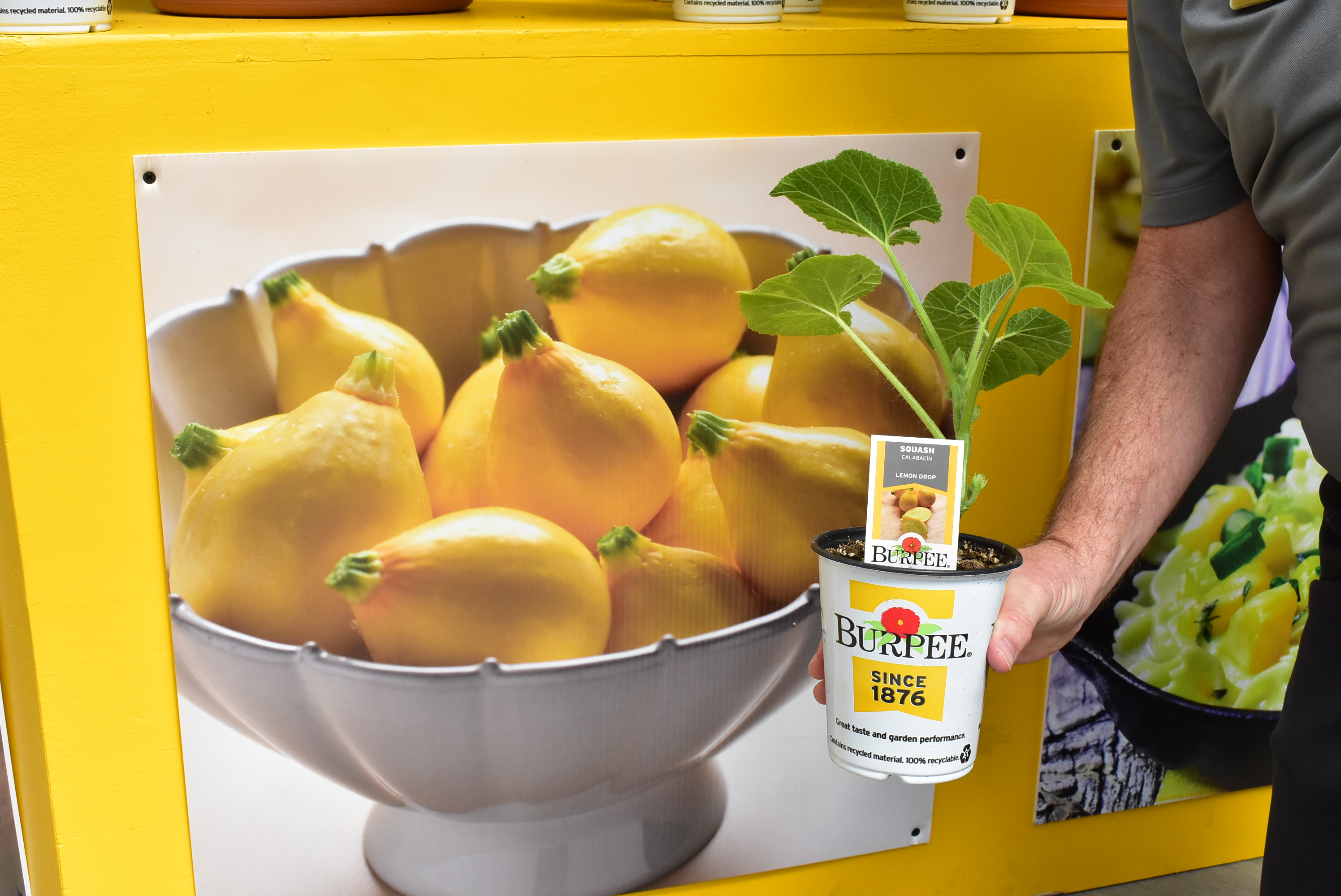 Squash Lemon Drop produces small lemon-shaped fruits. "It brings a new look and flavor to the table." The plant grows best in-ground and the creamy-yellow squash can be picked at a very young stage. 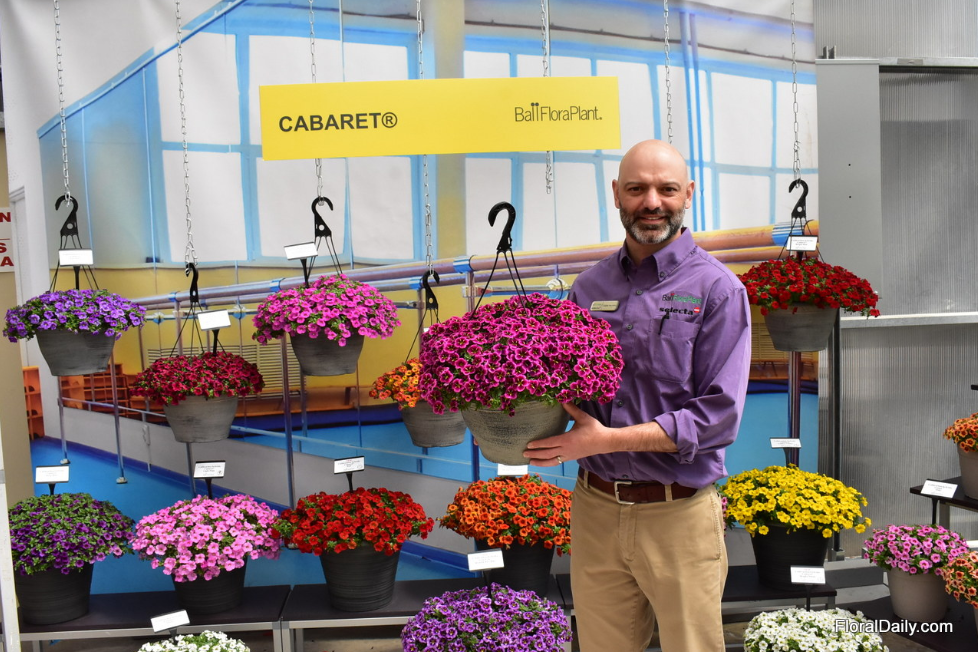 Jason Twaddell of Ball FloraPlant holding the Calibrachoa Cabaret Good Night Kiss, a new variety added to the Cabaret series. The entire series is early flowering, uniform in habit and flowering time, so all colors can be mixed. It is well-branched with full centers and most varieties flower with an 11 hour day length and stay open and in flower under low light conditions – a big plus for retail. 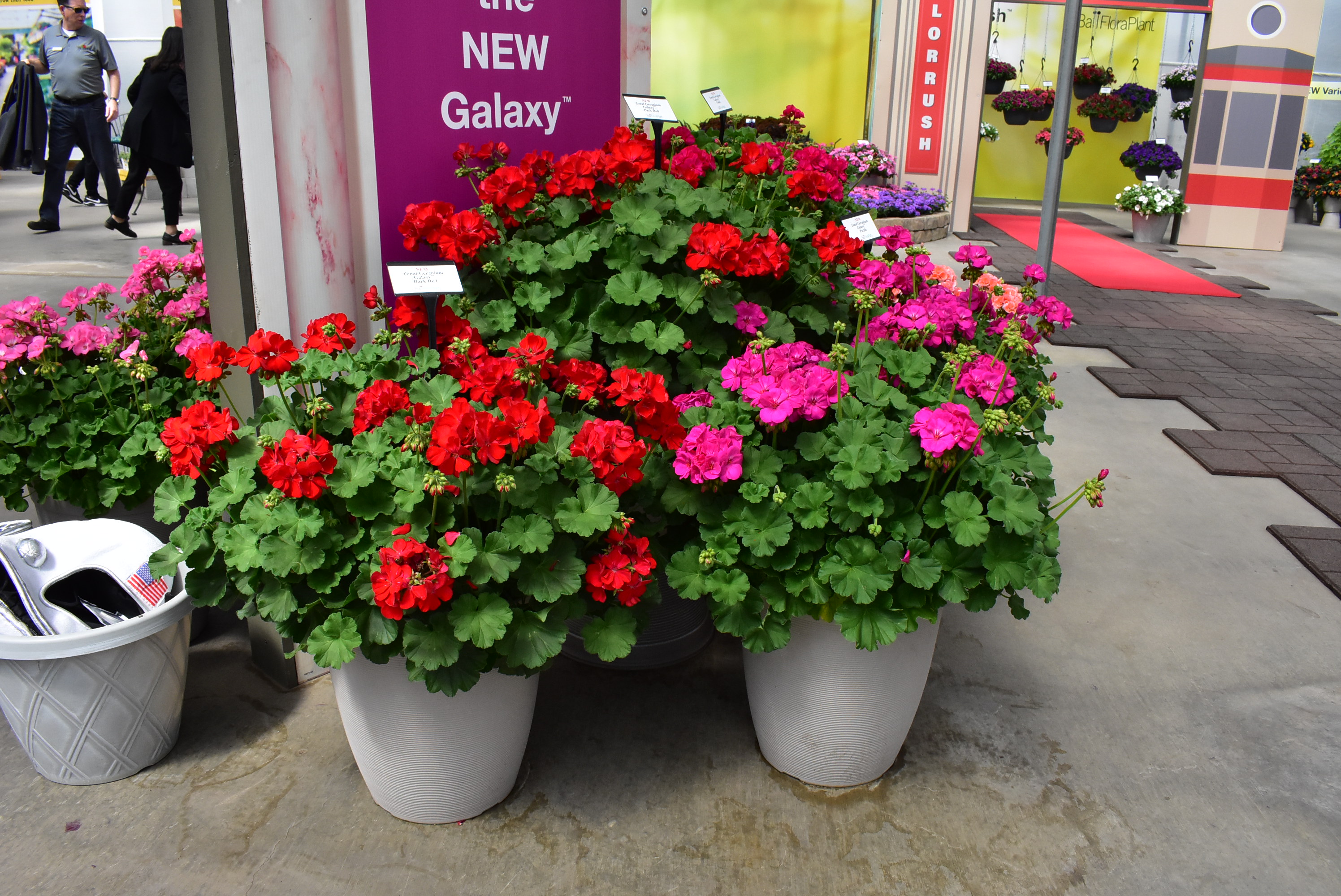 The Geranium Galaxy of Ball FloraPlant is a new series that is replacing the old Allure series. Ball FloraPlant collected 1MM data points and looked at 100k plants for their garden performance and travelled 238,900 miles (the distance to the moon) for trials. They trialed it at 8 sites across the USA. Result: "A geranium that produces mounded plants that are vigorous enough to keep their large, semi-double blooms all season in large containers and landscapes. It offers the best garden performance in the zonal geranium class, with a vigorous, but controllable habit." 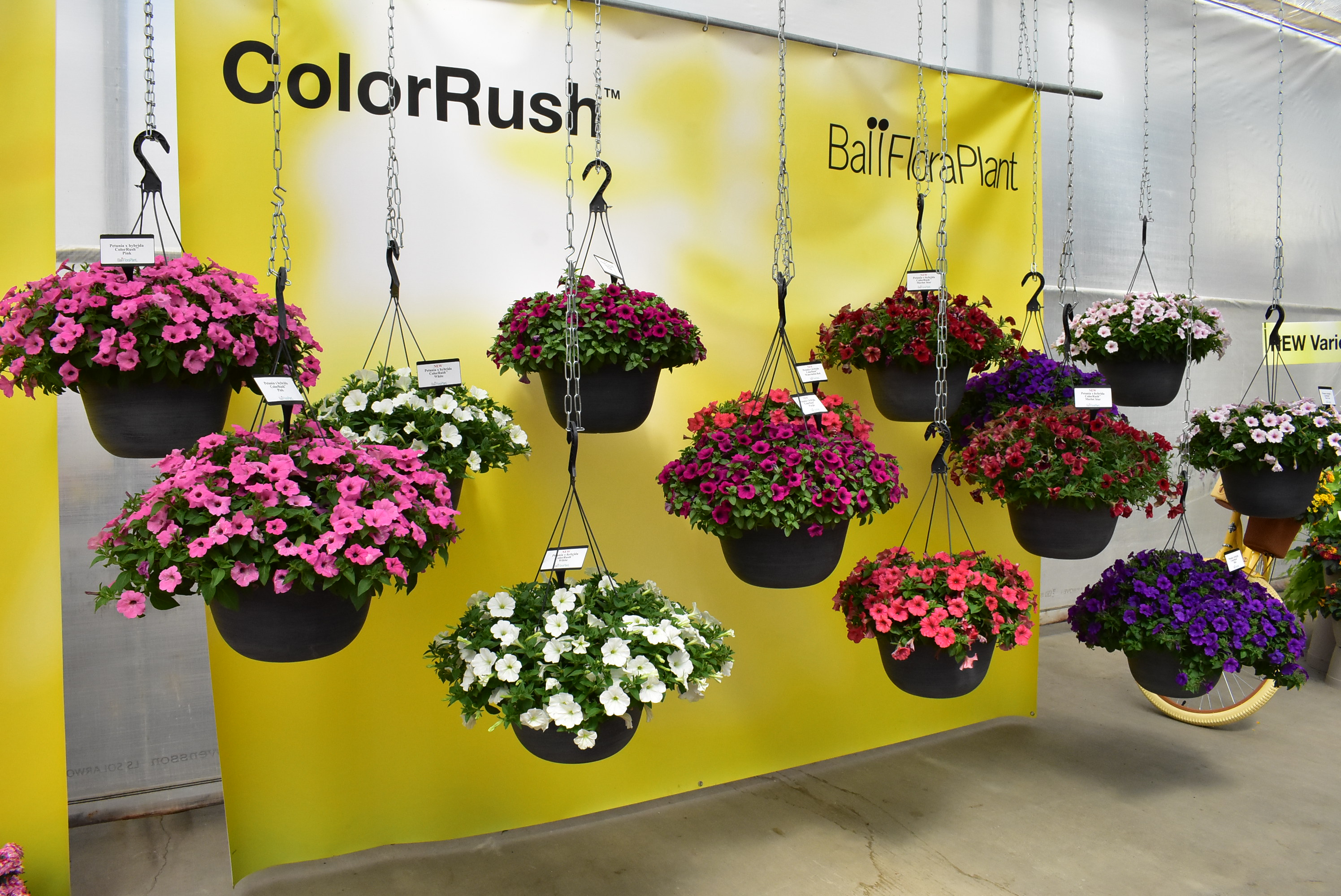 ColorRush Petunia consisted of a series of 3 colors. Now, they added 4 colors (Merlot Star, Purple, Watermelon Red and White). The series is characterized by its vigorous matching habits, which makes production planning easier and colors that hold up in the heat and rain. 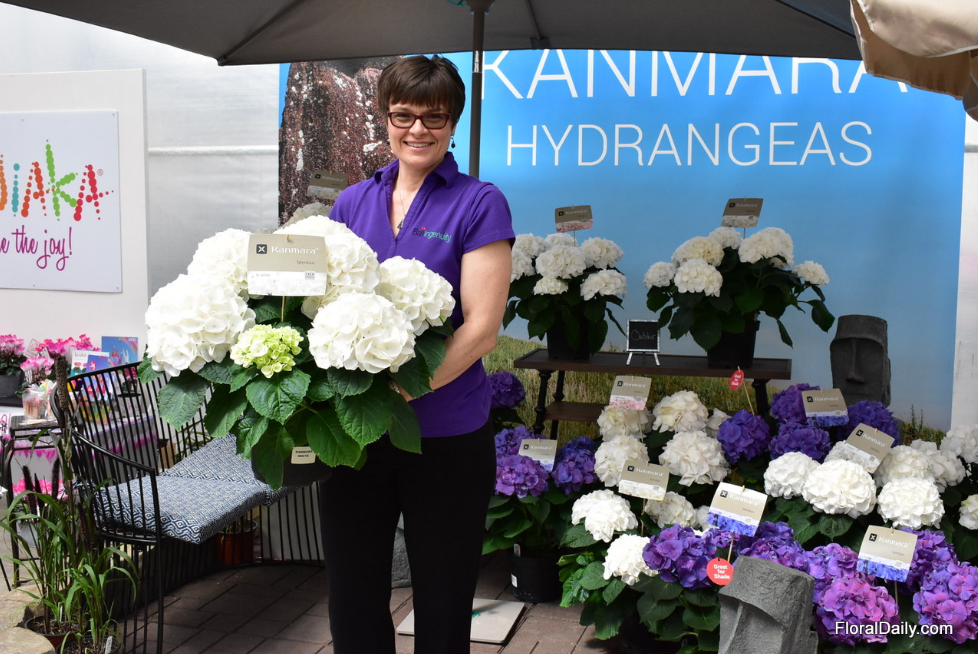 Joan Mazat of Ball Ingenuity holding the Kanmara Hydrangea. "It is a new generation of hydrangea with large blooms that will thrive in any shaded area." It is bred by HBA and supplied as dormant product (done by Aldershot). Currently, the Kanmara series consists of 5 colors. 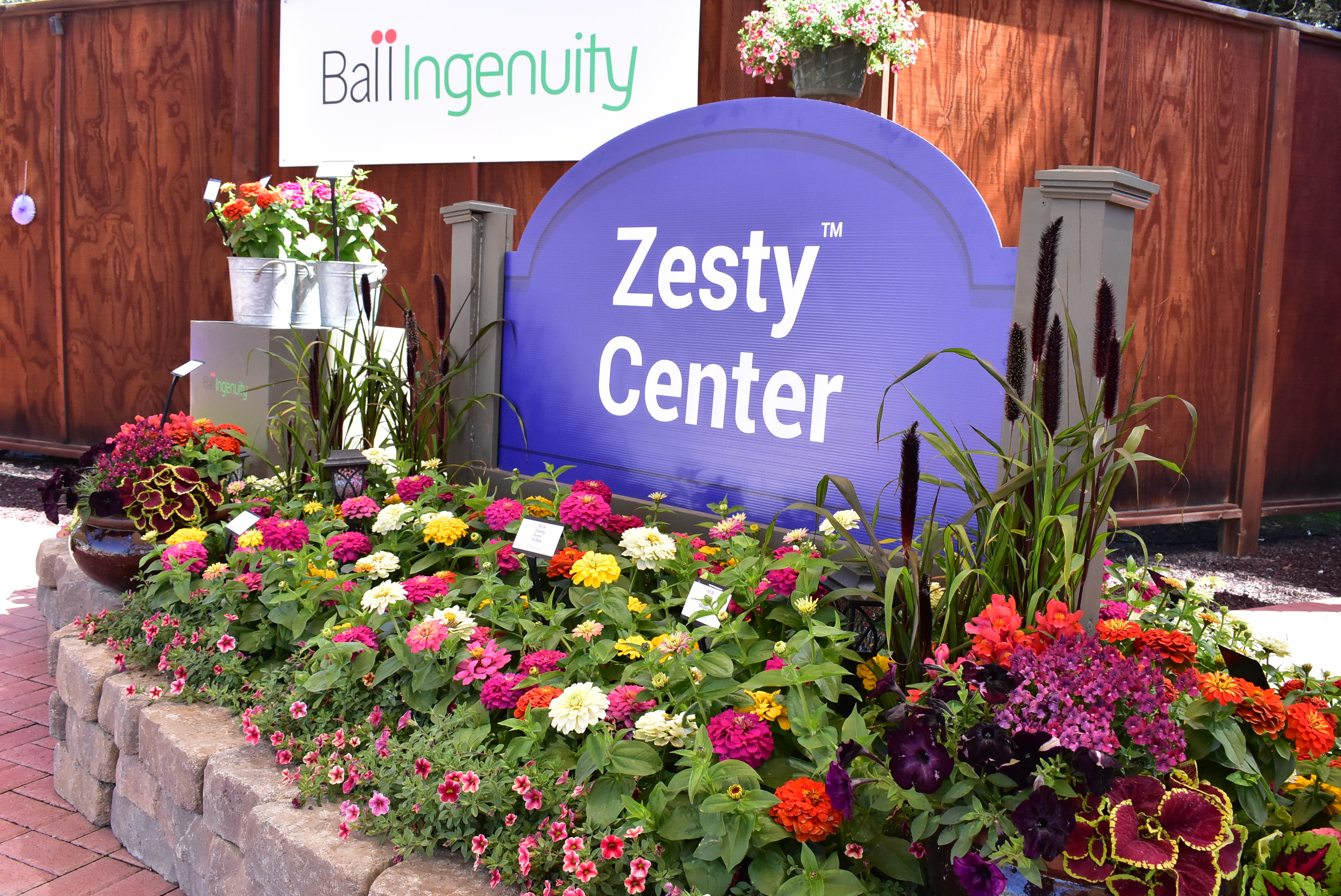 Zesty Zinnias are double flowered and display their color all season long. "They work well in containers, mixed combinations and borders." On top of that, pollinators seem to love this plant. 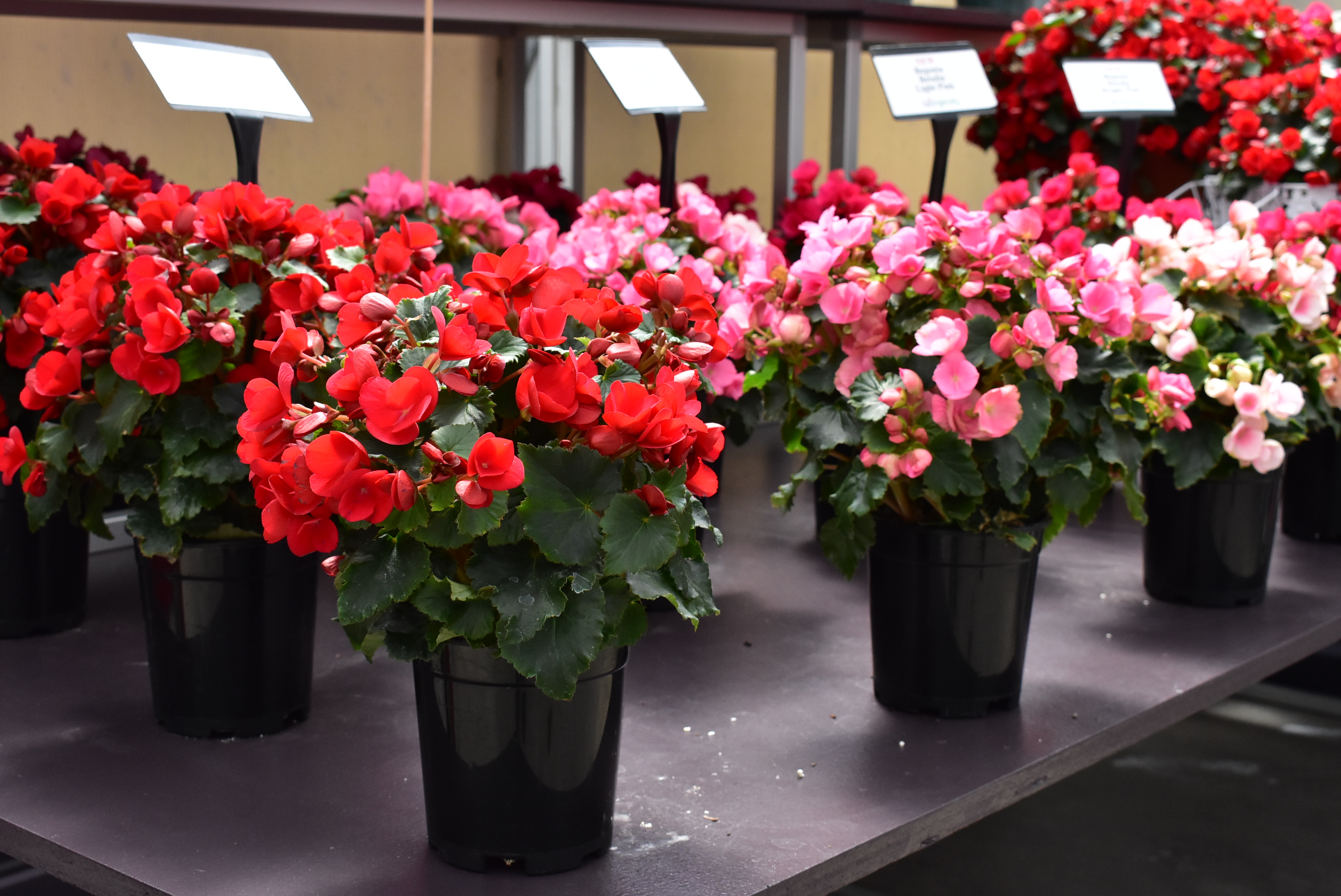 Betulia Begonia is a new durable begonia series brought to Ball Ingenuity by Koppe. It is heavy branching, no PGRs needed and is for indoors and outdoors. The new series currently consists of four colors. 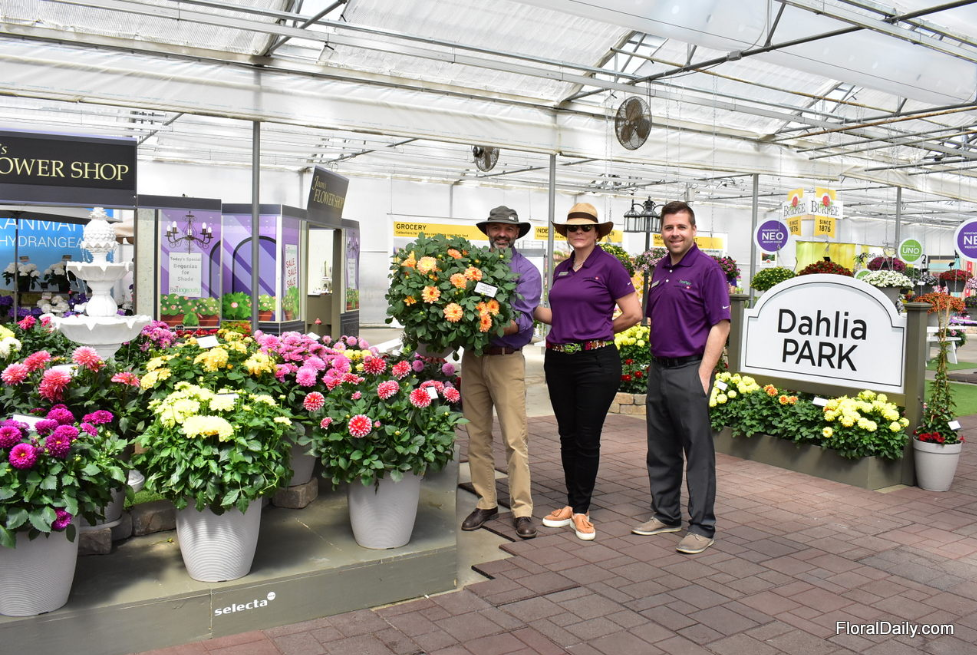 Jason Twaddell, Christine Nowicki and Eric Pitzen presenting the Dahlias in the Venti series of Selecta One, Jason is holding Tequila Sunrise. It is a uniform, vigorous series of double-flowered dahlias. "Sourced from a worldwide-proven dahlia cutting farm, Venti varieties have been trialed and grown throughout Europe and North America." 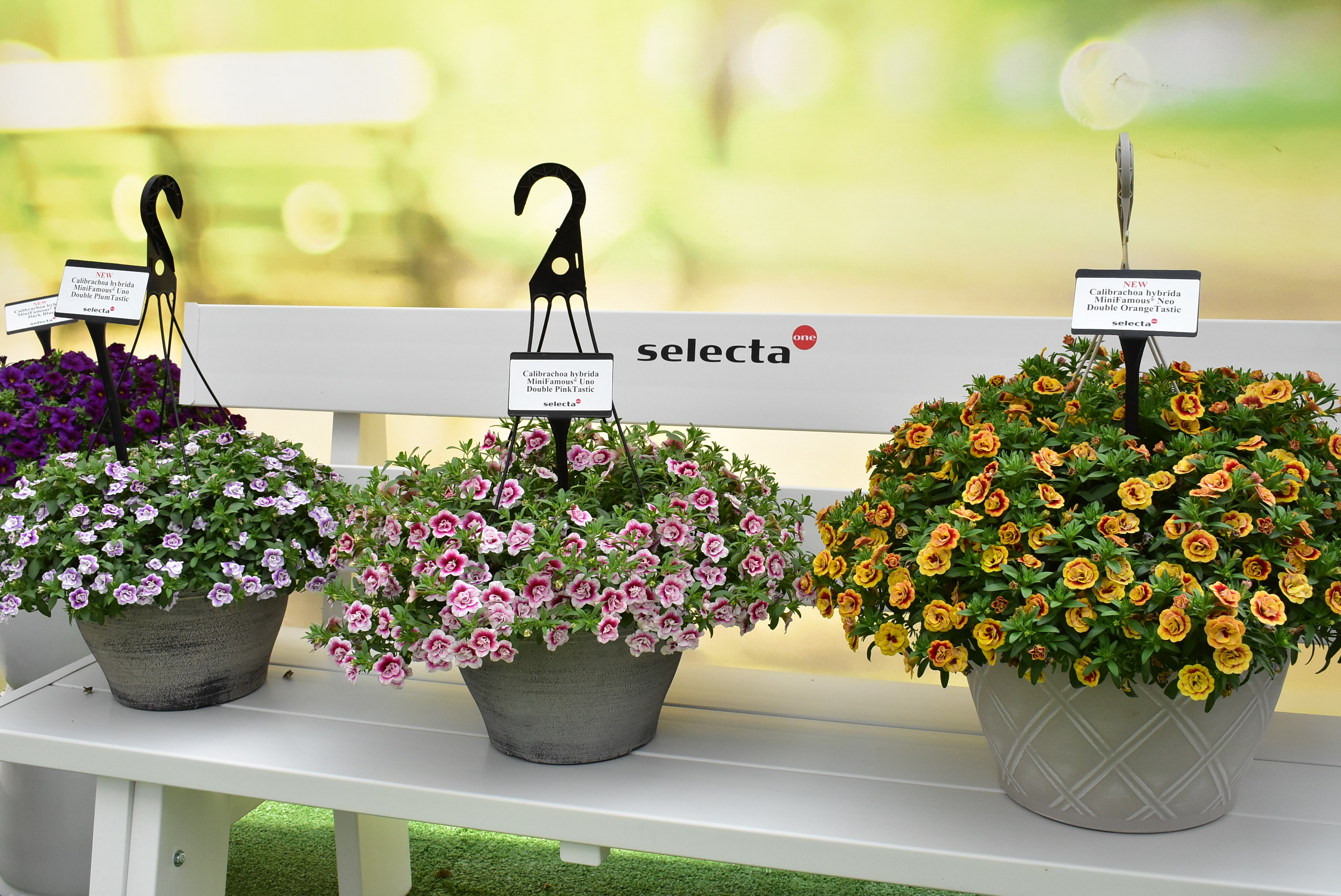 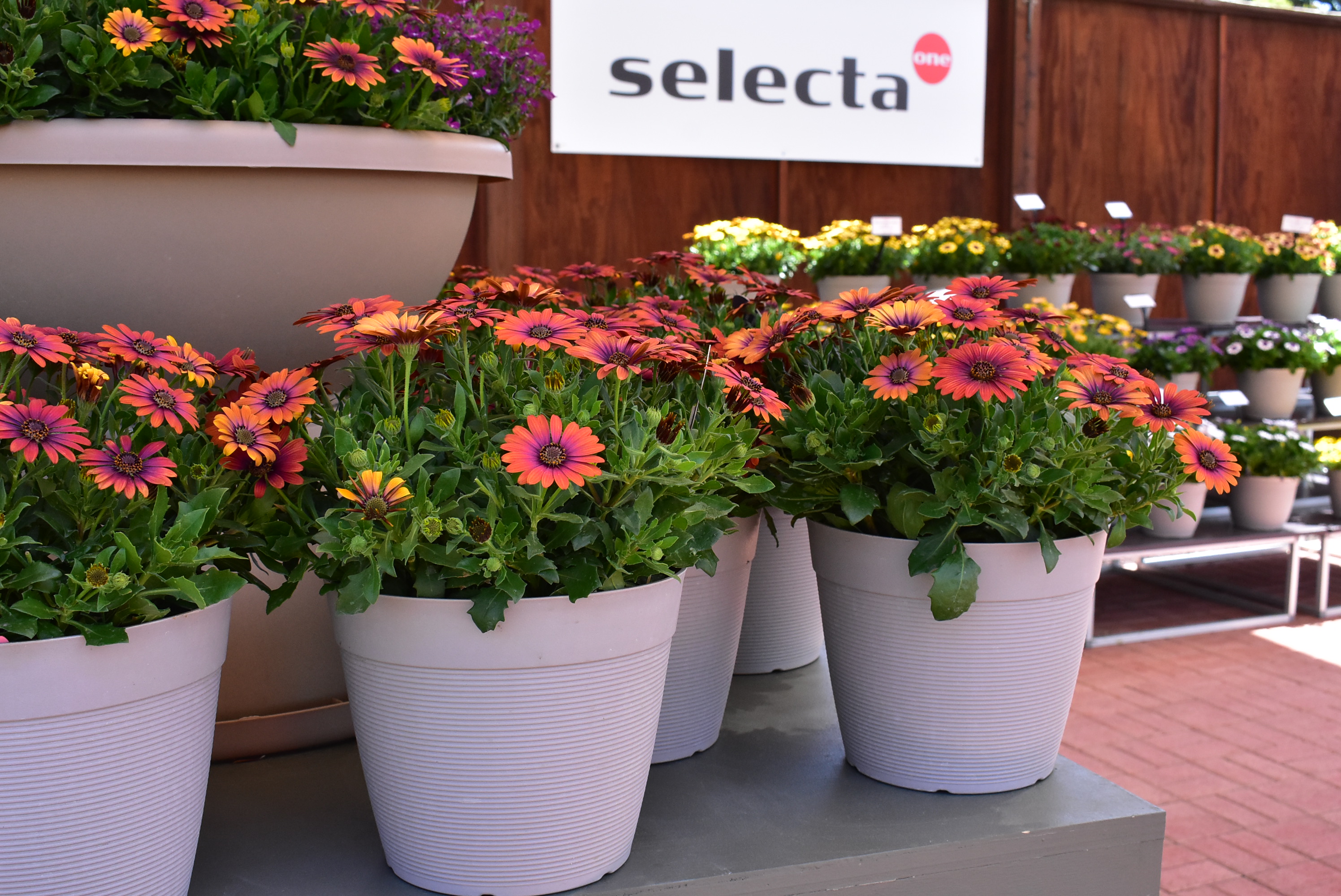 Osteospermum ecklonis Zion Purple Sun was of course also on display. It won the Fleuroselect award 2018 as it convinced the jury with its visual impact at point of sale and commercial potential. "Besides the striking color, the plant has a medium habit that will not split apart late in production cycle." 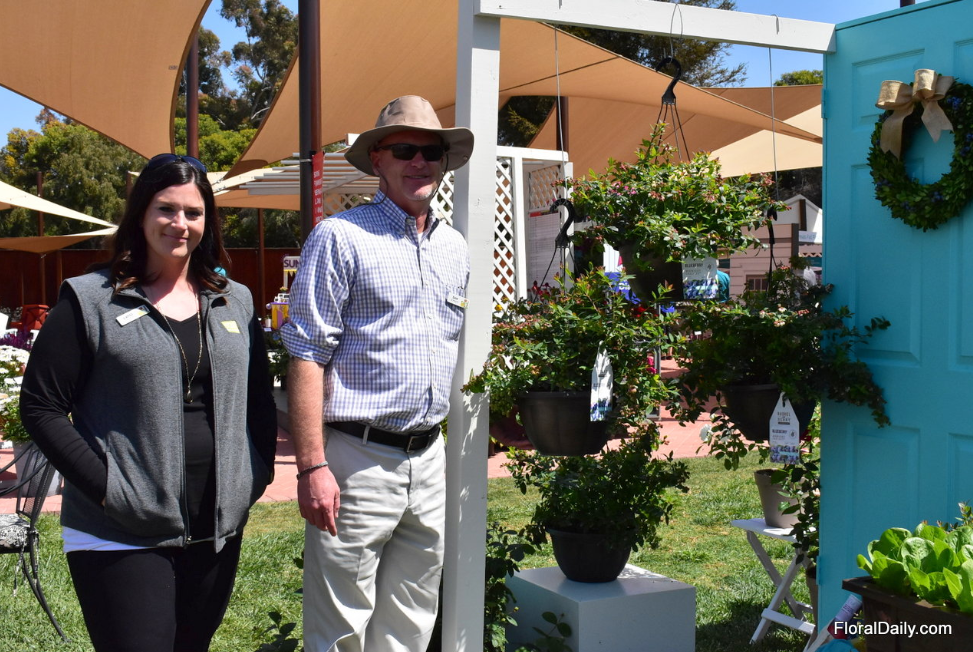 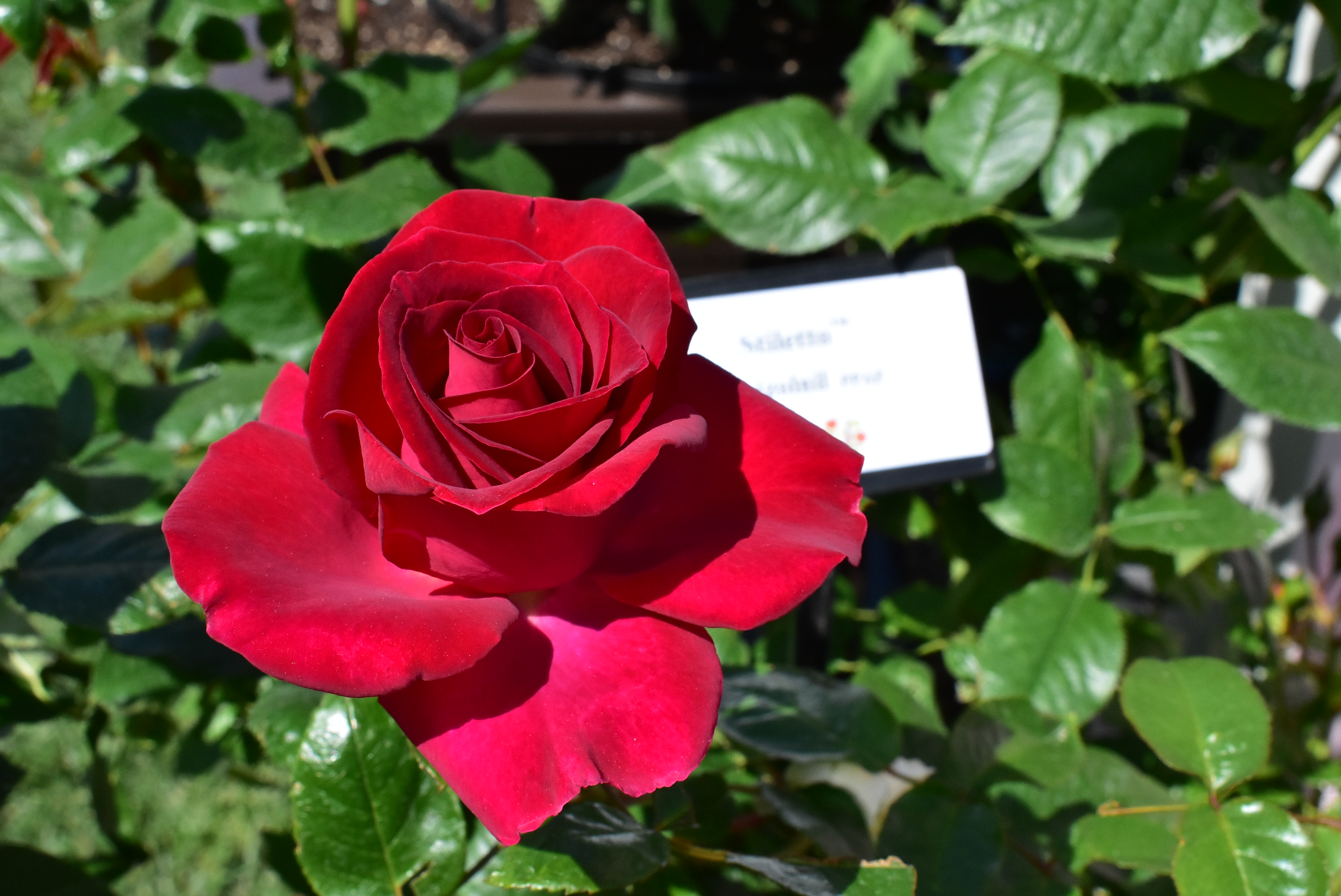 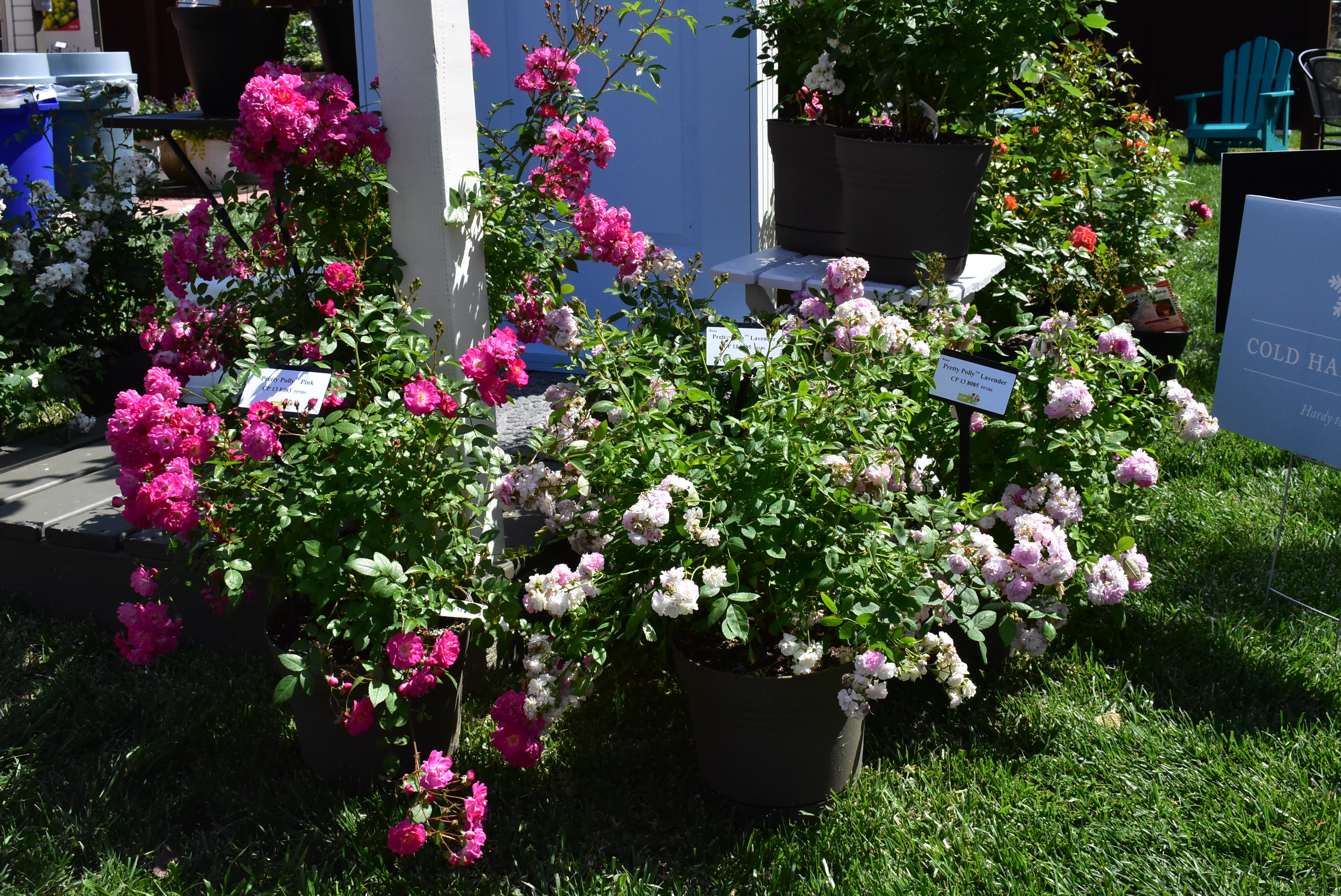 Pretty Polly is a new polyantha rose series that currently consists of three colors; Lavender, Pink and White. "The plants in the series have a very good disease resistance, an excellent flowering from Spring through Fall and are hardy to USDA zone 4. On top of that, it maintains a very pleasing compact habit in the Landscape."