A troublesome leafhopper, and a few (other) thrips

Several years ago a greenhouse grower called to ask about a leafhopper damaging rosemary grown for spring sales. Thanks to help from partners at the Florida Dept. of Agriculture and Consumer Services the culprit was identified as sage leafhopper, Eupteryx melissae. Since then I have had several complaints a year about the pale blotches and (sometimes) distortion it causes on foliage of rosemary, mint, sage, catmint and some related plants. In one high tunnel injury was serious enough to turn rosemary plants almost white. I rarely find leafhoppers as a greenhouse pest, but this one seems to have settled in for the long term; it also causes noticeable damage outdoors. Now established around the northern US, we’re not sure how this European import got around so quickly, but it may have followed the expansion of ornamental Nepeta in gardens. There is also a very similar species that causes similar damage to the same range plants, though we have yet to find it. A short article cited in the references has excellent photos to help in identifying and distinguishing the two.

Western flower thrips (WFT, Frankliniella occidentalis) more than earned its notorious reputation in greenhouse production for direct damage to flowers, foliage, and fruit as well as indirectly through transmission of tospoviruses. Documented resistance to almost 30 insecticide active ingredients, including at least 10 in current use here in the US labeled for greenhouse ornamentals, has enhanced its image. While it by no means has disappeared, in recent years the complaints are fewer, possibly thanks to several insecticides (still) working well, wider use of biocontrols, and emphasis on cultural management. Its domination left less room for discussion of other thrips. Here are a few interesting mugshots of thrips that crossed the Diagnostic Lab threshold in recent years. 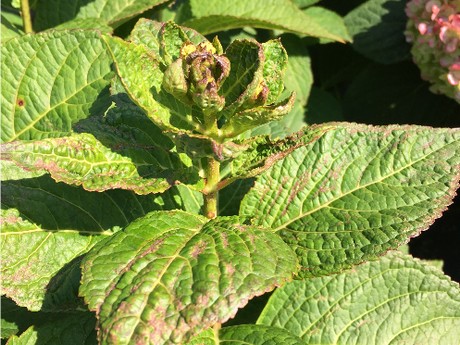 Chilli thrips (Scirtothrips dorsalis)
This non-native insect, established in Florida since at least 2005, is now a widespread horticultural pest there, causing damage to landscape (e.g. roses), foliage plants and others. It has taken on Texas, with reports from Alabama, California and Louisiana. WFT is inordinately fond of flowers and pollen (and foliage of some plants), but this species seems to be mainly interested in young vegetative growth. Leaf damage (scarring and stunting) looks very much like that from broad mite in many cases. A much smaller insect, it escapes notice hidden in unexpanded terminals until damage leaves start to expand. We’ve seen it on Schefflera and Hedera, but it has many other hosts. A different chili thrips is also now established outdoors in parts of the Northeast and we also see it in greenhouses, but almost exclusively on hydrangea (H. macrophylla, occasionally H. paniculata) – I have one report from deciduous azalea. I covered this in an earlier eGRO Alert [6(9): March 2017]. It’s possible our northern chilli thrips may actually be a separate species, otherwise identical in appearance to its southern counterpart. So far control has not been a problem with several labeled insecticides working well. We hope to have data from an insecticide efficacy comparison completed later this year. 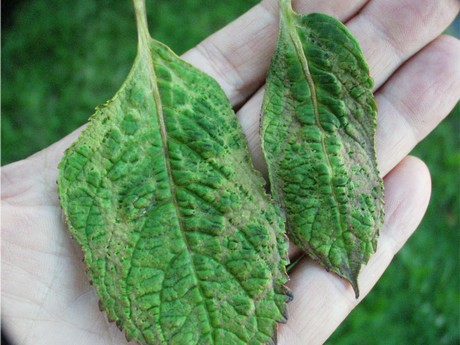 Poinsettia thrips (Echinothrips americanus)
The name reveals one common US host, but this insect feeds on many kinds of ornamental and food crops including impatiens, cucumber, rhododendron, and chrysanthemum. Like chilli thrips, it prefers foliage, but differs in being relatively easy to detect due to its larger size, black and white coloring, and habit of feeding while exposed on or under expanded leaves. Feeding damage may appear as a kind of bronzing or pale discoloration; on poinsettia we noticed white marginal discoloration around leaf edges. It also has not been difficult to control. 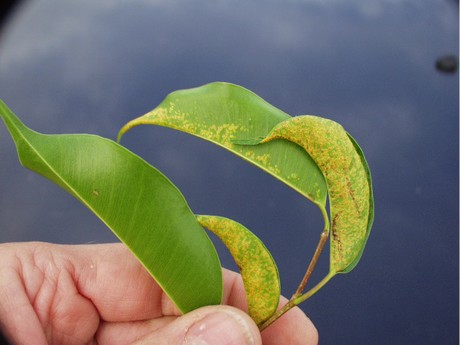 Japanese flower thrips (Thrips setosus)
We see samples of New Guinea impatiens with distorted foliage fairly often. I first wonder about tarsonemid (broad or cyclamen) mite, nutrition issues, or cool growing conditions. But in a case from last year Japanese flower thrips was responsible, the first I have seen. Foliage showed some bronzing as well. It has been reported from at least five other US states on hosta and greenhouse tomato; it is a pest in Japan on tomato and eggplant. A 2016 article (see references) noted cases of this on hydrangea from Holland. Despite the name, this seems to also be another (mainly) foliage feeder. 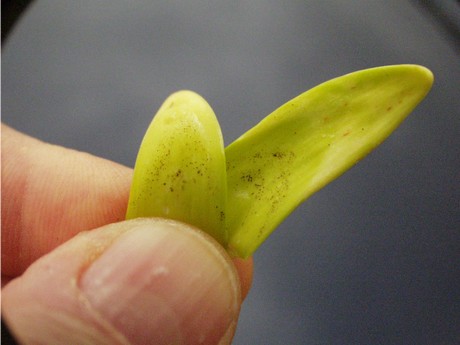 Early signs of feeding on narcissus from tobacco thrips

Ficus leaf-galling (weeping fig) thrips (Gynaikothrips uzeli)
Ficus benjamina is a popular interiorscape plant, but not when young leaves are heavily galled by this insect. Damage can appear as twisted and stunted foliage sometimes with necrotic (dead) spots. Young leaves can also fail to open, forming a sort of galled pod inside which the thrips are protected. Damage is dramatic enough that it leads to calls to the diagnostic lab. Here in the northeast it’s an occasional issue in greenhouses and interiorscapes; the insect is a common pest on F. benjamina in Florida where the plant is widely used in landscapes. 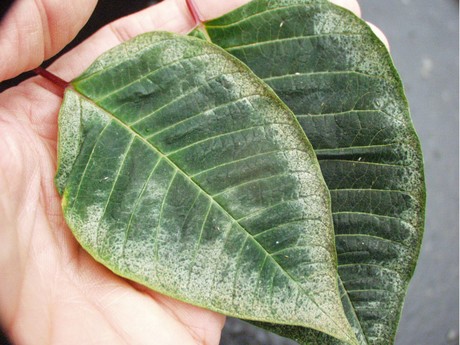 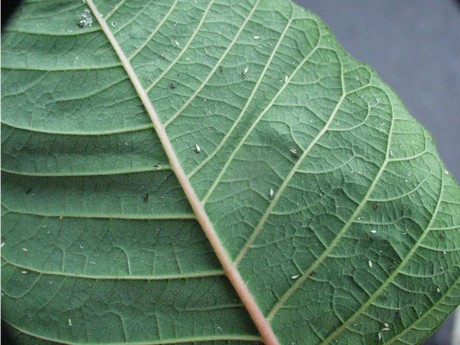 “Poinsettia thrips” on underside of poinsettia leaves. Immature stages are pale in color.

Tobacco thrips (Franklinella fusca)
Tobacco thrips is a common pest thrips in Southeast US outdoor food and field crops (peanuts, tomatoes, cotton, tobacco) with a reputation similar to WFT for both damage and virus transmission. I hadn’t come across it as a greenhouse pest until samples of narcissus bulbs used for forcing were submitted. (It has also been reported from stored Hippeastrum bulbs and on greenhouse lettuce). Other thrips (like gladiolus and onion) can also feed or overwinter on stored bulbs, so this in itself wasn’t particularly surprising, but it was an unusual sighting. In this case the thrips were detected when new growth showed symptoms of damage. 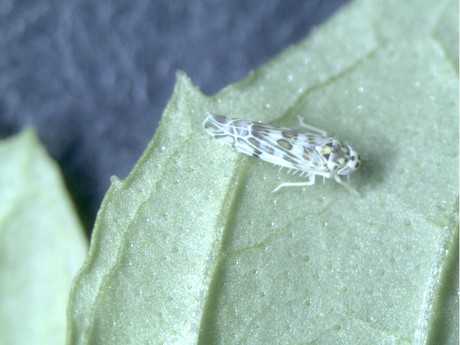