US (NY): Raymond Fox ’47, emeritus professor of floriculture, dies at 96 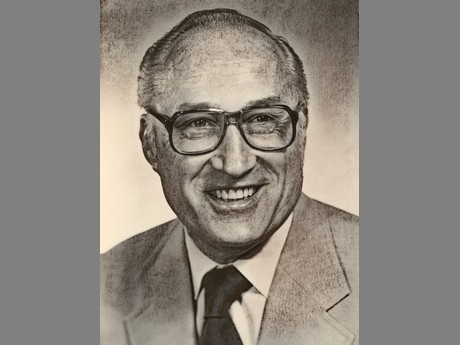 Fox was born Aug. 31, 1922, in Corning, New York, the son of Joseph and Marie Hauer Fuchs. After receiving his bachelor’s degree, Fox began his Cornell career as an instructor in the Department of Floriculture and Ornamental Horticulture the same year. He subsequently earned his master’s and doctorate, also at Cornell, and was promoted to full professor in 1979, serving until his retirement in 1987.

His late wife Vera ’48, who died in 2009, was also an accomplished horticulturist.

Fox was legendary for tirelessly organizing and leading brigades of volunteers to set up floral displays at campus events, even after his retirement.

In his address at the university’s 129th Commencement in 1997, then-university president Hunter R. Rawlings III paid him tribute: “[This] Commencement represents the 50th year that Professor Fox, with help from an enthusiastic band of volunteers, has coordinated the floral arrangements for Commencement Weekend. For 50 years, it has been truly a labor of love.”

“He was a superb floral designer – both in composition of a single piece as well as grand displays,” said Professor Emeritus Tom Weiler, former chair of the Department of Floriculture and Ornamental Horticulture. Fox was a key figure at the now-defunct New York Flower Show and the iconic spring flower display at Macy’s department store in New York City. 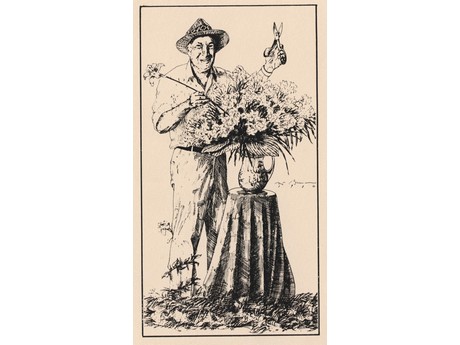 Sketch from program from Fox’s retirement celebration in 1987

To appreciate Fox’s contributions requires an understanding of how the floriculture industry has changed since its heyday, Weiler said.

“In the 1950s and ’60s, you never saw ‘in lieu of flowers’ on funeral announcements,” he said. “Elaborate floral arrangements were essential at most every social occasion from weddings and funerals to dances and other public functions.

“The emphasis was on locally produced flowers,” Weiler said. “Cut flowers were a much larger segment of New York’s greenhouse production, and Ray was the center of Cornell’s support of retail florists.”

Fox often spoke to florist organizations, garden clubs and county Cornell Cooperative Extension audiences. He authored or co-authored many popular consumer publications, including “The Selection, Care, and Use of Plants in the Home” and “Techniques for Propagation of Plants for Interior Decoration.”

Funeral arrangements are incomplete and will be announced.