US (AK): Peonies take couple from the ocean to the farm

After 40 years of running a charter fishing business in Homer, Alaska, Gerri Martin and her husband, Sean, have embarked on a retirement plan that really isn’t very retiring.

They decided to start a completely different business. 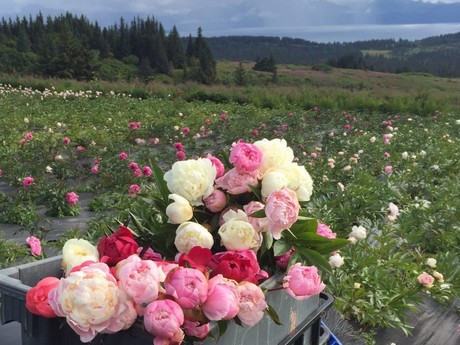 They’re in their sixth year of growing peonies on their 15 acres of property that overlooks Kachemak Bay. Diamond Ridge Peonies, a Certified American Grown farm, is just starting to hit its stride as the Martins ease themselves out of their fishing business, North Country Halibut Charters.

It’s the culmination of a plan that began years ago as the couple looked at what lay ahead for them. The seed for Diamond Ridge Peonies was planted during a conversation Gerri Martin had with a friend. 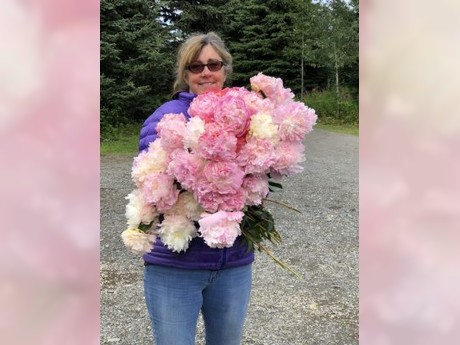 Gerri Martin shows off an armful of the peonies that fill her life now.

“I was grousing about being kind of tired of the charter fishing business with one of my girlfriends here in town and she said, ‘Oh you should start growing peonies. It’s like waking up in the morning with your cup of coffee and walking down and watching your flowers grow.’

At that time, peonies had just taken off as a crop in Alaska. In the early 2000s, a government pilot project found that the flowers thrived in the state’s long summer days and were ready for harvest in July and August, a time when the rest of the world’s annual supply of peonies had been picked and sold. It also coincided with the summer wedding season, which the big, showy blooms seem tailor-made for. And the flowers were relatively lightweight and perfect for export via air. Alaska went from zero peony farmers in 2004 to more than 200 by 2014. 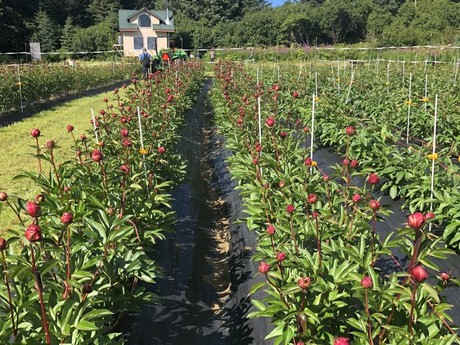 The Martins got serious about growing peonies a couple years after Gerri’s conversation with her friend. They knew their 15 acres were an ideal spot for growing peonies. Their lack of farming experience did not faze them.

They attended the Alaska Peony Growers Association to learn more and got involved in that group’s new growers program. What the Martins found was a community of Alaskan peony growers who are eager to help newcomers.

“The environment up here is enthusiastically helpful about this new industry,” she said. “If you’re going to be growing peonies, everybody up here wants you to be growing the best dang peonies there are. Everybody is just super encouraging.”

Gerri Martin said getting a peony growing operation is more slow than difficult. Three years after planting, the Martins sold some flowers at a kiosk at their charter fishing business. But it wasn’t until year four that it was really a business.

“Our fourth year was big for us,” she said. “We were really happy to be able to sell all of our flowers. Our field just busted open and it was amazing.”

Last year, the Martins harvested 40,000 stems and they’re looking forward to another bountiful harvest this year. 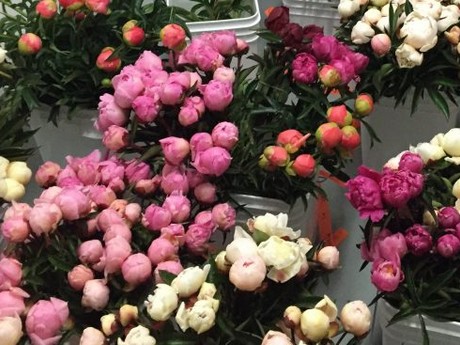 To sell their flowers, the Martins have relied on a couple of big wholesalers. But they also sell via the internet and market through Instagram and Facebook.

“We all want to sell to the brides because that’s the top dollar,” she said. “But last year we had 40,000 stems and there’s not that many brides out there. So, we have to diversify. We have a pretty good balance.”

Getting Diamond Ridge Peonies off the ground has been a lot of hard work but has gone relatively smoothly. Martin credits that to the fact she and her husband have run their own business for 40 years.

“We know how to network with people because we’ve done it for years,” she said. “Yes, it’s another business, but it’s not entirely different.”

Looking to the future, the Martins expect one of their two sons to take over as their farm manager. Their other son is a fishing boat captain. For the time being, they are content with their operation.

“We think we are where we want to be,” she said. “I think our potential is sitting right there in that field as it matures.”