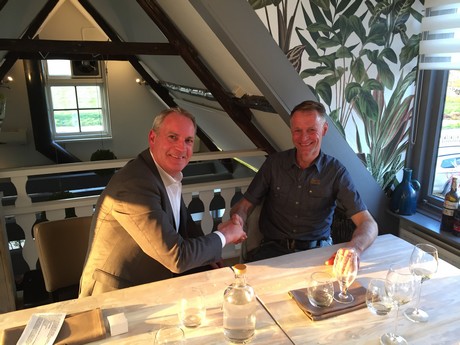 In his word of thanks, Jan Willem Griep emphasised Jos' critical scrutiny with an eye to cost, his feeling for the sector and his humour, which was aimed mainly at the football insight of the chairman. "It has been a pleasure to contribute to Plantarium as a leading trade fair in the Netherlands particularly", says Jos Straathof, who was visibly moved by the words spoken by the chairman.

Extra shine
The Gold pin gains extra shine due to the numerous other contributions Jos Straathof has made to the sector. He was, for instance, closely involved in the study club LTB and later in study club Regio Boskoop, Stichting Kringfonds and the Boskoopse Veiling.

Board complete
Wouter den Hollander from Kolster BV from Boskoop will succeed Straathof in the Executive Committee. Two new board members, Johan Stolwijk from Joh. Stolwijk & Zonen from Boskoop and Tieme van de Haak from F.N. Kempen from Mijndrecht, joined the General Board in February. Together with the new board members, the Nursery Trade Fair Foundation is again faced with the challenge of taking the trade fairs Plantarium and Garden Trials and Trade to the next episode.