Everyone wants a piece of the Chinese pie

With the high population and a growing economy, the Chinese market is like a heavy chocolate almond pie: just a little piece of it will satisfy you. At the HortiFlora Expo Shanghai that was held last weekend, 900 companies cut their first slice, or went for a second serving.

FloralDaily.com was at the show to make a photo report and to get a better insight in what's happening in this interesting rapidly developing market. 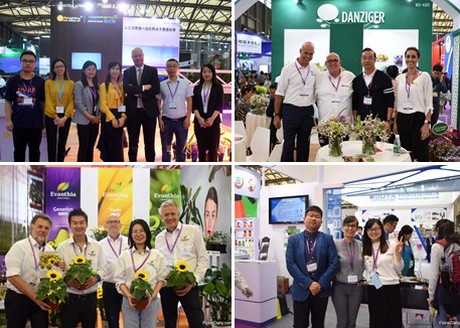 Clockwise: The team of Megaphoton, team of Danziger (with a visor), team of Evanthia and part of the team of Oboya Horticulture.

When walking down the aisles and talking to the exhibitors and visitors, how do they think the Chinese market is developing? In general, we hear that it really took off 5 years ago and the developments are visible in several industries. Below a small summary of what we heard.

Automation
In several areas, labor has become more expensive and/or scarce, and the fact that the government gives subsidies to the growers to invest in optimizing processes in the greenhouse, means that many growers are opting for more automation solutions. Step by step, more and more manual processes are being replaced by machines. And let's not forget quality is also becoming increasingly important, and this can be achieved through automation too.

Imported flowers
China is a country that is used to exporting, but over the last years South American and African growers have been entering the market. Ecuador was one of the first to enter the market due to the uncertainty they perceived in their main export market, Russia. In 2014, 1 million FOB was exported to China and in 2018, the 12 million mark was surpassed, Flor Ecuador reported.

However, the market hasn’t reached its climax at all yet and still many improvements can be made in several areas. Below again a summary.

Language/cultural barrier
Language is still one of the main barriers in the country. To enter this market, it is best to have a Chinese speaking person in the company. And preferably a native speaker that understands the culture. It takes time to create a relationship, but once forged, they are for the long term.

Growing the crop
Building a greenhouse and installing machines. It is a piece of cake and goes very fast nowadays in China. But then the real work starts: growing and maintaining the crop. And this often still is a challenge. Particularly for the vegetable industry one sees a lack of knowledge. However, for the ornamental industry, there is still a lot to learn as well. Most plants, for example are grown from seed and vegetative cultivation is something new, of which the long-term benefits need to be explained.

Intellectual property rights
Illegal propagation is still a major issue for the breeders and the Chinese distributors. There are breeder rights now, but when it happens often not much can be done regarding receiving the royalties. However, an awareness of the benefits of legally propagated plants (for which royalties are paid) is being recognized among more and more growers; it will not only improve the quality of the product, it will also give them access to novelties.

Infrastructure imported flowers
Importing flowers is relatively new for the Chinese importer. There is just little knowledge about handling flowers when they arrive. They do not seem to be that familiar with a cold chain, but more and more is being learned and growers are investing in teaching the importers how to deal with the flowers.

This is just a short overview. Later in FloralDaily, we will go deeper into each of the different subjects mentioned.

But for now, curious about the Hortiflorexpo Shanghai? Click here for our photo report.