It is one of the busiest times of the year for German hydrangea young plant and finished plant grower Pellens Hortensien. The half ready and finished plants are being shipped out and the preparations for next season are in full swing. Even though a quite challenging run-up to the season, owner Andreas Pellens is pleased with the sales so far and particularly the increased quality of his products. "Last year, we started to apply container mulch to the top of the cultivation planters. As a result, the rooting is more equal, there are less weeds, plants can better handle stress and phytophthora problems decreased considerately. On top of that, it saves over 20 percent water per year." 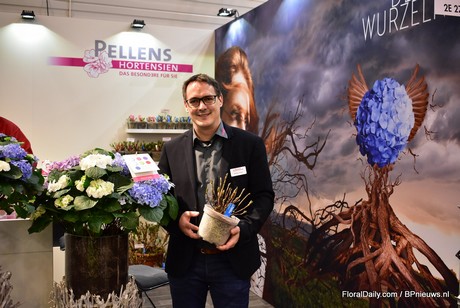 Andreas Pellens at the IPM Essen 2019 presenting their hydrangeas in a transparent pot to show the root development.

Half finished plants - mulch on container
In May 2018, Pellens Hortensien started a trial with their half finished hydrangeas. The aim was to achieve better rooting. So, they started to apply container mulch to the top of the cultivation planters. "We reduced the amount of peat moss a bit and put this wood material as topper." After several months of testing, Pellens achieved some very satisfying and surprising results. "Besides better rooting, we saw less weeds, the plants could better handle stress (like extreme weather changes) and the phytophthora receded. On top of that, we saved 20 to 25 percent water - 'Sunday watering' isn't often needed anymore." 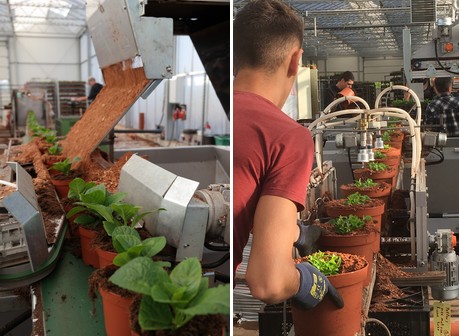 Half finished plants - challenging run-up to season
For several weeks now, Pellens Hortensien is shipping out the half finished plants to different growers in Europe. For Pellens, the sales were more or less similar to last year, but the run-up to this period was a little challenging - and not only for them, it was for many growers in Europe. According to Pellens, there were probably two reasons which contributed to this more challenging period, namely the high production especially of Dutch growers and the bigger than usual botrytis problem.

"At the IPM Essen that took place at the end of January, I heard a few Dutch growers reporting that they produced too many 14cm hydrangeas to bring them in flower. This 'overproduction' was put on the market for less than the normal price. Fortunately, it did not have an influence on our prices."

However, the bigger problem that growers had to deal with was, according to Pellens, botrytis. "Many European growers were dealing with this issue, only in the North of Germany and the EU, it seemed to be a bit less. Due to the botrytis on the plants in the cooling, many producers had to reduce their amounts - some even had to reduce it by a third."

Growers always have to deal with this problem, but the reason why it was more difficult to combat this year is according to Pellens two folded. "On the one hand, we think that the dry and warm summer last year contributed to the increased problem. On the other hand, we see that botrytis gets resistant to the medium used against botrytis. When a good new medium enters the market, everyone will use it, but after 2 to 3 years, the effect will be lost as the botrytis gets resistant against the medium.

According to Pellens, it is important that growers start considering solutions to reduce the amount of fungicide used to combat this problem. "I am currently working on trials." 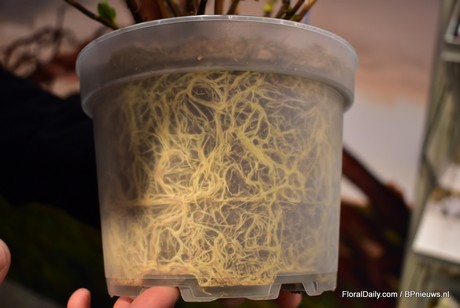 Root development in the transparent pot - after applying the container mulch.

Finished plants - bit better season so far
Besides half finished plants, Pellens also grows finished plants. "Around 20 percent of the total production are finished plants (around 200,000 - 250,000 plants)." Currently, the 20,000 m2 greenhouse in Geldern is completely filled with flowering plants and for several weeks, they are being shipped out as well. So far, Pellens is pleased with the sales. "Due to the cold weather in Europe, the demand for bedding plants has been very low. The demand for indoor hydrangeas however, has been much better. Last week, the week before Mother's Day, was very good, with satisfying prices (a bit higher than last year). Now we see the demand decreasing. It is still too cold, so people aren't going to the garden centers. It is quite usual for this time of the year and all in all, so far, the prices and demand is a bit better compared to last year."

Forecast
For the finished hydrangea sales, Pellens hopes that the weather gets warmer. But he also wishes for a bit of rain. "We need more rain, especially because I expect that we will get the dry weather like last year."