Lantana: "Bi-colors on the rise"

The lantana is a popular and well-known plant, particularly in Central Europe. Orange and yellow are the traditional and still the most important colors, but over the last years, the interest for the bi-colored ones is increasing. This is explained by Jürgen von den Driesch of Brandkamp. This German breeder put their first short growing bushy Lantana with many flowers on the market 10 years ago and named it the Tropic Lantana series. Since the introduction, they gradually introduced new varieties and this year, they will introduce two bright bi-colored ones and a new red at the FlowerTrials. 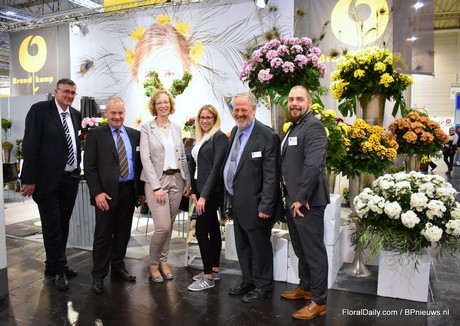 The team of Brandkamp at the IPM 2019 (Jürgen von den Driesch, second on the right)

Demand increasing year after year
Over the years, the Brandkamp has seen the demand for their Tropic Lantana series increasing and an important reason is the fact that the plants in this line are more compact compared to the regular Lantana.  "It has always been a very popular plant as it is easy to care for in the summer; after flowering, the old flowers do not have to be removed and watering every day is not necessary. Now, this smaller sized Lantana can be used for more purposes as it does not grows as large as the regular varieties anymore. Customers really value this new shape as we see the sales increasing every year," says von den Driesch.

Popular in Central Europe
The Lantana is in particular popular in Central Europe. "Lantanas have a good image as Mediterranean plants that are flowering all summer long without any problems. Additionally, Lantanas attract butterflies and bees, something that is highly appreciated by the consumers nowadays." But why aren't these plants popular in other parts of Europe? According to von den Driesch, the perception of this plant and/or the climate in these countries are the main reasons. "In South of Europe, they grow them as shrubs and Scandinavia has a long cold spring, which this cold-sensitive plant does not like. Therefore, Brandkamp's main market for Lantana's is Central Europe and it is a market in which they are continuously expanding. "Amounts are huge and the number is still increasing."

Breeding: time-consuming and complicated
The plants in Brandkamp's Tropic Lantana line are known for their special shape. "Unlike regular Lantanas, which are quite big, these plants are compact, bushy, have many early-flowering flowers and are available in 10, 11 and 12 cm pots", explains Von den Driesch. About ten years ago, they put the first Tropic Lantana on the market and added colors in the years that followed. However, adding a new variety is not as easy as it sounds. The breeding process is quite time-consuming and complicated. "The production of seed and germination is often not good. On top of that, the minimum time to trial the variety is three years. The Lantana is very sensitive to the weather conditions and it is more difficult to predict the reaction as it can be different from year to year." Therefore, Brandkamp is very pleased to introduce three novelties in this line. "Holding up the high level of the line is more important than introducing some new ones every year."

Assortment
Even thought Brandkamp considered their assortment as complete in 2016 already, they kept breeding intensively on the search for new and better varieties. "There are always characteristics that can be enhanced. So even though we have all the colors we want, we will keep investing in the breeding of this variety to make it even better." Currently, the Tropic Lantana assortment consists of 10 colors and over the years, von den Driesch has seen the demand for the bi-colored ones increasing.

Three novelties to be introduced at the FlowerTrials
At the FlowerTrials, which will be held from June 11-14. Brandkamp will introduce three novelties, namely Tropic Lantana Pitaya (red/orange), Tropic Lantana Pepper (red) and Tropic Lantana Dragonfruit (dark pink/creme). "The first two will replace Red Lory as these varieties grow much more unique, make more flowers and brighter flowers than Red Lory. The latter one, Dragonfruit, is a completely new color in our range. The color is just like that of that fruit." 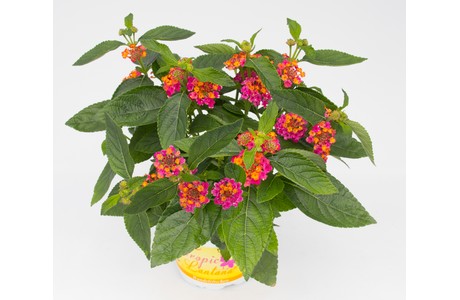 These novelties will be on display during the FlowerTrials at Green05 in Maasdijk, the Netherlands. (Click here to see what's more on display and to register for the event.)