The products in the Syngenta assortment are constantly being examined. Aim is, of course, to continuously improve the flowers. A great example of one such product is the pansy Delta series, which has been improved by more than 45% since 2012. Thus says  Product Manager Ronald Karsenbarg.

"It sometimes seems quiet around the Delta series, but in recent years we have improved and replaced more than 45% in this series", says Ronald Karsenbarg. With regard to points for improvement, the focus is on flowering time, plant habit and uniformity. "The series has become more and more uniform, the uniformity in plant habit and flowering time between the different colors is a very strong point." 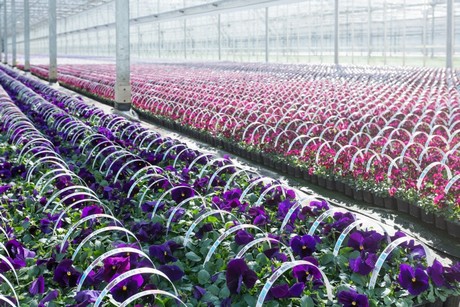 Easy in production and transport
But there are more points that breeders put at the center when improving the series. “In breeding, the focus is also on short branching, which makes this series easy to produce for the grower, while it’s less stretching during transport." On top of that, Delta violas are also suitable for the winter season. "These are the same plants, they first start to bloom in the fall and then again during spring time."

Syngenta Flowers has improvements within the Delta series annually. This year, an entirely new color is even being introduced: Delta Lavender Shades. Recently, Breeder Robbie Gieslink explained all ins and outs in an interview (read more).

Reliable
“Delta has been around for 25 years, I dare to say that it’s the most reliable series of Violas in the market. Delta will be ready in week 8, despite a dark winter. Also, they don’t ‘explode’ in extremely hot periods", says Ronald. “This makes Delta reliable throughout the year. There is a high germination, wide color range and they bloom for a long time. The Delta series has on average more flowering impact than comparable varieties. ”

For more information, take a look at www.doitdelta.nl/en