ental plants this year, a range of plant protection products (PPPs) will be screened for efficacy against rust. Some actives aim to prevent rust spores from germinating, whilst others trigger the plant’s defences, priming it for an attack.

Ornamental plants
Although there is a range of important rust pathogens, the trial will focus on heuchera as a model ornamental crop.

Heuchera rust (P. heuchera) is widespread in both the USA and East Asia. It was first reported in the UK in 2004, then at many commercial nurseries the following year. Within commercial production, if plants do not receive suitable fungicide applications, pustules form on leaves and can result in unmarketable plants. Fresh pustules tend to erupt on both young and older leaves from March to May, and then again from August to November. 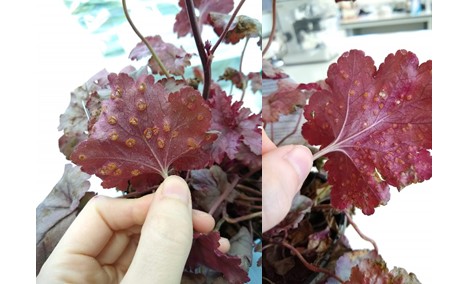 Previous AHDB-funded research indicated that any heuchera variety can succumb to rust, but certain varieties such as ‘Palace Purple’, ‘Plum Pudding’ and ‘Fire Chief’ appeared to be less prone. Whilst resistant cultivars and good hygiene on site can minimise losses to heuchera rust, growers are still heavily dependent on the strobilurin group of fungicides, and would benefit in having access to second-generation succinate dehydrogenase inhibitors (SDHIs), to create a better resistance management programme in line with fungicide resistance action committee (FRAC).

The trial is being set up at ADAS Boxworth on Heuchera ‘Key Lime Pie’, where screening of promising products will commence this August.

Plum
In an industry worth £8.6 million, plum rust (Tranzschelia discolor) is a major problem in the UK, hitting cultivars such as Victoria particularly badly. Consumer demand for known varieties often limits widespread adoption of resistant cultivars.
Where conditions for rust occur early in the season, the disease severity can overwhelm trees and premature defoliation can impact yield both in that season but also the following year, as the tree doesn’t build up the resources it would have ordinarily. Since the loss of Systhane (myclobutanil) in 2018, plum growers have not had access to any rust-specific plant protection products.

Work is underway in setting up our trial, trees have been planted (Figure 2, B and C), and the product screening will begin in late this summer when rust disease pressure is highest.