Flowers from the Westland at horse event in Germany

The Cross Country Days-Military in Ostbevern (Germany) was made more festive again this year with lilies from the Westland, offered by Van den Bos Flowerbulbs. The winner of the competition, Antonia Goldberg and her horse Rosalie, were given a bouquet of flowers by Westland city ​​councilor Cor van der Mark from De Lier, together with Baron Karl Hubertus von Beverfoerde, who organized the event. 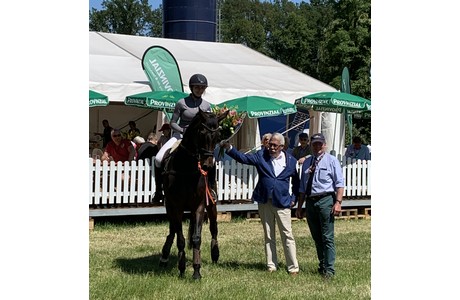 The international horse event is a yearly, two-day event that is supported by Marleen van Giesen from the Westland, who has been living in Germany for several years now. Every year she makes sure that a wide variety of fresh produce from the Westland is shown to the German public.

The event has been around since 2008 and takes place on an estate in the German town of Ostbevern. During the first day, the dressage and jumping competition take place, on the second day they have the Cross Country-Military, which is by far the most well-viewed part of the competition. The event attracts international riders and a global crowd. At this year’s event, even American and Japanese riders were present. According to Marleen van Giesen, the event will be elevated to even higher levels in 2020.