Weather has been the main challenge for the sales of most outdoor plants in Southern Europe. "In Italy, for example, we had good weather from March till half April. Then till the end of May it was quite cold and rainy and temperatures quickly shot up and doubled at the beginning of June", explains Alexandro Bock of DIEM, a hibiscus breeder and young plant supplier who also supplies finished plants in Italy and the South of France. "The weather affected the sales of many products, particularly for crops like petunia and geraniums. Fortunately, for the hibiscus sales it's still quite an okay year so far." 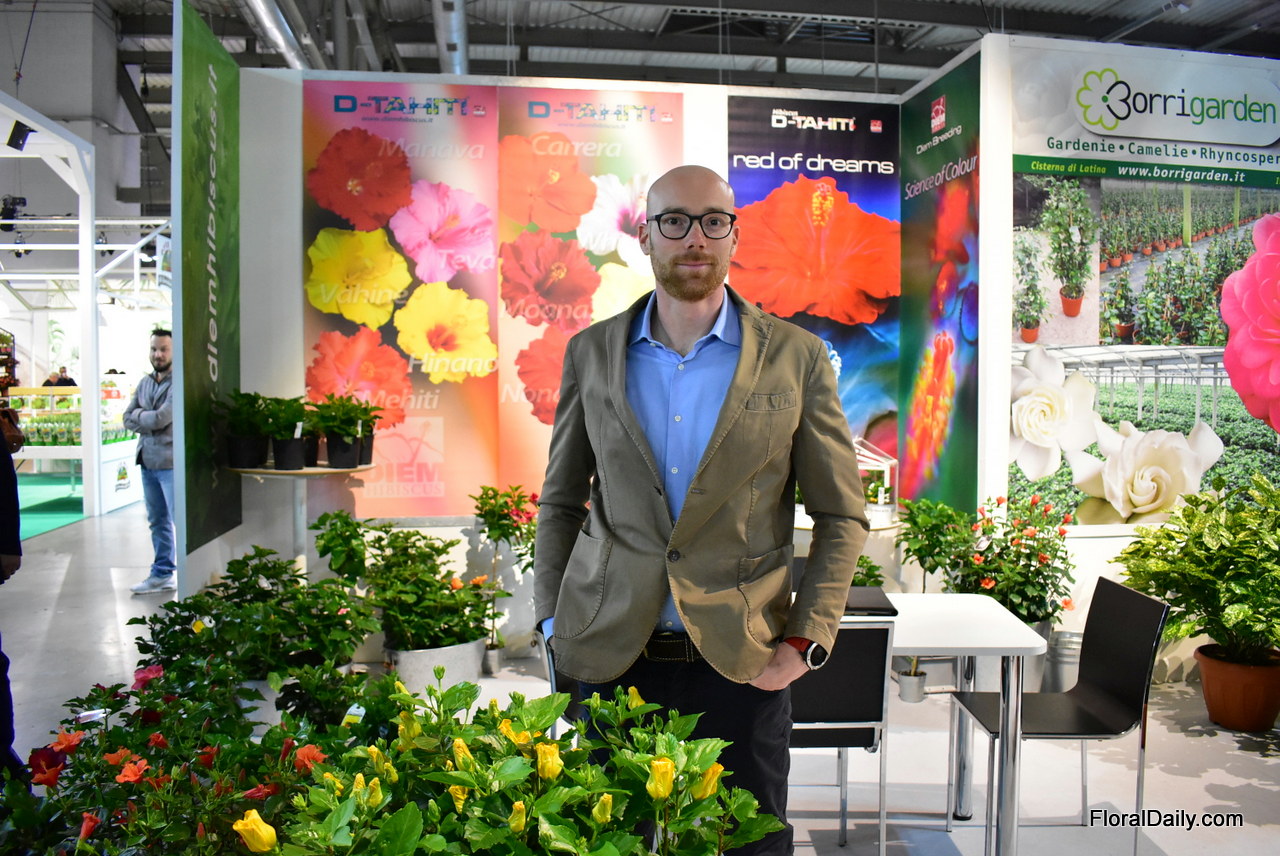 Alexandro Bock at the Myplant and Garden 2019 in Milan, Italy.

Challenging weather conditions
For Diem, the hibiscus season of finished plants runs from March till the beginning of August. They sell the plants in Italy and the South of France. When looking back at the season, Bock is quite pleased, particularly when he compares the hibiscus sales with that of other crops. "Mid-April and May was the most challenging month for most crops. The temperatures were too cold and too rainy for the time of the year, which holds back many end consumers from gardening and therefore buying plants. Then, the demand increased a bit but quickly decreased as the temperatures quickly increased, to higher-than-usual temperatures - from 15 to 32 degrees for example."

Sales affected
In turn, many growers, including DIEM, lost delivery. "Fortunately, they were able to empty their greenhouse, unlike growers of geraniums and petunias who had to throw away a lot of plants."

Also in Spain
Also in Spain, it seems to have been a more challenging year for many growers. "I heard that the sales of Sandevilla and Mandevilla was also a little more complicated than usual. People did not seem to have consumed as much as last year and also here, many geraniums and surfinias stayed in the greenhouse."

Hibiscus sales - quite OK
But why were the hibiscus sales better than expected? "It might be the fact that people are currently looking for different - and other than the usual - type of plants and it seems that they are willing to spend a little more on it."

This may also explain the good sales they've experienced during the two weeks in the run-up to the 14th of July, the national holiday in France. "It is a period where a lot of different plants are being sold. And this year, we have had very good sales."

Selection about to take off
Besides being a finished plant grower, DIEM's main activity is breeding and producing young plants. The new varieties are bred at their site in Italy, as well as where the young plants and cuttings are being produced. These products are supplied to growers situated all over Southern Europe and China. In a couple of weeks, when the finished plant season comes to an end, they will start the selection procedure of their new 2020 varieties.