How does a semi-closed glasshouse operate?

To explain the differences between a conventional and a semi-closed glasshouse, let’s have a look at how a conventional glasshouse exchanges air. In figure 1, a simple diagram explains the airflows. 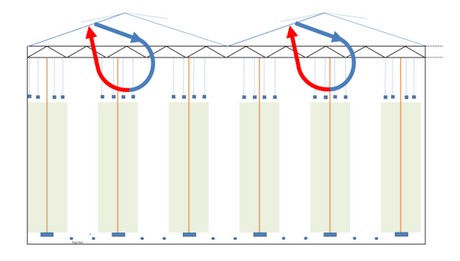 Figure 1, Airflows in a semi-closed glasshouse

The green coloured area represents a fully-grown vine crop. The rows of vines create a barrier preventing air to penetrate down low into the glasshouse. Most of the air exchange takes place above the crop at the top of the glasshouse. The many windows in the roof exchange enough air to keep the glasshouse cool on a warm summer day.

After the cool outside air enters the glasshouse it is warmed up by the sun and it leaves the glasshouse as warm air through the same vents. The temperature in this glasshouse is largely determined by the outside temperature, the rate of air exchange (vent opening and wind speed), cooling capacity of the crop and the intensity of the radiation. Glasshouses with hanging gutters achieve a better penetration as air can move through the space underneath the gutters. 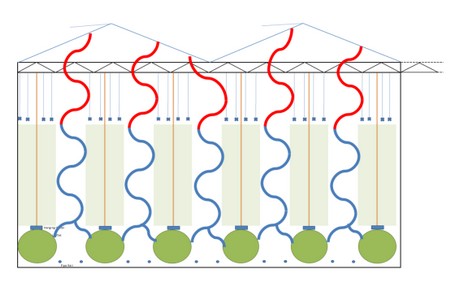 A grower can also use both options at the same time. When the air is pushed outside it is considered venting through the roof. In recirculation mode, the air is re-used, and the glasshouse operates in a “closed” mode. Hence the name “semi-closed”. The side view in figure 3 shows the airflows.

Non-circulation mode
As the air rises above the plant canopy it gets exposed to sunlight and warms up. The semi-closed glasshouse has layers of air with different temperatures. Cold air enters the glasshouse from the bottom and hot air sits at the top of the glasshouse. At the roof of the glasshouse, it can be as hot as 40-50°C. If the fan speed is too high and turbulence occurs, the hot air can be drawn down onto the crop. If despite screening and evaporative cooling the temperature still rises, the fan speed needs to be increased. In sunny conditions, the hot air may be warming up faster than what the fans can push the air out. If the fan speed is fast enough, the cooler air pushes the warm layer up faster than the sun can warm it up.

Pressurisation
Aside from superior air movement, the forced air movement and cooling, the semi-closed glasshouse provides some significant other advantages. The fans pressurise the glasshouse. This means that the vents in the roof work opposite to vents in a conventional glasshouse. Instead of scooping air in, the vents let the air out. In this process the roof vents become pressure relief valves and consequently less vents are used.

A typical glasshouse has about 400 vents per hectare, versus 80 in a semi-closed glasshouse. The positive pressure and reduced number of vents make it possible to put insect netting on the vents. The air inlet is also screened which allows for a significant lower insect pressure in the glasshouse. All crop-damaging insects, except for russet mites (and small thrips) will be screened out. The mesh size of the screen cannot be reduced to a smaller size because they would become clogged with dust particles. The positive pressure inside the glasshouse will create an airflow to the outside so that when a door opens, it is harder for small insects to fly into the glasshouse. The reduced introduction of plant attacking insects by no means completely prevents an outbreak. However, it makes it far more likely that an Integrated Pest Management (IPM) introducing beneficial insects will be successful. Screened air in and outlets changes the odds to the farmer's advantage.

The fans are never turned off, providing ample air movement at night, reducing the incidence of fungal diseases without having to heat.

This article is part of a series about growing in a semi-closed greenhouse. Read here more about no-go's for semi-closed glasshouses and cooling.