A group of Japanese scientists has discovered a new orchid species on Japan’s subtropical islands of Amami-Oshima and Tokunoshima that bears fruit without once opening its flowers. They named the new species Gastrodia amamiana.

Some plants have abandoned photosynthesis and evolved to be parasites, feeding off the hyphae of host fungi. These are known as mycoheterotrophs. They don’t photosynthesize, which means they only show themselves above ground for brief periods when fruiting or in flower. This makes it hard to find and classify them, and the true identities of many species remain a mystery. Professor Suetsugu and his colleagues are working to document these mysterious mycoheterotrophs in Japan.

This time the research team discovered a species of Gastrodia elata on Amami-Oshima and Tokunoshima islands that bears fruit without opening its flowers – they remain hard buds. After dissecting the flower, they discovered that although it resembles Gastrodia uraiensis there are differences in the structure of its petals and column. Because it does not open its flowers, the possibility of cross-fertilizing with close relatives such as G. uraiensis is extremely low, further evidence that it is a new species based on the biological species concept.

Interestingly, G. amamiana self-fertilizes in bud form without opening its flowers. Non-photosynthesizing plants often grow on the dark forest floor, an environment rarely visited by pollinators like bees and butterflies. So G. amamiana may have evolved to stop opening its flowers because the action of flower opening used up too many of the plant’s resources. We can see similar evolutionary patterns in other mycoheterotrophic plants. This suggests that when plants give up photosynthesis, it changes their relationships with other organisms such as insect pollinators. 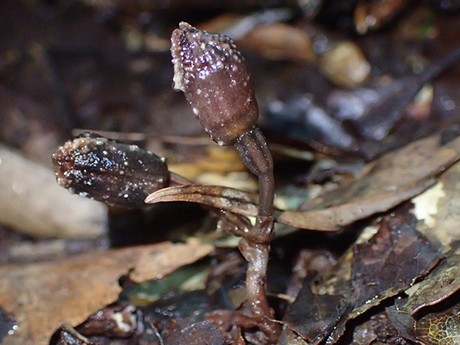 Mycoheterotrophs are parasitic lifeforms, so only stable ecosystems with resources to spare can support multiple mycoheterotrophic species. The discovery of different mycoheterotrophic species in these forests is evidence of a rich habitat beneath the forest floor, including a fungal network hidden from human view. This year Amami-Oshima has already been the location of two new mycoheterophs’ discoveries: the new species Lecanorchis moritae amamiana and the new variety Didymoplexis siamensis var. amamiana. The habitats where these plants were found are also home to many endangered species, and these discoveries are evidence of the rich ecosystems in Amami-Oshima’s forests.

However, apart from designated national parks and a few other exceptions, many of these natural habitats are becoming potential locations for logging. Tree-thinning was taking place near the discovery location of G. amamiana, and the resulting dry soil may negatively impact the habitat by drying out the fungi.

“These field surveys rely on cooperation from independent scientists, and our resources are limited, meaning that some species may reach extinction without ever being discovered by humans,” Professor Suetsugu comments. “The discovery of G. amamiana highlights the importance of the forests of Amami-Oshima. We hope that revealing these new species will draw more attention to the environmental threat faced by these regions.”