Normal life begins again from most people in September, and they spend more time at home. That’s a good incentive to brighten up the garden a bit. Most of the plants will be past their peak, but trumpet vine, spindle tree, Japanese andromeda, beautyberry and smoke tree can all bring new life to both the garden and the patio. With their eye-catching shapes and fabulous colours they represent an excellent investment in the Indian summer mood, and allow people to enjoy the pleasures of late summer. 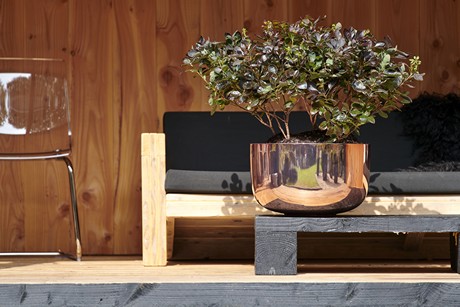 Origin
Trumpet vine originates from the United States, but now also grows widely in countries around the Mediterranean. Spindle tree occurs widely in Europe, Asia, Australia, North America and Madagascar. Japanese andromeda grows in valleys and on low mountain ranges in Japan and in the Himalayas. Beautyberry originates from central and western China. And smoke tree is native to a region that runs from south-east France through Turkey and Ukraine to the Himalayas and China.

Indian Summer plants range
Trumpet vine is a climber that flowers profusely in late summer with orange, red and yellow trumpet-shaped flowers. There are fast-growing large varieties, but a number of more compact cultivars have recently also been launched under the name ‘Summer Jazz’ which are suitable for small gardens or for placing in containers.

Spindle tree is a well-known evergreen shrub with leaves that can be variegated with white, gold or yellow. Cultivars such as 'Emerald Gaiety' and ‘Emerald 'n' Gold’ look lovely in conjunction with other Indian Summer plants. The eye-catching cultivars 'Heespierrolino', 'Blondy' and 'Harlequin' are almost white in colour.

Japanese andromeda features many cultivars which offer distinctive bud and foliage colour in September. The most common are 'Debutante', 'Cupido' and 'Forest Flame'. Notable new cultivars are 'Bolero', 'Carnaval' and 'Katsura'.

Beautyberry produces clusters of purple berries in the autumn. C. bodinieri 'Profusion' is the most common cultivar.

Smoke tree derives its decorative value from the plumes of flowers and fruit that appear to form a cloud over the plant. There are various cultivars, of which the best known is Cotinus coggygria.

Sales and display tips
In designing the display, try to avoid the pumpkin themes that creates more of an autumn mood better suited for October and November. In September it’s often still nice to spend time in the garden. Don’t just pitch the plants for an Indian Summer as creating a good view, but also as a real patio plant to enjoy outdoors. The base can be restrained: black pots, grey containers and a single shiny element create a mood of harmony and clarity that fits well with an enjoyable Indian summer in the garden.