UK: Wall of orchids opens up the wonders of Costa Rica at Eden this summer

A display of orchids is drawing Eden Project visitors into the wonders of the Costa Rica rainforest this summer.

The rugged Central American country is showcased in Eden’s new exhibition Guardians of the Future, part of the Earth Story programme running all summer. Costa Rica looks after and protects 6.5% of the world’s biodiversity.

Dr. Jo Elworthy, Director of Interpretation of the Eden Project said: “We are so happy to be working in partnership with the Costa Rica Tourism Board to tell the story of how the country has acted as a pioneer in the protection and regeneration of its natural resources.

“Costa Rica has demonstrated brilliantly that it is possible to reverse ecological loss to the benefit of its people and the planet.” 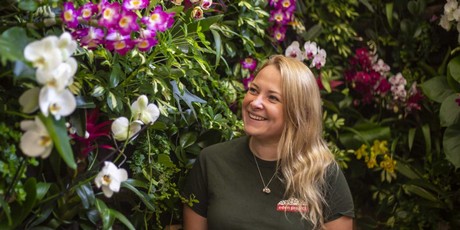 Visitors to Eden are being shown Costa Rica’s incredible landscape. Its volcanoes, national parks, cloud and rainforests and long stretches of beaches, plus its twin tropical climates of the Caribbean and Pacific, mean that it is a popular destination for tourism and wildlife.

The Orchid House in Eden’s Rainforest Biome – the largest rainforest in captivity – is a hub of information about the wonders of Costa Rica.

Here several times a day visitors can have conversations with Eden storyteller Chris Jenord about the country’s natural riches. They may be surprised to learn that while the UK has 52 species of native orchids, Costa Rica has a staggering 1,400 species crammed into its borders. The UK has 15 National Parks and Costa Rica has 29.

Perhaps the most impressive statistics of all relate to the re-establishment of the rainforest. In 1900 Costa Rica was nearly completely forested but by 1980, the forest covered just 20 per cent of the country. Today that figure stands at 52 per cent.

As part of the partnership with Costa Rica Tourism, Eden Project International Ltd - Eden’s global wing - is working with the Matambú Nature Reserve on the Nicoya Peninsula in the north-west of Costa Rica.

Here 8,601 acres of farmland was assembled more than 20 years ago and allowed to naturally regenerate into secondary growth tropical dry forest. Now it is a place where plants and wildlife can thrive and has benefitted the local community by safeguarding their water supply and the natural habitat for future generations.

David Harland, Eden Project International’s CEO, said: “We are delighted to be working in partnership with our Costa Rican friends both at Eden Project and on site at the Matambú Nature Reserve. Costa Rica has long been a leader in eco-tourism and the global environmental agenda.

“Costa Rica’s commitment to protecting the remarkable in-country biodiversity, alongside sustainable tourism makes this partnership a perfect fit for Eden and we are proud to be showcasing this wonderful country during our summer event.”