"Why make it difficult if it can be done together"

"Alone, you can go faster, but together you can get further", this was the the central statement during the fifth edition of the Tuinbouw Jongeren Topsprekeravond. Monday, September 23, more than 120 young people from the horticulture sector came together at Opti-flor at the Oberlaan to be inspired on the theme 'cooperation'. You cannot open a newspaper or watch the news these days without hearing about cooperation. 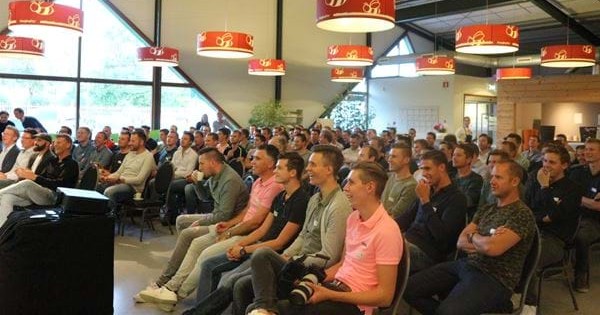 Chairman of the day Rob Veenman opened the night and asked the audience to stand up, because "are we just saying we work together as sector, or do we really work together?" It quickly became apparent that the majority of the young people think about cooperation or is already cooperating. Whether it is cooperating with your father, a growers association or another party; together we are growing fast. After the welcome speech of TJW chairman Arthur van der Meijs and a foreword by Marco Hendriks, Opti-flor, it was the turn of Tim Jenniskens and Rogier Hofman.

Tim Jenniskens and Rogier Hofman - former Olympians of the 2012 summer games - started the evening with the question 'What does cooperation mean to you?" The audience had a clear vision of what cooperation is. Having a shared goal and working towards it to realize growth.

Tim and Rogier: "To make a cooperation successful, focus is of the utmost importance. Only then, you are able to get the best out of it. Moreover, cooperation in a large group is detrimental to achieving the optimal growth potential. Only one time in my hockey career have I been able to make this optimal point with my team, while you give up your nights out, good food, and time with your family for this one moment. But if you make it, it is a magical moment."

Tim and Rogier both played the finals during the Olympic Summer Games 2012, where they won silver. "Prior to the Games, we had the goal to win gold. Only in hindsight you know winning gold should not be the ultimate goal and that it is much better to choose, for example, to score at least five times in a game as your goal. Moreover, trust is the foundation of cooperation, because if you don't trust the other, you will not achieve optimal results. It is also important to know the other persons in your team, company, or group, so you know how to react to one another. In this way, you get to learn each others strengths and weaknesses, and you will get closer to your optimal growth potential."

After the two Olympians gave their presentation, it was time for the panel discussing with the horticultural entrepreneurs: Richard Hartensveld (Schenkeveld tomaten), Robin van Dijk (Dijk van Dijk) and Rene Hendriks (Opti-flor). Using a number of statements, a few discussion points were revealed together with the young people. The audience could first give its opinion about certain subjects, after which Rob Veenman asked the questions to the panel members. All the entrepreneurs indicated that in some fields it is impossible not to cooperate. Richard Hartensveld  "Why make it difficult if it can be easy, I always say. In this way, you can use each other's strengths." Rene Hendriks added that it is important to have a joint goal to realize a good cooperation. Robin van Dijk: "Do not cooperate if you don't have it in you, that is very important." This remark justly emphasized that cooperation is not the ultimate solution for everyone. Every situation is different and that means that cooperation is not always necessary.

As conclusion, TJW chairman Arthur van der Meijs spoke out his thanks. Then it was time for drinks and snacks and talk it all over. We want to thank Opti-flor for their hospitality and the panel members for their participation. Without them, this fifth edition of the Topsprekersavond would not have been a success