Wednesday was Day 4 and the last day of the 2019 Tour de Fresh. After breakfast, the van drivers drove the riders to Huntington beach for the start of the stage before making their way to the finish line in Anaheim. Although a short last ride, it took longer than anticipated due to a few flat tires along the way! However, the riders were rewarded for four challenging days in the saddle as friends, family and colleagues welcomed them at the finish line.

Also welcoming the riders at the finish line was Cindy Jewell of California Giant. The money raised in this year's Tour de Fresh totaled $175,324 and a check was presented to Andrew Marshall, Director of the United Fresh Start Foundation. According to organizers, this will be enough for more than 50 salad bars to be placed in schools across the country. 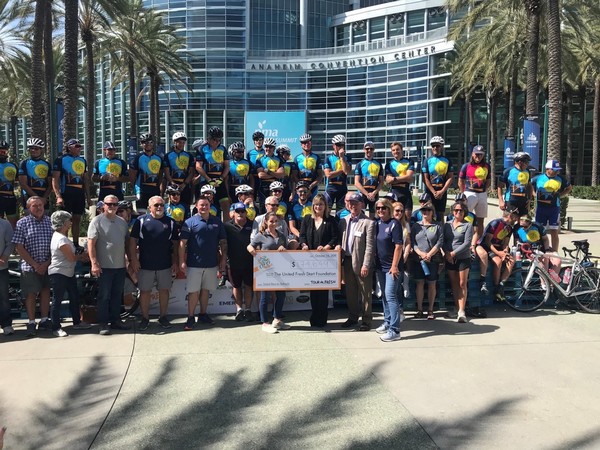 Riders, support staff and school representatives gather at the finish line at the convention center in Anaheim

The largest amount raised was by Ed and Robyn Purves with Paramount Export, who rode their tandem bike and raised a total of $34,798 together. They were followed by Charles Nelson with Mission Produce who raised $20,154 and Drew McDonald with Taylor Farms, who raised $13,137.

One of the speakers at the finish line was Ms. Terry Sperry. Sperry is the Food Services Supervisor at South Whittier School District, one of the schools that received a salad bar onsite. Tom Stenzel, President and CEO of the United Fresh Produce Association, and Senator Ling Ling Chang, 29th District Senate were also among the special guests invited to speak at the finish line. 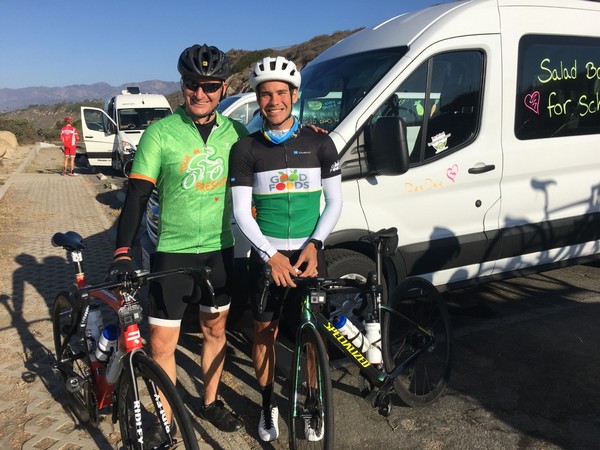 Reflecting on the ride was Daniel Cooke with Americold, who was one of the participants in this year's event. "Day 1 was the best day for me," he shared. "The views were impeccable. With 7,800 feet of elevation, there was a lot of climbing involved, but the climbs weren’t too hard. However, they were hard enough to give me a feel of accomplishment."