Kenyan and Russian delegations resolved to establish a Russia-Kenya business council to oversee the implementation of joint trade and investment programmes.

The delegations led by Presidents Uhuru Kenyatta and his Russian host Vladimir Putin met on the sidelines of the first Russia-Africa Summit in Sochi.

During the bilateral talks, the two leaders underscored the need for the business council saying it will provide a framework within which Kenya and Russia will pursue partnerships in trade, investment and development.

The Heads of State said entrenching bilateral and multilateral partnerships would help their respective countries in achieving faster progress in trade and security. 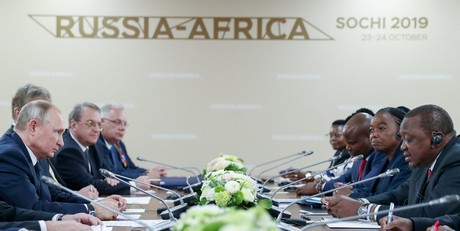 "To enhance the shared development and modernization agenda of our two countries, I consider it important to deepen people-to-people contact and our cooperation in security and defence, trade and investment, tourism, energy, culture, science and technology," President Kenyatta said.

The President said although Kenya is the second largest trading partner of Russia in Africa, the full potential of the economic cooperation remains untapped.

He said there is need to identify ways of improving trade between the two countries, which currently is in favour of Russia, with a trade deficit of 2.3 billion US dollars.

President Kenyatta said Kenya is keen on the establishment of regulatory environment that facilitate trade and investment flows and assured his host of his administration's agreement to the setting up of the business council.

He said there is need for Kenya and Russia to renegotiate the Bilateral Air Services Agreement so as to establish direct cargo flights between the two countries as a mechanism for boosting commerce between Moscow and Nairobi.

Russia mainly imports cut flowers, coffee, tea, fruits and vegetables from Kenya while cereals, iron and steel, fertilizers and paper, are the top Russian imports into the Kenyan market.

He singled out construction of affordable houses, tourist charter flight services and space technology as some of the opportunities available to Russian investors.

In the sector of energy, the President said Kenya is interested in tapping Russia’s expertise as a leader in the sustainable exploration and development of renewable energy and natural gas resources.

The President asked the Russian government to expand its scholarship programme in engineering, medicine and related sciences to benefit more Kenyans saying the strong historical ties between the two nations will be strengthened further through such exchanges.

"Russia played an unforgettable and highly valued role in Africa’s struggle for liberation and independence.

“Africa’s aspiration for freedom and liberty is enriched by the relationship with Russia. African heroes including Kenya’s founding father, Mzee Jomo Kenyatta–drew from the vision of the Soviet Union," President Kenyatta said.

President Putin recalled the historic friendly ties that exist between Kenya and Russia saying the two nations share similar values and that Russia was among the first nations to establish diplomatic relations with Kenya.

“First of all, I would like to note that the history of friendly ties between Russia and Kenya goes back to the day when Kenya gained independence, which was proclaimed by your father, former President Jomo Kenyatta.

“And a day later, diplomatic ties were established, on December 12 and December 14, 1963, accordingly,” President Putin recalled.

He expressed hope that parliaments of the two countries will continue playing a key role in the development of bilateral ties as they were the first to initiate two Russian-Kenyan meetings in 2011 and 2012.

“I hope that this cooperation between our parliaments will also continue and will create favourable conditions for the development of our relations,” the Russian President said.

To bridge the trade imbalance that exists between Nairobi and Moscow, President Putin said the two nations need to prioritise cooperation in trade and investment.

“Last year it grew only a little, but it was still 1.2 percent growth. We are glad that several Russian companies have gained a foothold in the Kenyan market,” President Putin said as he encouraged more Russian private sector actors to invest in Kenya.

On peace and security, President Putin commended Kenya for her steadfastness in the fight against terrorism and violent extremism in Eastern and the Horn of Africa region.

The Russia leader cited how Kenya swiftly and firmly dealt with the Dusit Hotel terrorist attack saying it was an indication of how effective the country's security agencies can become in dealing with emerging security threats in the country and the region.