Highest export earnings in the Netherlands due to machines, metal and ornamentals

In terms of domestic value added due to exports, the Netherlands earns the most from the export of machinery and machine parts. In 2018, the value added generated due to exports of machinery such as chip manufacturing equipment and machinery for the food processing industry amounted to almost 16 billion euros. This is nearly 4 billion euros more than in 2015. Statistics Netherlands (CBS) reports this on the basis of new figures.

Among the ten most profitable domestically manufactured export products, only natural gas generated less value added in 2018 than in 2015. Natural gas was still the second largest export product four years ago. Natural gas generated over 2 billion euros less in 2018 and is now the fourth highest-earning export product. Relative to 2015, domestic value added in exports has increased most rapidly (by nearly 4 billion euros) in the export of machinery and machine parts. Metal and metal products, high-quality plastics, dairy and processed food now rank higher than in 2015. 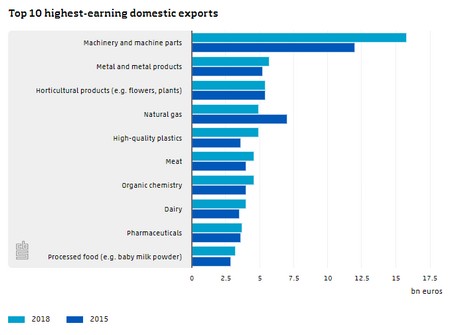 Export earnings from food and beverages 25 billion euros
Export products are put into different groups of goods. These are classified under seven main categories. According to this classification, the Netherlands receives the highest earnings from the export of food products and beverages, which is slightly more than from exports of machinery and equipment. The main category of food and beverages includes meat, dairy and food preparations, all three of them listed separately in the ranking of highest earning export products. This category further includes vegetables, cocoa products, beverages (such as beer) and preparations of fruits and vegetables.

At the level of goods categories as well, the Netherlands earned more from exports of all the various groups in 2018 relative to 2015, except in the case of mineral fuels. The latter exception is mainly due to a lower value added in exports of natural gas. 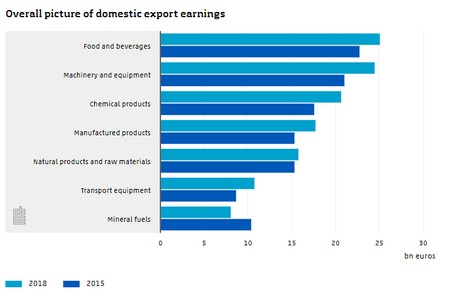