Milky Way, brought to you by Martin Vermeer and Pleun van Dijk

In a 3,500m² greenhouse of Michelle van Dijk, co-founder of the company, Mr. Pleun van Dijk, age 77, still regularly has his hands in the soil. When we dropped by, he and Martin Vermeer were busy potting a new batch of Ornithogalum. 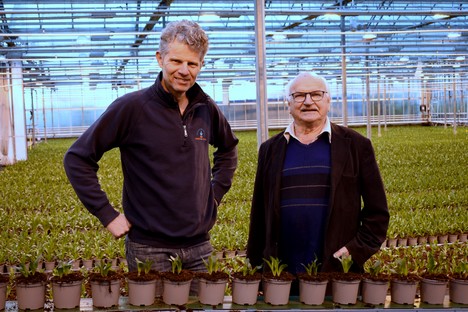 Kwekerij Michelle Van Dijk is a remarkable company. Michelle, Pleun's daughter and owner of the company, spends the summer months in Svalbard, where she manages a campsite and organizes cruises to the North Pole. In the winter months she is in the Netherlands and manages the greenhouse, but during her absence Pleun is in charge. Not because he has to, but simply because he likes to, and additionally also because a little exercise is good for the body. 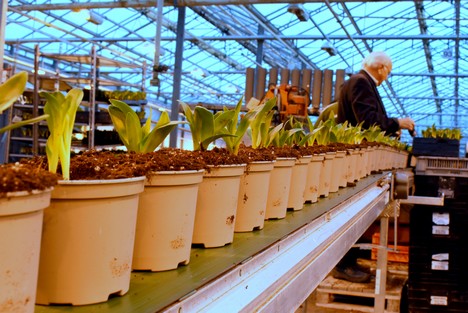 The exclusivity of the product and the small-scale nature of the company works well for him. Ornithogalum, also known as Star-of-Bethlehem, is a plant that requires instructions. The Germans refer to it as 'grower's sorrow', but the grower of course sees the challenge. The pot plant is delivered from tissue culture in the summer months, in plugs, and must then be potted. The plant material comes from Israel because, according to Pleun, it can only be obtained there at this time of the year. Delivery takes place in spring and the plant can be placed both on the windowsill and in the garden. "It is a beautiful plant with a white head, which is why we called it Milky Way." 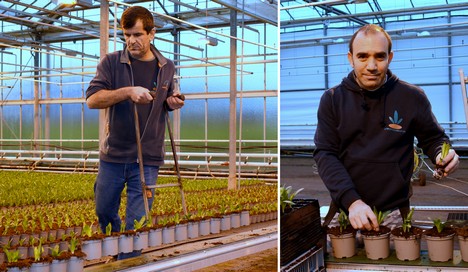 Pleun not only has had a nice career (amongst others he was chairman of Royal FloraHolland), but also the nursery has had a rich history. In 1927 Pleun's father and his brother established nursery Dijk van Dijk where they started growing grapes at the same location, in Westland region, the Netherlands. From the late twenties to the late thirties of the last century there was a good trade in grapes from Dutch soil, which mainly found their way to the UK. This came to an end when after the war road transport with trucks from France and Italy to the Netherlands became more commonplace. They brought grapes that were a lot cheaper and, thanks to the southern sun, also of better quality. "In fact, it was only then that the tomatoes entered the greenhouses in the Westland," says Pleun. 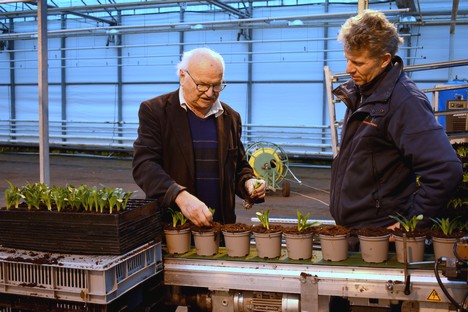 Perhaps a slightly smaller, but still considerable part of that history Martin Vermeer knows all about. From childhood horticulture was never far away. After school he went into the greenhouse industry and never really came out ever since. He started picking tomatoes and started an employment agency that supplied manpower for the tomato growers. Once more and more foreign workers arrived – nowadays Polish, Romanian and Bulgarian workers, in his days Turkish and Moroccan - he quite the agency. Finally he ended up in floriculture and started his potting company with a partner. 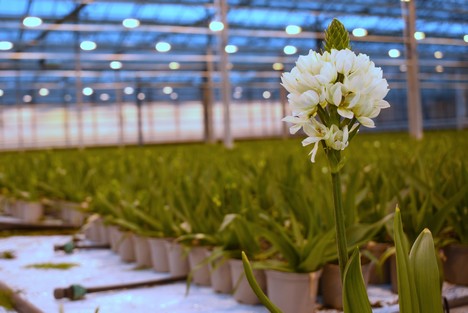 He has been coming to Kwekerij Michelle van Dijk for 20 years and also this year Martin is coming to the rescue. In the months of July up to and including February he will spend a day a week in the greenhouse at Pleun's to pot his plants. “We had really difficult years during the crisis, but now there is plenty of work again. Entrepreneurship is like soccer (in his youth Martin made it to the highest amateur levels): if you have talent, that still doesn't mean that you will make it, you also have to have the character to carry on when it gets difficult. But if the market could continue to develop this way, that of course would be nice."