It all started when looking for equipment for the new greenhouse they were building in 2017. Hugh bumped into this watering solution and the same year, they trialed it and then installed it in their entire new area. In the years that followed, they continued installing the system named 'OASIS by Control Dekk' on their existing lines with the future plan to have it installed on all lines. This is the story of annual plant grower Hugh Kurtz of Kurtz Farms in Cheshire (CT), USA. "The system is saving me a lot of time, effort and as a result money."

From manual to automated - but still labor intensive
Kurtz is currently one of the third generation owners of the greenhouse that his grandfather started in the 1940s. They grow everything from hanging baskets to pot plants and mostly supply to the New England area. Watering the plants is an important task and used to require a lot of time and knowledge. Over the years it changed, and watering became more and more automated. "Back in the days, we watered the baskets by hand, then we started using a tubing system, and finally a cable conveyor system." However, still, even with all the improvements in the watering systems, the process required a lot of labor to check then water the baskets. "We needed to check if it did its work well, as each basket received the same amount of water, regardless of the individual plant's needs. When they are in a hot spot in the greenhouse, for example, they need more water. For this reason, we still had to weigh the pots manually every day to check if they have enough or too much water."

Weight as starting point
With OASIS by Control Dekk, hand weighing is not necessary anymore as the system uses weight as a starting point. "First we had to decide how much water to put in the pot, now we program the ideal weight of a plant - which we used to guess every time by weighing it by hand." According to Kurtz, it saves him a lot of labor. "Now, we only need to make sure that the system does its job - just like a climate system."

"On top of that, usually, when the baskets need to be shipped, we often water them a little extra so that they will have enough to sustain them until retail. This we can also program in the system. So, in the morning of the departure, the picking crew has perfectly watered baskets."  Moreover, for each and every crop, the weight can be entered. "For calibrachoa and petunia, for example, different colors require different watering - the red more than the blue - and OASIS compensates for this. This, combined with the automatic rotation of the plants in the greenhouse, will create the optimal climatic circumstances to grow every single variety."

Water savings
Besides labor savings, which is according to Kurtz a hot topic as these are rising year on year in the US, OASIS also saves water. "The baskets are watered perfectly according to the plant's pre-set needs. "In the past, water poured out of the baskets when they could not uptake the amount of water that we programmed. Now, no water is being spilled and that is not only beneficial financially speaking, also environmentally speaking. It makes us feel we do the right thing." 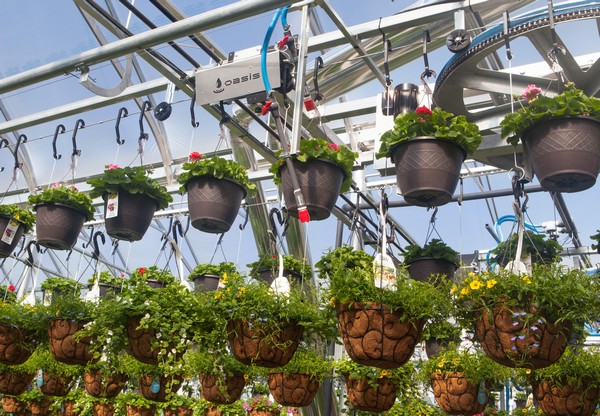 Upgrading step by step
The first OASIS was tried on an existing Boomerang line in 2018 and by the end of the year - after the trial period - Kurtz decided to also upgrade the 33 new Boomerang lines that would be installed in the newly built area. Gradually, he has continued upgrading its existing lines; last year, he installed it on 28 existing Boomerang lines and by the end of the year on 12 existing Echo lines. So, currently, 73 lines have the OASIS system installed and Kurtz is eager to continue until the entire greenhouse is covered. "All OASIS lines, I now control from touchscreen, office PC or tablet and I am looking forward to doing this with all the plants I grow."

Change in demand
Kurtz grows all kinds of annuals and over the years, he has seen the demand changing from buying bedding plants to buying pot plants. "It seems like the current generation does not want to get their hands dirty anymore."

Control Dekk - growing every year
In 2016, Control Dekk started to offer the first OASIS systems that could be installed on Echo or Boomerang basket lines. Since the introduction of this system, they have grown quickly. "Over the last 4 years, they have grown at least 2 or 3 times every year," says Len Logsdon, who together with Michigan growers and brothers Jared and Jordan Dekker of Dekker Bros created the system. Last year, OASIS systems watered over 400,000 hanging baskets and this year, they will be watering over 1,000,000 baskets. And not only in the US. Last year, they also crossed the border and have the first installation in Canada, on nine Boomerang lines. Over the years, they kept on improving and adjusting the system to the grower's needs. One of their latest developments is that the system can also be used on a FormFlex chain conveyor. "We are very excited about that".