The quality of the pollination is commonly referred to by growers as “setting”. Setting reflects how good and quick the pollen has taken to form fruit. Growers talk about good and fast setting, or poor and slow.

Poor setting can happen despite good pollination. It is important to distinguish the difference between the two, according to Godfrey Dol in his series about pollination in semi-closed greenhouses. "A bumblebee can do a good job at helping the pollen travel from anther to stigma, but hormonal processes, high temperatures, high or low humidity, can stop the pollinated flower from becoming a good quality fruit."

The setting of tomato flowers is an extremely important process. Growers will be able to recognize how the quality of tomatoes and the fruit size will be at harvesting when they look at the early stage of fruit development. If the setting is good, as is pictured above, the fruit is similar in size and properly sequenced.

If the setting is particularly good, the rapid expansion of the fruit pushes the flower away before it dries out. The picture on the right above reflects this type of fast setting. 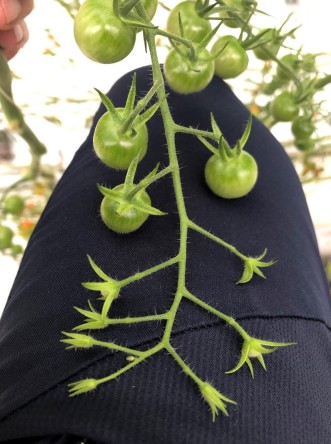 Poor Setting - Too weak
The most frequent problem with setting in cool climates is due to a lack of assimilates. If the grower kept a temperature that was too high concerning the amount of light a plant received and fruit load, the plants become too thin and there are not enough assimilates left to set fruit. An example of this is figure 5.1 for Cherry tomatoes.

Poor setting due to a lack of assimilates typifies itself by poor setting in the tips of the trusses. The fruits closest to the main stem are fine, but towards the end of the truss, there is not enough strength left to make proper fruit. This type of problem is the most common in the Netherlands because the other limitations to pollination described in the previous post rarely occur. Outside temperatures of more than 30 degrees Celsius are far and few between, as are 24-hour temperatures of 21 degrees Celsius or more.

Figure 1.1 Poor setting due to a lack of assimilates 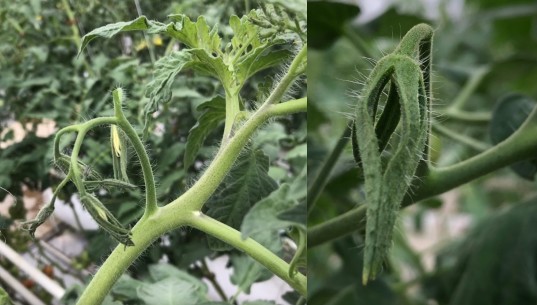 Poor Setting - Too Strong
At the other end of the spectrum, the setting can also be compromised when the plants are too strong. Figure 5.2 shows a poor setting due to vegetative growth. The green parts of the truss are so strong and stuck together that they don`t allow the flowers to open. Setting will not happen under these conditions. Sometimes, the vibrating action of a manual pollinator forces the green parts to become unstuck allowing the flowers to open.

Pollination under Lights
Glasshouse growers in cool climates are increasingly resorting to using lights to be able to produce in winter. Pollination under lights faces a complication. When the daytime is extended to 16 hours, it pays to remember that a tomato flower only opens for 8 hours.

Bumblebees do not like flying under artificial light as they have trouble navigating without ultraviolet radiation which artificial light does not supply enough of. If, for instance, artificial lighting starts at midnight and the sun rises at 8 am, the flowers will have used their 8 hour of opening time before the bees come out to pollinate. 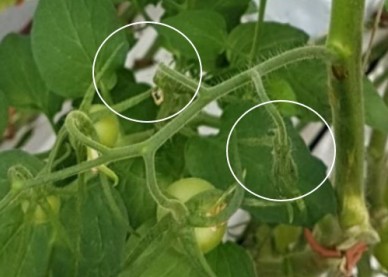 Figure 1.3 shows another example of a poor setting. This was not caused by bees not working or staff not properly vibrating. The temperature was fine, yet the fruit did not form properly. The plant seems to have skipped setting the first two fruits (fruits closest to the main stem). This is unusual as a poor setting affects the fruit at the end of the truss if it is caused by a shortage of assimilates.

Flower temperature
This type of setting malfunction is caused by a combination of high humidity deficit and elevated temperature. In conventional glasshouses in warm climates, this is typical of summer plantings. A combination of high light and low humidity forces the plant to work too hard and as a result, the setting on the first fruit is skipped. Godfrey calls this “exhaustion”.

The plant looks fine, strong, and healthy. However, the conditions in the glasshouse give the plant the impulse to transpire excessively. The plant goes into self-protection mode by skipping the fruit and focuses the assimilates on building large leaves.

It is also likely that the flower temperature plays a role in this process. Leaves can cool themselves, but flowers do not have stomata or any other means to cool themselves. The lack of fruit causes the plant to become more vegetative to which the grower often responds by removing a head leaf.

In this case, removing the head leaf may worsen the problem as it allows direct radiation to increase the flower temperature. In a semi-closed glasshouse, this type of poor setting can be found near the climate chamber because of hot dry air movements caused by momentum (see earlier posts).

This exhaustion related type of poor setting is typified by the first fruits not setting. In this case, the solution lies in a combination of reducing fan speed, more shading, more use of the cooling wall and increasing humidity.

Figure 1.4; Good setting and poor setting on the same plant. 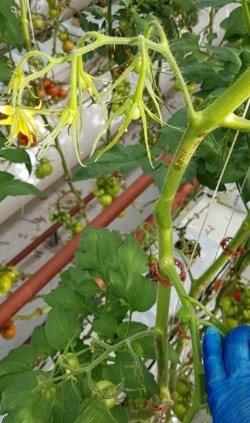 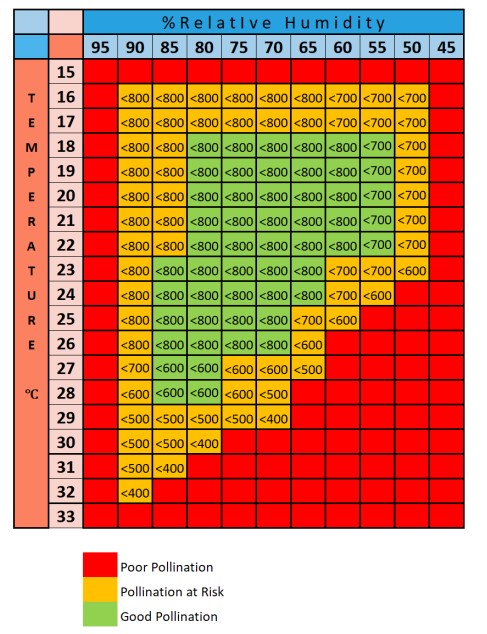 Figure 1.5; Pollination parameters for temperature, humidity, and radiation in a semi-closed glasshouse

Add to this the knowledge that flower temperature might also play a role, the influence of radiation also needs to be considered. A flower will still turn into a marketable fruit when it is pollinated at 30 degrees Celsius and 85% humidity, but only if the radiation is at an intensity of no more than 400 Watts.

The table in figure 1.5 gives a representation of what the best conditions are for pollination in a semi-closed glasshouse for large fruiting tomatoes. It includes temperature, humidity, and maximum radiation.

Of course, these are approximations and should only serve as a guideline. It implies that, in certain situations, better pollination is achieved through shading. Shading will reduce flower (and thus pollen) temperature.

Staying outside the red and orange areas in the table above will ensure that pollination and setting issues due to temperature and humidity are eliminated. At the same time, the grower must make sure the plants have enough strength but are not too strong and the climate in the glasshouse is consistent. No easy feat, but the payback is more than worth the effort, concludes Godfrey.

This article is the first in a series of three about pollination. Last year Godfrey already started with a series about growing in a semi-closed greenhouse. Read here more about no-go's for semi-closed glasshouses, cooling, the difference between semi-closed and pad and fan glasshouses and how to prevent momentum, becoming a crop to vegetative and humidity, for example in tomato. The last updates in the series were about a higher humidity at night and CO2 increases and the effect on crops.