Time to create clarity about the shading percentage of coatings

Various ways of indicating the shading provided by coatings have evolved in actual practice. This can lead to confusion. From now on Mardenkro will create clarity about this.

When ReduSol was introduced to the market, it was customary to indicate the light in the greenhouse as a percentage of the light outside. Many of the control measures in the greenhouse, for example closing the movable shading, after all are based on the sun’s radiation.

To indicate the shading provided by ReduSol, Mardenkro also adopted this tradition.

But when you indicate that the shading percentage is 60%, for example, you are talking about a gross percentage. It is the sum of the coating and all parts of the greenhouse that reflect or block light. In reality, ReduSol’s contribution is then approximately 30%.

Better light incidence
The gross percentage indication was no problem, as long as the coatings were only used for shading. However, it was not very precise either. And today, it really only causes confusion.

All greenhouse builders in recent years have done their best to improve the light incidence in the greenhouse. Different glass, larger window panes and lighter construction materials. As a result the gross shading percentage declined. The difference between light reduction in older and new greenhouses has become very large, while the coating still behaves exactly the same way. In other words, this produces a distorted picture.

Furthermore, modern coatings, such as ReduFuse or ReduFlex were not developed to shield light, but to change the light into a direction that best benefits the crop. As a side effect they provide a small percentage of shading, but when you indicate this using gross figures, this definitely gives you the wrong picture.

This is evident in actual practice as well; sometimes this leads to confusion. When making agreements or comparing products, one should really explicitly identify whether the figures provided concern gross or net shading. 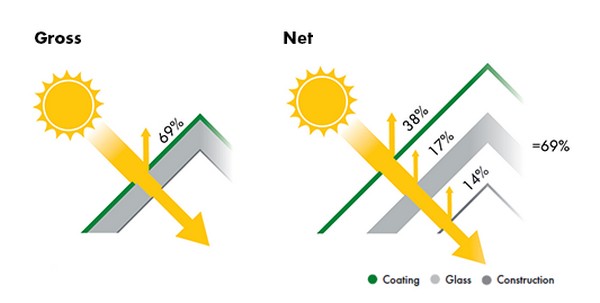 From now on, only net shading
Mardenkro wants to bring clarity to this issue and this is only possible in one way: by consistently indicating the coating’s shading using net shading.

Wageningen University & Research's Light Lab has tested all of the ReduSystems coatings. In the past, only the perpendicular transmission was measured, but today the hemispherical transmission is measured. This is the transmission percentage when light comes from all directions. After all, this is the natural situation, because the atmosphere scatters the sunlight, so that it falls on the greenhouse cover from all angles.

This is why Mardenkro decide to use net hemispherical transmission. The percentage shading of heat and light are based on this. These are very clear figures that only depend on the coating’s thickness.

Effective 2020, the company will only use this net shading percentage in all communications about ReduSystems products. Converting this into a gross figure is very simple for that matter. Add 17% to the net figure for the glass’ shading and 10 to 20% for the greenhouse structure (depending on the type and the age of the greenhouse).