Don’t be alarmed if some of your crops turn purple under LED supplemental lighting providing red and blue radiation.

From October to March, the accumulated amount of photosynthetic light that plants growing in greenhouses receive over the course of the day or the daily light integral (DLI) is generally low. Growers can estimate the DLI in their greenhouses by visiting the American Floral Endowment website and using the interactive outdoor DLI maps. Its important to remember that the DLI maps provide values recorded outdoors and DLIs within greenhouses are generally 30 to 60% lower. Now, the only appreciable way to increase the DLI in greenhouses is to use supplemental lighting (also known as photosynthetic or assimilation lighting) from either high-pressure sodium (HPS) lamps or light-emitting diodes (LEDs). Unlike low-intensity photoperiodic light (1 to 3 μmol·m–2·s–1), supplemental lighting is high-intensity lighting (Figure 1). By utilizing supplemental lighting (50 to 250 μmol·m–2·s–1 depending on the crop), you will see an increase in yields and crop quality (ie. more branches, roots, and flowers, increased stem diameter, compact growth, etc.) and reduced production time and time to flower. Therefore, growers are increasingly installing supplemental lighting in greenhouses, especially those located in northern latitudes. 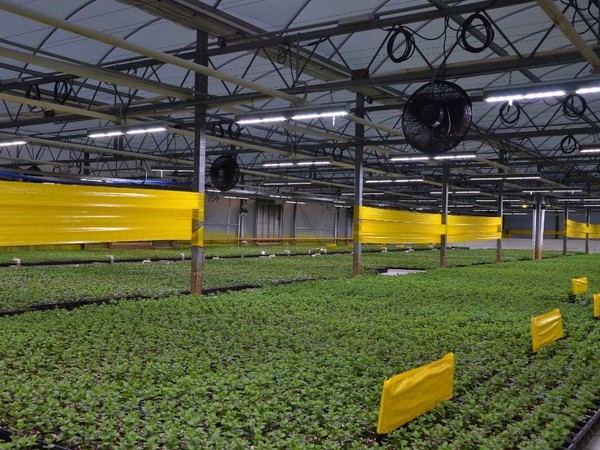 Figure 1. Mint cuttings being propagated under LED supplemental lighting fixtures providing white light. Although, white light is visually pleasing to the human eye, white LEDs are not as efficient as blue or red LEDs.

Light-emitting diodes (LEDs)
Not only are LEDs energy-efficient and long lasting compared to HPS lamps, but they are generally safer for users and the environment. There is no fragile glass envelope that can break, extremely high temperatures, or hazardous chemicals such as mercury. Unlike HPS lamps, they can also be placed close to plants as they do not emit radiant heat (although LEDs do produce heat). 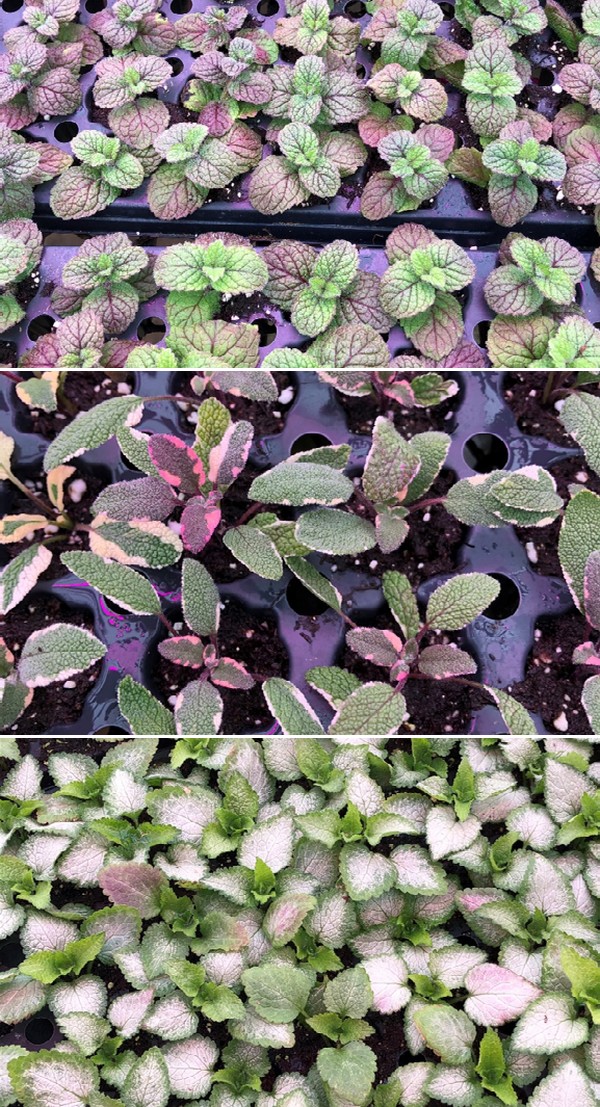 Growers can now purchase horticultural LED fixtures that provide either a specific wavelength of light (narrow band) such as red or blue radiation or a broad range of colors (broad band) that appear white. For more information about the difference between fixtures that contain narrow and Figure 2. Mint, sage, and lamium cuttings being propagated under LED supplemental lighting providing blue and red radiation. 2LED supplemental lighting providing red and blue radiation = purple leaves on some young plants broad band LEDs, read Erik Runkle’s article ‘Purple vs. Pink vs. White LED Fixtures’. Over the past year, several growers have indicated the leaves of some crops they are propagating as unrooted cuttings under LED fixtures providing blue and red radiation turn purple (Figure 2). The concern is that there is a phosphorus deficiency or leaf scorch from the supplemental lighting. 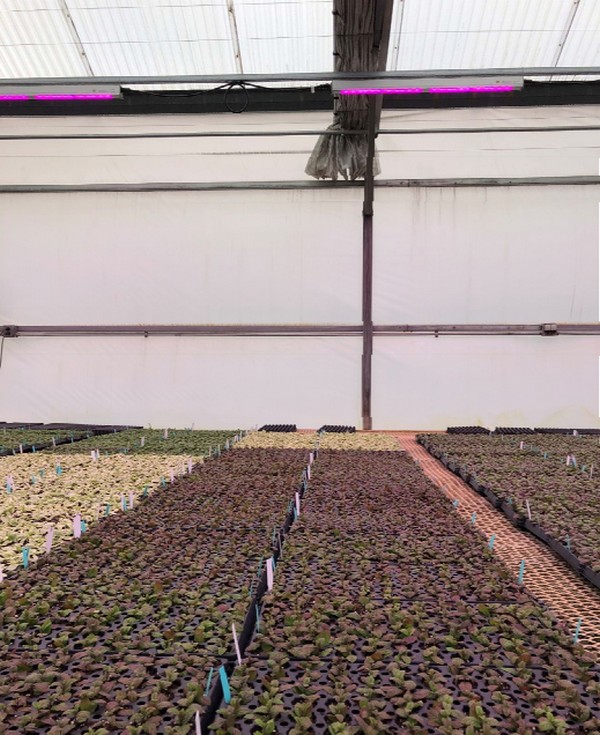 Figure 3. Propagation of unrooted cuttings of annuals, herbs and perennials under LED supplemental lighting providing red and blue radiation. Under low solar radiation in the winter, some genera such as these mint cuttings accumulate anthocyanins as a result of the high red and blue radiation provided by the LED supplemental lighting fixtures. Once the plants are moved to another environment, the leaves should turn green.

Why do leaves turn purple?
Most LED fixtures that appear purple to the human eye typically provide anywhere from 75 to 95% red and 5 to 25% blue radiation. Anthocyanins are plant pigments that are responsible for the bright red, burgundy, and purple colors that help sell our plants. Environmental and cultural factors and stresses such as light quality (ultraviolet, blue, and red radiation) and quantity, low temperatures, nutrient deficiencies (phosphorus), drought, high salinity, carbohydrate status, and plant growth regulators can contribute to anthocyanin accumulation and the appearance of red, burgundy, and purple leaves. Leaves with increased anthocyanin concentrations such as those in Figure 3 may have higher, equivalent, or lower photosynthetic rates than green leaves. It is all dependent on the species and your environmental growing conditions. So don’t worry that these cuttings will have less vigor than cuttings with green foliage. 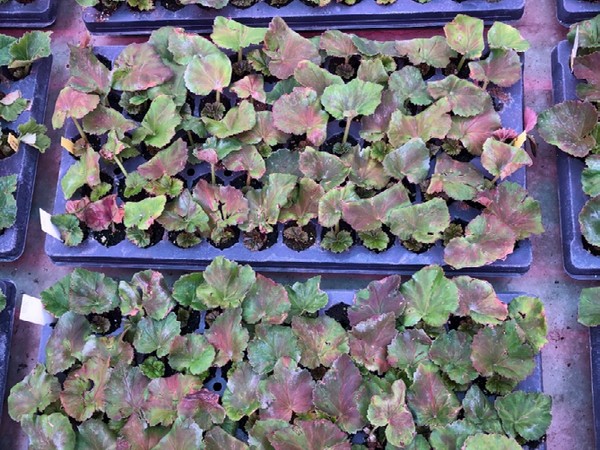 Our main goal as propagators is to quickly induce callus formation and then stimulate rooting with free sun light and supplemental lighting if necessary. So why do unrooted cuttings of certain species such as the begonia in Figure 4 accumulate anthocyanins under LED supplemental lighting providing blue and red radiation? It is well known that environmental and cultural stresses can cause short-term anthocyanin accumulation in young developing leaves. From harvest to shipping to stick, unrooted cutting experience some sort of stress (ie. carbohydrate loss) which is made visible by the red and blue radiation from LED supplemental lighting. 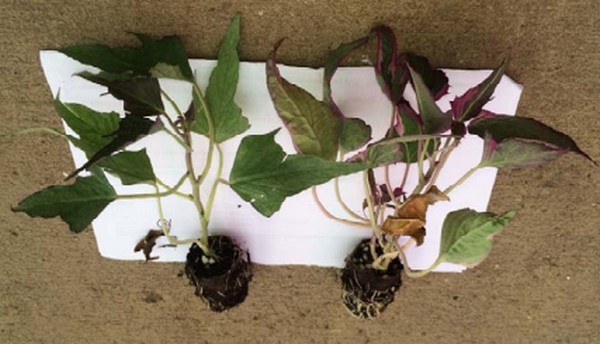 For species such as this sweet potato vine that naturally have burgundy and purple foliage, LED supplemental lighting will further increase foliage color under low solar radiation (Figure 5).