Bogus market reports abound, but the good stuff is out there

Suppose you're looking for news about aquaponics. The logical thing to do would be to fire up Google News, and typing aquaponics into the search field. You'll then end up with something like this: 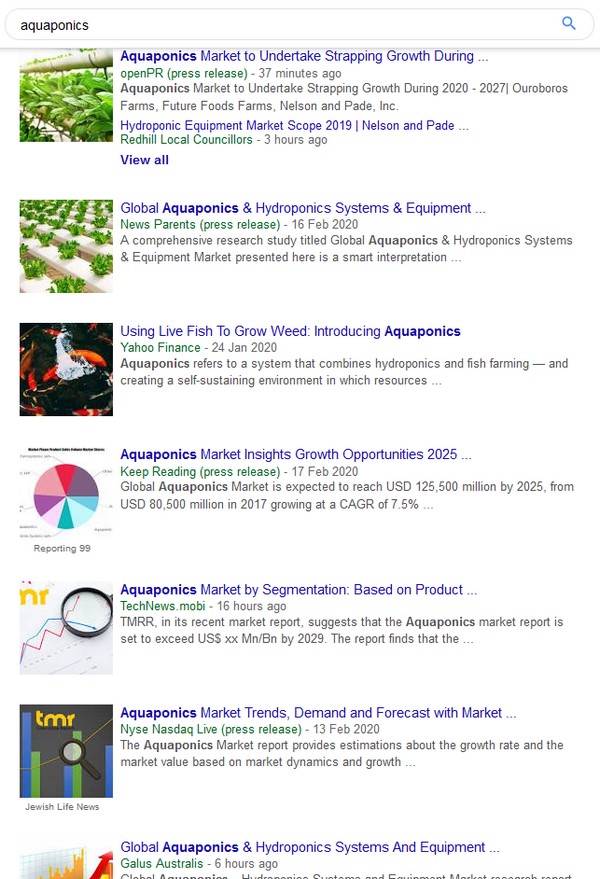 Very informative, right? Lots of mentions of big players in the market, percentages and growth figures that look trustworthy... but alas, it's all part of one big ploy to get you to part with your money. We wrote about it before (see this article), but since these scams keep reappearing, we want to warn our readers again.

And don't just take our word for it, others have taken note too. IPVM wrote an informative feature article about the subject which you can read here (the comments below the article are also very enlightening). They did several follow-ups, including this one that warns journalists against referring to these bogus reports, and an analysis that shows the growth rates predicted in most of those reports are insane. Finally, there's this noteworthy response from someone who worked at a firm that churns out sham reports. For more reading material, also featuring a host of informative comments, check out this article at Opinion.org and this writeup by a genealogist.

Now, it's all well and good to know what's not trustworthy, but how are you supposed to find reliable information on market developments in the industry? Fortunately, there are several sources to turn to.

"We want this industry to thrive"
One of those sources is the Global Ag Report (previously known as the State of Indoor Farming), published annually by Artemis. "We believe the most credible source for determining how the industry is growing is farmers themselves", Allison Kopf, founder and CEO of Artemis, explains. 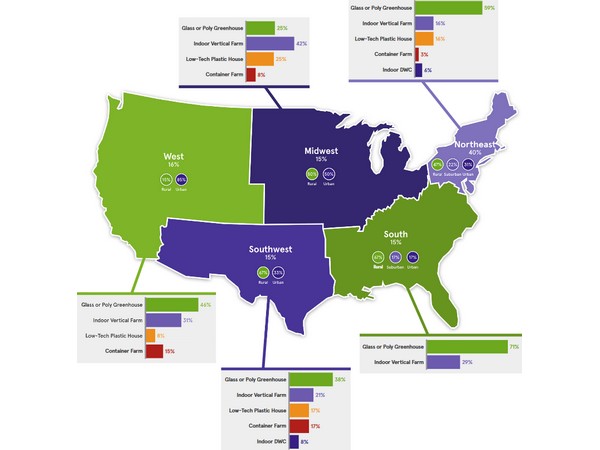 A chart from the 2017 State of Indoor Farming report

They built the State of Indoor Farming reports to look at the emerging trends, challenges, and benefits of farming indoors - in other words, the impetus for these reports came from within the industry itself. As Allison further explains, the process of creating a valuable report can be complicated.

"In order to get a complete picture of the industry, we created a comprehensive survey and sent it to farmers in both our direct network as well as partner networks (as to not be too biased toward our own customer base). For each survey, we received over 150 responses from confirmed farming operations. To confirm these were statistically valid responses, we had to verify each individual operation to confirm it met the response criteria. We did not allow consultants to answer or technology companies, for example, as our report was focused exclusively on farming operations. We then had our data science team analyze all results to create anonymous trend and benchmark data, we interviewed a number of respondents for qualitative follow up, and supplemented the report with publicly available datasets from the USDA and university research."

A remarkable decision was to offer the reports for free, which goes against the grain of the report factories mentioned in our introduction. "We want this industry to thrive and we believe charging for this information after farmers volunteered their time to participate would be a mistake", Allison explains.

Proper research takes time
As we saw, a lot of work goes into making a thorough market analysis. Frank de Hek, partner at Oaklins Netherlands and in charge of the horticulture and private equity teams, concurs. "The future is extremely difficult to predict, and making an informed forecast takes a great deal of time", he says. He points out that in many reports like the ones mentioned in the beginning of this article, growth percentages are merely extrapolated based on data from the last few years, with some changes to make things look scientific.

"Well-informed forecasts are produced by governments and industry associations, and to some extent also by renowned strategy consultants like BCG, McKinsey and Bain." Those consulting firms gather data by talking to a lot of industry experts, which Frank also does. "You need to be immersed in the matter in order to produce a proper report. I'm not going to write a report on the medical market, for instance, after having spoken to just a few people."

He further notes that the Indian research firms that produce bogus reports are not too interested in quality. "They have a short-term vision due to a lack of returning clients. It's totally different with government organizations and industry associations. The renowned strategy consultants also have a reputation to live up to, as do I. I write such reports to get my name out there and to get new clients, and that can only be done through high-quality reports." 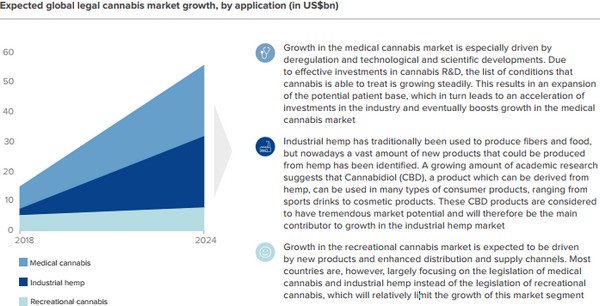 A graph from an Oaklins report on the global cannabis market, showing expected growth in various segments

Frank then goes into detail regarding the effort he puts into a report. "To begin with, I have affinity with the market I write about. I also talk to a lot of people in the industry, and then I start gathering information, separating what's relevant and what's not. Next, I'll analyze all sorts of data, combine it with what I've read about the subject, what I've been told by people and what I think based on my industry expertise. I then start writing, and I have several people read the draft version to get feedback before publication. The whole process can take half a year to complete."

Back to the sources
Good research is built on solid sources. When you only use publicly available press releases, you will end up with a bit of a rickety structure for your report. So what's the right way to go about it then?

Jan Kees Boon of Fruit and Vegetable Facts has many years of experience compiling data from a variety of sources to create his fact sheets on the fresh produce industry. "What I do is a specific type of market research: desk research. That means I look at (semi-public) statistical data and make an analysis, based on those figures and the knowledge that I have", he explains.

Because it's very hard to be a jack-of-all-trades, Jan Kees specializes in import and export data. "I check figures as much as possible, for instance by comparing what country A says about the import from country B, and vice versa, what country B reports it exports to country A. The data usually comes from customs, or the statistical service of a country."

Through experience, Jan Kees has gotten a feel for which sources are reliable, and which not so much. This in-depth knowledge, again, comes from specialization. "I pretty much exclusively deal with fresh fruit and vegetables, and only sometimes I write about other markets, like processed produce or ornamental crops."

Reliable reports
Fortunately, it's not that hard to find market reports that you can actually rely on. In addition to the ones already mentioned above, there are plenty of other sources of information you can use.

And that's just the tip of the iceberg. There's plenty of good material out there to help you figure out the current state of the market, so be sure to make use of the good stuff. But if you see something with crazy CAGR rates predicting what the market will be like in five years... run fast, run far.