J Schwanke’s Life in Bloom is a half-hour lifestyle series that’s all about flowers, and the positive impact they make on daily life. The show has been airing on public television station (PBS) nationwide in the U.S. market since April of 2019. The show included visits to 9 flower, foliage, or plant farms – six located in California, two in Florida, and one in Michigan. 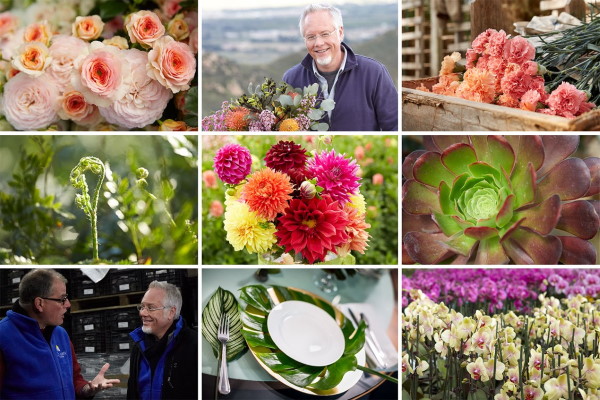 “Research has shown the presence of flowers has an immediate impact on people’s health and happiness – we, in the flower industry, know this, but maybe forget to communicate it as much as we could,” says J Schwanke. “It’s been my life-long mission to show the public at large, how easy it is to improve their daily lives, by including flowers. Personally, I absolutely love to visit flower farms and now, with the tv show, I’ve been able to take viewers with me (the show reaches 98 million homes in the U.S.) – so they can enjoy not only the incredible beauty, but also tell the farmers’ stories so viewers can appreciate the hard work and dedication involved in growing flowers, foliage, and plants.”

Flower farms are showcased almost right out of the gate, with a visit to Resendiz Brothers Protea Growers in the second episode. Rose grower Eufloria Flowers spotlights their garden roses, on a visit to their greenhouses in Nipomo, CA. J also visits industry icon Lane DeVries, Sun Valley Floral Farms, at his Arcata, CA operation.

“We may, or may not, have toured all of the coolers needed to prepare the bulbs, in order for Sun Valley to grow Tulips 365, 24/7. Lane is dedicated to flowers – and as a farmer his knowledge of what it takes to grow them successfully, is deep - it’s the bulbs, it’s the soil, it’s the weather – his passion is evident,” says Schwanke.

Plants, blooming and otherwise are also included. Westerlay Orchids and Succulent Gardens, both in California, as well, reveal what it takes to grow and care for a multitude of orchids and succulents – taking months and even years to bring to market.

Since production for television includes long lead times, J notes they were lucky to learn firsthand, the process of growing Dahlias – and harvesting the tubers – at a farm in Michigan, as the grower retired in the year following filming. Akiyama Nursery – a California Carnation grower – was another timely visit, as they transitioned to growing hops. The segment gives a glimpse into the challenges they faced, along with undeniable joy, inherent in growing Carnations.

Foliage also plays a huge role in “living a flower life” as Schwanke sees it. As evidence, one episode is dedicated to foliage, and includes visits to FernTrust and Alpha Farm. Both farms are located in the fern capital of the world Apopka, Florida. The episode also includes all foliage arrangements and foliage for place setting accents.

“Viewers of season one have responded so positively to the beauty and relaxation flowers provide –our show provides a break in their day, to escape and destress even for just a few minutes,” says Schwanke. “I’m excited for season two as we continue to emphasize the benefits of flowers – which improve our surroundings, mood, and even physical well-being.”

All thirteen season one episodes (presented by WKAR and distributed by American Public Television) continue to be broadcast on public television and Create TV stations, nationwide, check local listings in the U.S.. J Schwanke’s Life in Bloom also streams for free online at www.uBloom.com/LifeInBloom. Outside the U.S., apps such as www.tunnelbear.com, can provide access.