Growers have already reported dumping hundreds of thousands of dollars worth of flowers during lockdown, but the industry warns worse may be yet to come. New Zealand Flower Exporters Association chairman Mike Desmond said uncertainty in overseas markets meant the problems were sure to continue long after lockdown eased.

"With an estimated 50 per cent of locally produced flowers heading overseas the impact could be 'horrendous'", he said. He said that it may not be until borders opened to overseas tourist that freight prices will drop low enough to make exporting worthwhile. "There is light at the end of the tunnel and we have faith in our resilience. We will find a way, but we don't know the way yet," Desmond said.

Wairarapa grower Theo Van der Put, who grows gladioli and freesia for the domestic market, estimated his business had already lost around $150,000 worth of harvest from March alone. "For the lockdown to come right at the peak time really sucked." They were pinning their hopes on an upswing in demand in level three and then level two a fortnight later. 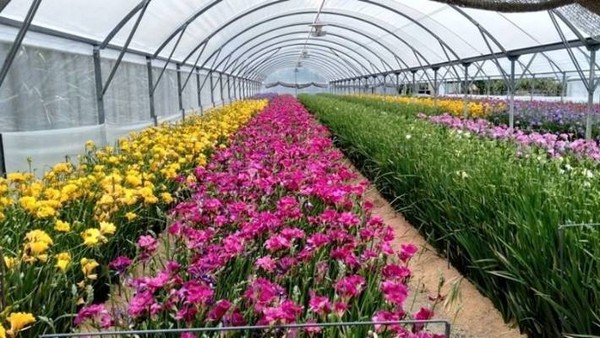 "It's going to be very tough, but my gut feeling has been all the way through that there will still be a big demand for flowers," Van der Put said. He expected that there would be weddings, funerals and people just wanting to express their love with flowers soon after the covid crisis was brought under control. "Mother's Day is huge for us. We plant for Mother's Day, we aim for it and we are hoping to be able to do a fair bit of business."

A Northland orchid grower, who did not want to be named, said his business was in a "very, very dire" situation and he was not sure he would survive into the next financial year. "If us growers can't get through it, then we have to consider just closing the doors because you're dealing with a living organism, you can't just start back up." He said the Government's decision to push back relaxation of level four to level three means they may now have missed an opportunity to get flowers ready and distributed in time for Mother's Day on May 10. "Our market is predominantly an export market. We supply the rest of the world in their off season."

Thanking the 'essentials'
When Wairarapa flower producers Theo and Elsa Van der Put delivered a trailer load of gladioli and freesias to Wairarapa Hospital, they weren't quite prepared for how much joy this simple gesture would bring. "Everybody was so excited and so happy. Even now we're still getting lots of emails and thank yous," Theo said

Growing flowers just north of Greytown for the last 16 years, this is usually the busy period for the Van der Put family. Instead, the coronavirus has cost them dearly in lost sales, with people unable to buy domestically during the lockdown and the export market shrinking to nothing.

Instead of selling the flowers, the Van der Put's donated 600 bunches of gladioli and 1500 bunches of freesias to district health board staff across Wairarapa. "The Van der Puts made many people happy yesterday. And we know we are not the only people they are getting their market-less flowers out to, thinking of others in their hard times," DHB spokeswoman said.