Online B2B flower platform thrives in the midst of COVID-19

“Since the pandemic, our turnover has increased and is now up by 600%", says Wilfred de Wit, CEO at iBuyFlowers.com, a New York based online B2B fresh flowers platform. At the beginning of the COVID-19 crisis, around March 12, their turnover dropped significantly, but quickly after, it started to increase. "As the traditional wholesalers were not available, many florists and event planners here in the US turned to direct ordering from the farms, via our platform." 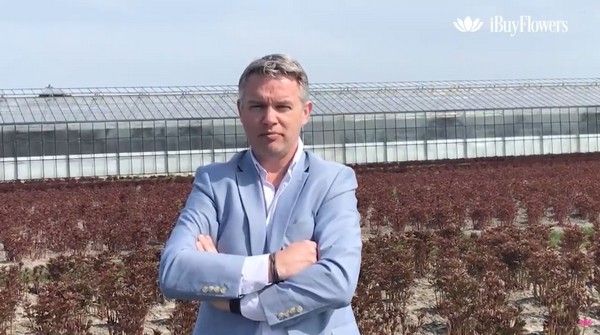 Direct from the grower
iBuyFlowers.com was set up by De Wit in 2016. After owning a farm in Ecuador for several years and spending more and more time in connecting growers, wholesalers and florists, this Dutchman saw an opportunity to create a platform that connects florists directly with the grower. So, he searched for investors in the Netherlands and started a pilot project in 2016, and officially launched it in 2017. They have grown from 20 florists, wedding and event planners to 1000+ in the last years, and supply more than 4000 flowers and 250 types of pre-assembled bouquets from more than 40 growers from Ecuador, Colombia, Costa Rica, United States and the Netherlands.

This platform provides flowers direct from the growers and enables their clients to order all kinds of flowers in all kinds of amounts online, which are then delivered (5 days a week, via FedEx) directly to their doorstep, within 4 days - which is on average 6 days shorter than via a wholesaler.

Growing in the COVID-19 crisis
When the COVID-19 crisis hit the US, demand for flowers dropped significantly, also for iBuyFlowers.com. "On March 12, I think it was, turnover fell dramatically." But what happened afterwards resulted in an increase in demand and increase in users of their platform. De Wit: "What we saw in Miami is that importing wholesalers had to close their doors, which also resulted in a challenging situation for the trucking companies, not knowing if they should or could remain open. However, many florists were still open, but due to this situation, they could not source their products and had to turn to direct delivery, like our platform offers. And as we deliver via FedEx, we were able to continue supplying our clients."

In the weeks after the start of the COVID-19 crisis, they increased turnover by around 100% per week, resulting in a 600% growth in turnover at the moment. "Even though the demand from florists for flowers in general is 40% lower compared to last year and the purchase price of flowers is lower as well, our turnover even doubled compared with last year." Every day, the platform welcomes 10 to 15 new buyers, and last week, they had their best week ever. “It feels a bit ambivalent, I must admit, to be growing this rapidly in these times. We’re happy we can provide a solution to our customers and growers to keep their business going."

Industry becomes more innovative
As not all florist shops were allowed to stay open, innovative ideas arose to still bring flowers to the consumers. "Besides online, phone ordering and contactless payments, we've also seen several switching to curbside deliveries, limiting access to their store or putting in place drive-through flower stations - sometimes even out of their garage. As FedEx can deliver to anyone's doorstep, they can also deliver to a florist's home, for example, as they also work with contactless delivery."

More demand for pre-assembled bouquets
Linked to the increase in the innovative ideas mentioned above, De Wit also sees an increase in demand for pre-assembled bouquets. "When florists are not at their shops, they do not have the tools and/or staff to make bouquets, so many started to order pre-made bouquets." Also these bouquets come directly from the farm. "Some of our farms offer pre-made bouquets, and we now have 250 types to choose from."

For Easter, De Wit already saw an increase in these pre-assembled bouquets, but now in the run-up to Mother's Day (May 10), the demand is very high.

Decreasing assortment
On the other side, the grower's side, De Wit sees that growers are discarding the non-profitable varieties. "In the past, growers would still have a variety in the ground that was demanded only on special occasions, but now, all these varieties are being thrown away." As a result, the grower's assortment will decrease.

Run-up to Mother's Day
Today and Wednesday, the last large shipments will leave the Netherlands, and the last large shipment out of South America will leave today. Even though demand is 40% less compared to last year, demand is still higher. However, the run-up was a lot more challenging this year. "With FedEx, we also have to make a prediction of the shipments 4-6 weeks in advance. So, when we were at our lowest point, I had to make a prediction." But he took the gamble and ordered an amount he, at that time, did not dare to dream of. "I thought: B2C sales will increase, and when the complete chain will come to a standstill, there needs to be an advantage for us somewhere." And fortunately, it seemed to be the case, but it was not all a matter of course. "We've set up a complete marketing team and invested a lot in sending out the message that we still deliver and can deliver according to all social distance regulations."

One of their marketing campaigns. This video was shared on several social media channels and received over 30,000 views.

Demand after Mother's Day
Mother's Day is the final large flower holiday before the summer season, which is often characterized as the low season. What will happen after? De Wit: "In the week after, we usually see a drop in demand, and I also expect it this year. However, afterwards, I expect it to pick up again as the weekly orders will come in. And if the COVID-19 regulations continue as they are now, I expect that we will grow rapidly. In general, due to the high unemployment in the country, the demand for flowers, a luxury item, will decrease. And as many large wholesalers are already having difficulties - one large wholesaler just filed for bankruptcy - more flowers will be sourced directly."

Will florists also source direct from the farm, avoiding a platform like iBuyFlowers? "We see more and more growers supplying direct, but as a grower, it is difficult to supply a broad assortment. A florist wants all kind of flowers and often in smaller amounts, and that is more difficult for a grower who grows several items. And on top of that, also growers are facing challenging times. So, investing in marketing campaigns will not always be that financially feasible.