On Wednesday, April 29, and after several weeks of preparation, LATAM Airlines Ecuador carried out its first seat containers flight to Miami. The utilization of passenger aircraft for cargo transportation in its cabin allows the company to continue supporting its clients’ exports and imports and to mitigate the negative effects COVID-19’s restrictions have had on its operation.

This project was especially challenging for LATAM Ecuador’s team. Even though Chile and Peru had already carried this out, a team in Ecuador, composed of more than 25 people (from operations, maintenance, safety, airport, crew and cargo areas), studied the logistics during several weeks. This way, after intensive work, 38.5 tons were loaded on and in between the seats, in the hand luggage compartments and in the airplane’s belly. The flowers were placed in the cabin (5.5 tons), and the remaining 33 tons (seeds and salmon) were placed in the belly. 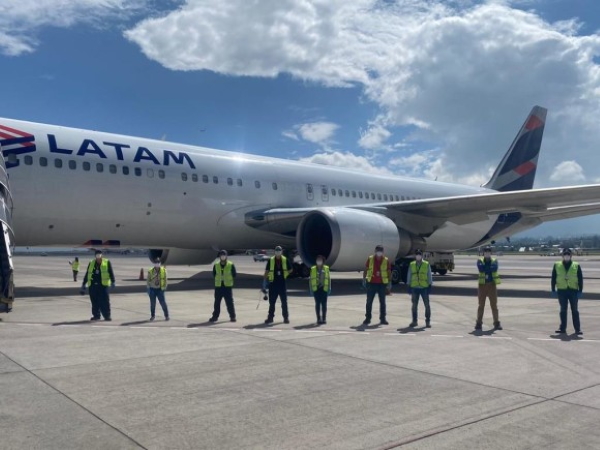 “The efforts we are making at LATAM in order to keep going are impressive. Even though our capacity has been restricted, we are working intensively to mitigate these effects. We have maximized the use of our freighter fleet, quickly modified our itineraries and started utilizing our passenger aircraft exclusively for cargo transportation. We are transporting products from Ecuador to the world, which benefits the country’s economy and thousands of people that depend on these products reaching their destination. We transport dreams and our own is to not give up and continue flying to support Ecuador”, said Daniel Leng, LATAM Airlines Ecuador’s Executive Director.

On the other hand, captain Carlos Eguez—LATAM Airlines Ecuador’s Operations Director—mentioned that the 5.5 tons introduced in Boeing 767’s passenger cabin were loaded under all the safety measures required by this Quito-Miami flight. Additionally, he acknowledged that this flight was very innovative for the company “Not long ago, we transported passengers in our cabins, but in light of the crisis the industry is experiencing and the country’s needs, we have converted our passenger airplanes into exclusive cargo transportation airplanes”, he mentioned.

As in most other countries, Ecuador’s export and import markets have been affected. Exports have decreased by 70% as of mid-March (weeks prior to COVID-19’s effects), and US and European markets have been the most affected. However, the country’s export trend still remains. Flowers continue to be Ecuador’s main export commodity (90%), followed by balsa wood (5%) and pitahaya (5%).

Meanwhile, the main products entering the country are manufactured goods and medicines. However, a downward trend near 50%–compared to the same period in 2019—has been revealed as a consequence of COVID-19’s international effects.

Following the measures taken by governments due to the health crisis, LATAM Airlines Ecuador’s operation remains part of the 95% passenger flight suspension that LATAM Airlines Group announced on April 17, 2020. This also comes in response to the travel restrictions and the unprecedented drop in demand caused by COVID-19.