“Every basket was identical”

“One of the first things that appealed to me was watering by weight,” Zach Smith says of OASIS. At Hood’s Gardens in Noblesville, Indiana, where Zach is operations manager, they grow a lot of different baskets, sometimes on the same line, and they have them double hung, with a different size on top and plants underneath too.

They brought in the OASIS system and turned two crops with it their first season.

They won’t stop there. “The baskets are absolutely beautiful and noticeably nice, stunning. You’ll see a noticeable difference in your crop guaranteed,” says Zach. 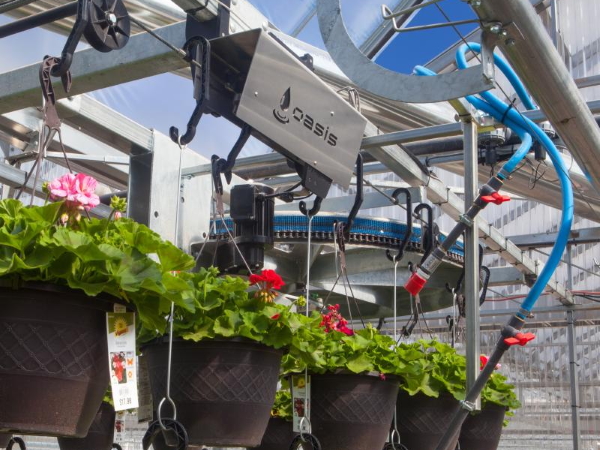 Hood’s started with a trailing viola mix in their pansy house, and reports that every one of them was identical. With about 7 acres under cover, they’re well versed in baskets, producing a Spring Mix (a random mix of three to five annuals) and putting a 10 inch on the top of the line and a 12 inch on the bottom. Also in their repertoire: 14 inch moss, 13 inch fancy container, calibrachoas, begonias, petunias, Boston ferns and more.

“Especially when we’re using mixed crops, with the OASIS we can throw different crops on the same line,” Zach explains. “It’s really nice to be able to pull a basket and then 15 baskets later pull another that looks exactly the same.”

Head Grower Evan Schnabel agrees, and especially likes being able to cater different plants’ watering needs. “I do think it gave a better crop,” he says. “We didn’t have root rot or other issues, and we didn’t have soggy, wet, low-fertility issues.”

Zach says the system works well for various sizes of baskets too, making it easy to adjust for different containers’ water needs. “Larger pots don’t need quite as heavy a soaking early, while they’re rooting out, as they do later on,” he explains. “There are so many different ways to play with the OASIS system, and it’s as easy as pushing a button.”

Evan says the water by weight concept is extremely valuable. “The parameters I can set and the number of tests I can perform are reassuring,” he says. “The hanging baskets up on the line are much happier, and I know the flats of begonias under them are happy not to have baskets dripping on them every day.”

Hood’s has well over 50 basket systems running and plans to expand with OASIS into their other greenhouse sections, rolling to OASIS one range at a time, usually in full-acre ranges. The system has quickly become a must-have for Hood’s, and Evan.

“The accessibility of the people at OASIS and the user friendliness of the interface are the two key points for me,” Zach says. “I would definitely recommend it to other growers.”